Disney once again falls in line with China proving once again the Communist country has immense influence in Hollywood and Hong Kong. 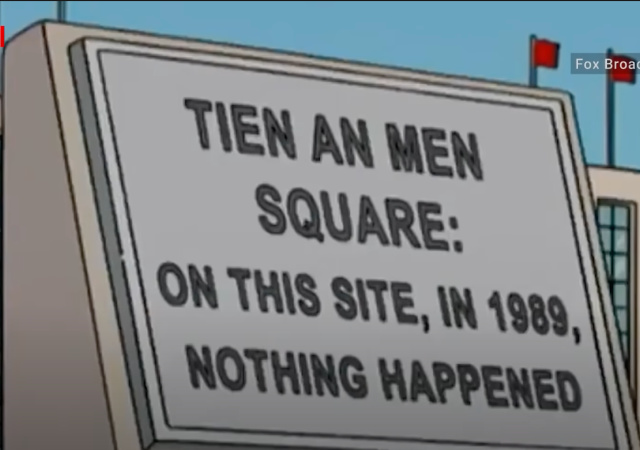 We must never ever upset Communist China. Never. Disney is fantastic at abiding by the rule.

It also has a line of tanks with one of Marge’s sisters in front of them, referring to the infamous tank man.

How do I irony? Disney is *litrally* doing what The Simpsons mocked China for doing about Tiananmen Square.

It also shows just how much influence China has on Hong Kong. The city has passed many bills limiting free speech, especially when it comes to insulting China. Oh, wait. I mean, “banning films deemed contrary to China’s national security interests.”

Do the laws apply to streaming services? It’s all too vague, with some people thinking the legislature will eventually pass laws targeting streaming services while the city said it already has laws for those companies:

The content rules governing streaming services in Hong Kong remain somewhat unclear, although analysts believe it’s only a matter of time before they are hit with the same restrictions that are undercutting the city’s once vibrant film sector and international journalist community. When asked in August whether the new film law would apply to online platforms, a spokesperson for the city’s Commerce and Economic Development Bureau told the Hong Kong Free Press that “other” laws apply to the internet: “[TV] broadcast and the Internet are subject to other applicable law and regulations. Whether an act constitutes a crime or otherwise would depend on its specific circumstances and evidence, and cannot be taken in isolation or generalized,” they spokesperson said.

In other words, Disney did this on its own. The Hollywood Reporter noted that Netflix still airs pieces that would never air in China:

Netflix nonetheless continues to host several pieces of content that would surely be banned from theatrical exhibition according to the new laws. Still streaming on Netflix in Hong Kong is Joshua: Teenager vs. Superpower, director Joe Piscatella’s documentary about the Hong Kong student activist who became the face of the mass pro-democracy movement that brought the city to a standstill in 2014.

As I said, Disney loves playing by China’s rule. In 2007, it cut scenes of Chow Yun-Fat as a bald scarred pirate in Pirates of the Caribbean: At World’s End “for vilifying and defacing the Chinese.”

China blocked Disney from releasing Christopher Robin in 2018 because activists made President Xi Jinping look like Winnie the Pooh in memes.

Oh, let’s not forget the whole Mulan debacle. Disney filmed Mulan in Xinjiang, where China enslaves Uighurs and other Muslim minorities in concentration camps. Then the company gave a “Special Thanks” note to government departments linked to those concentration camps:

Calls to boycott the live-action remake strengthened when audience members realised that Disney offered “Special Thanks” in the closing credits to government departments linked with Uighur detention camps. The Publicity Department of CPC Xinjiang Uighur Autonomous Region Committee and the Turpan Municipal Bureau of Public Security are both acknowledged at the end of the film. The former department is used to create state propaganda in the region, while the latter is accused of human rights violations for its involvement in the internment camps.

Is it truly communist influence? Or, is it simply Disney being a capitalist company, and satisfying the demands of the world’s biggest market?

Why can’t it be both?

But when you capitulate to an enemy for the sake of money, there’s a word for that.

Hong Kong Disney is a franchise. It is really Chinese Government Disney. The words in a contract mean nothing when dealing with Communist China.

I canceled my subscription when they whacked Gina Carano. Their new programming is shite anyway.

I cancelled my Disney+ subscription after I had watched all the old Disney movies that I had seen as a kid and they didn’t really offer anything new that interested me. (And no, a very bad remake of Mary Poppins didn’t interest me in the least.)

After they re-wrote Little Red Riding Hood as a lesbian werewolf who fell in love with dull-minded lesbian Dorothy from Oz, I decided they had abandoned the storytelling business for the propaganda business.

I started cancelling Disney when they rewrote American history with Pocahontas – a whole generation believes the Disney version.
I continued when they came out with Hunchback – I had just finished reading Hugo’s massive tome when the movie was announced, and I wondered how on earth they could turn THAT into a children’s movie. They can’t and didn’t.
I finished my cancellation when I had a small daughter and we discovered Barbie princess movies instead of the scantily-clad, helpless, stupid-but-kind disney princesses. Oddly, the Barbie princess movies have strong heroines, modest dress, and use classical music (the early ones anyway) and classical literature for their story lines. Who needs disney?
I am vindicated as my friends and family are slowly coming my way as disney continues their anti-family and anti-American values

Babies… fetuses under the bridge.

But now, on your good news channel:

Watch the hilarious, totally professional animated shorts being put out by a pissed-off ex-Disney animator, taking down Disney, the DNC, and more.

The Fauci one is my favorite (I’ve always loved that soundtrack)!