Goodwill, International’s DIE Director hired to “lead the development and promotion of DEI plans and implement workplace and initiatives and best practices” and “support the 156 local Goodwill nonprofit organizations in the U.S. and Canada by developing and curating DEI resources and strategies.” 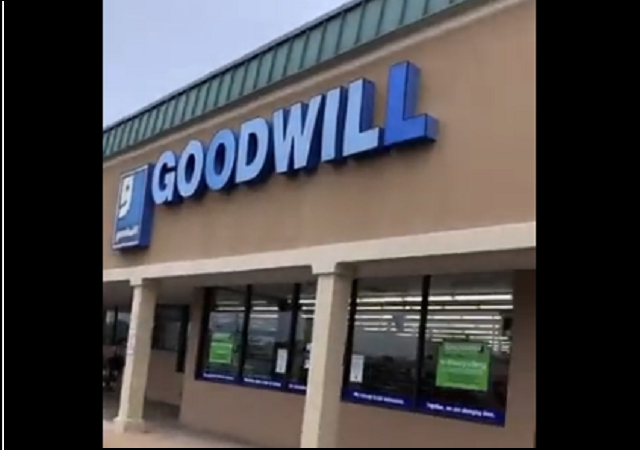 It seems that the Salvation Army is not the only charity leaping on the anti-American, racist, vile, and divisive Critical Race Theory handcart.  Goodwill has enthusiastically embraced this evil, hired a “Director of Anti-Racism, Equity, Diversity & Inclusion,” and openly brags about its “antiracism” quest on its website and in press releases.

According to former Goodwill of Southwestern Pennsylvania (SWPA) Retail Operations Manager Timothy O’Malley, his region first began discussions on how the company was going to be “different” following the 2020 presidential election.

“They stated that it was gonna be different and we were gonna make it about our community and our places,” he said. “That just turned out not to be true.”

O’Malley, who was employed with Goodwill for more than ten years, says that Goodwill of SWPA began holding “implicit bias training” for store managers in early 2021, which included a required “three to four hour” session led by a “racial equity trainer” in February.

“They started pushing us to recruit employees to be part of it,” he said. Implicit bias training is a common component of critical race theory and has been proven to be scientifically inaccurate to the point that some of the researchers who developed implicit bias tests have now repudiated them as wildly inaccurate and unreliable.

O’Malley also says he attended a “safe space meeting meant for asking questions” that same month, in which he raised “concerns” about the company’s woke policies that stemmed from Goodwill International’s recently fostered DEI initiative.

“I think they just assumed that I’d be on board with this because I foster children of all races and sexualities,” he said. “But I started asking questions about equality of outcome and equality of opportunity and I could tell that they weren’t too thrilled with me about that.”

“You were supposed to be able to offer your ideas, and so I suggested Thomas Sowell as an author to have some diversity of thought, and they told me that that’s not really what the DEI committee is about,” he added.

Goodwill International appears to be behind the push on regional Goodwill offices.

The implementation of DEI appears not to be limited to Goodwill of SWPA. According to O’Malley, the company’s national arm, Goodwill Industries International (GII), has been “pushing the regions” to adopt DEI policies.

In June 2021, Goodwill International appointed Dr. Samantha-Rae Dickenson as its new director of diversity, equity, and inclusion, to “lead the development and promotion of DEI plans and implement workplace and initiatives and best practices” and “support the 156 local Goodwill nonprofit organizations in the U.S. and Canada by developing and curating DEI resources and strategies.”

. . . . In addition to hiring Dickenson and establishing a National DEI Task Force, Goodwill International has also taken steps to become more “intentional advocates for change” following the death of George Floyd. In May 2021, CEO Steven Preston confirmed that he signed the “CEO Action Pledge” in order to “provide a more supportive and inclusive workplace.”

According to the pledge, CEO’s commit to implementing and expanding “unconscious bias training,” which aims to help “employees recognize and minimize their blind spots” and to “facilitate more open and honest conversations.” CEO Action had previously hosted an event headlined by author of “White Fragility” Robin DiAngelo, who provided “insights on how to be #antiracist.”

The materials used include pushing the anti-American 1619 Project, all the usual suspects on the racist “antiracism” reading list, and “Goodwill pledging to ‘only create merchandise’ that represents members of preferred races.” You can view the materials that were obtained exclusively by the Federalist here.

Lemmings. They are all lemmings.

Lemmings don’t try to push non-lemmings off the cliff, too.

Well, actual lemmings don’t knowingly run off cliffs either. We’re talking about the mythical lemmings of the Disney film, so who knows what they do. Real lemmings only fall off cliffs when they don’t see them in time to stop running. Which is easy to do when you’re only a few inches tall. They swim out into the ocean because they can’t tell the difference between an ocean and a river or lake, and experience tells them that if they keep swimming they’ll reach the other side.

Either will my donations as I don’t support Marxist’s,go Marxist Woke go Broke.

We need to get the course materials for the racial equity training sessions. I bet that they would be a hoot to watch and critique.

Is Goodwill admitting, like Salvation Army did, that they’ve been a bunch of misogynistic racists all along, and now they’re going to clean up their act?
Time to go back and look at any public grants they received, and revoke any grants that required them to promise not to discriminate.

Just like with the colleges who have said they have contributed to “systemic racism,” they should have to pay back all their grants that required nondiscrimination. They’ve admitted it.

Is there anyone with the moral authority to stand up and tell every to “STOP THE MADNESS” ?

These people believe it is acceptable to be racist – as long as it is directed at what ever skin color is currently out-of-fashion.

Goodwill’s problems go far beyond CRT, in my opinion, it really is a scam enriching one person.

Still cheaper than going to the dump.

Maybe to get rid of your stuff. To buy stuff, they’re anything but cheap. They’re the most expensive “thrift” store in any town we’ve ever found them in.

Really? I bought my favorite shirt at one for $3. That was a while ago, though.

Yet another place not to spend your money.

Yeah, well, we’ve already dispensed with Goodwill as a destination for donations, and I doubt that many here actually shop there, so this particular article can be safely ignored.

Apparently the Salvation Army has moved in a similar CRT direction and is losing long-time donors because of it.

All these outfits are supposed to be in their words doing the most good seem to be doing anything but. WE should even know your politics if you looking for donations.

Purple Heart, all the way.

This is what they think of us they are woke.

“Goodwill” became a sell-out phony “non-profit” long ago. That they’re toeing the CRT line is of no surprise. No balls, shameless profiteers.

I get a clothing allowance at work and I spend it up before years end if I haven’t already, so I had some brand new pants, 5-6 pairs, never worn, tags still on them and their stores wouldn’t give me a dime for them. Cause they’re a non-profit….but the people at the top just take any $ they’re over and pay themselves so they qualify as non profit. Tax the rich? What a joke. Start making colleges pay taxes. And investigate all these pasy-walsy relationships between politicians and finance douches.

Sickening, certainly. I humbly suggest to my friends on this site that if you are looking around for a righteous charity to send some hard-earned money, please consider https://mission22.com/. On average, 22 US Veterans a day commit suicide and that imho is just unacceptable. Had my own brother gotten a little help from an outfit like this instead of getting pumped full of pills by the VA he might be alive today. Like I said, just give it a look and judge for yourself. I would be very thankful if you did.

If it weren’t for racists there would be no racism. Racists continually accusing innocent people of being racist when they’re not is The Problem not the solution.

i shop at Goodwill often and have never seen a black employee. I believe because it is a very low cost operation, few if any blacks apply.

They done lost they all’s mind.

I predict that very soon Charity Navigator and other such charity rating organizations will include a Social Justice score in their analysis of how trustworthy a charity is. It will include whether CRT is offered and is an Equity whatever person is part of the outfit.

Good will is NOT a charity. Its owned by one man. He makes HUGE profits every year.

Crossing Goodwill off the list too. Clearly, their executives increasingly are SJW‘s, not business people.

I always liked my local thrift store better anyway. Many donors bring them items that other people would sell on eBay. Good quality stuff.

The funny thing is, if certain items at this thrift store go unsold after a certain period of time, the thrift store donates them to Goodwill or Salvation Army!

Crossed off my donations list. Did the same to Salvation Army. Pity.

I hope Charity Navigator does include a DEI block in their analysis so I’ll know which seemingly-worthy entities aren’t.

Good will used to be a benign expression, taken to mean good will for Everybody, no exceptions. Now Goodwill has corrupted it to mean good will only for its converts and acolytes, all others being Wrong People and, of course, racists.

This is not the way to foster good will.

I’m guessing for the VP of Diversity they hired a white, Christian male . NOT

This is an entirely predictable development. I think it was Robert Conquest who said, “All organizations that are not explicitly conservative, will eventually move left.”

Theologically speaking, the SA subscribes to the doctrine that humans can save themselves, or at least contribute toward saving themselves. It is inevitable that people who think they can save themselves begin to view their own judgment and abilities as more powerful than they really are, thereby believing that they can save others by imposing their enlightened views on those who must be saved.