“When I saw the president yesterday, he wasn’t just wide awake, but he was really on fire.” 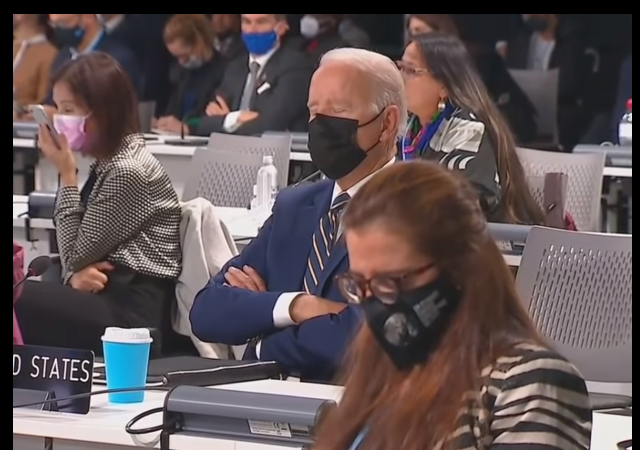 Legal Insurrection readers may recall that Gina McCarthy was Obama’s Environmental Protection Agency (EPA) head when agency representatives apparently took it upon themselves to resolve a long-standing issue at an old mine.

The crew breached a debris pile that was holding back contaminated water. The result was Colorado’s Animas River disaster in 2015, which released 3 million gallons (11 million liters) of wastewater that made its way into the Animas River and eventually impacted water quality in 4 states.

Environmental Protection Agency Administrator Gina McCarthy apologized Tuesday for a mine spill in Colorado that her agency caused last week and planned to travel to the area Wednesday, amid increasing criticism from lawmakers about the EPA’s response.

Ms. McCarthy said at a news conference in Washington that she was still learning about what happened, responding to a question about whether the EPA was reviewing changes in how it cleans up old mines. “I don’t have a complete understanding of anything that went on in there,” she said. “If there is something that went wrong, we want to make sure it never goes wrong again.”

Unfortunately for the country, McCarthy is back. This time she is the White House National Climate Advisor. She is at the COP26 climate summit in Glasgow this week, where cameras captured this golden moment.

Showing the same the level of astute assessment did in 2015, McCarthy swiftly came to Biden’s defense. She insisted he was “on fire”.

‘When I saw the president yesterday, he wasn’t just wide awake, but he was really on fire,’ she told Morning Joe’s Mika Brzezinski without prompting. ‘He’s really excited to have the United States in action here in Glasgow.’

Brzezinski didn’t ask McCarthy directly about the video of Biden that went viral, where he looked to be dozing off as one speaker underscored the importance of taking action on climate change.

He opened his eyes and appeared to liven up when his body man walked up to him to chat.

The 78-year-old Biden then sat forward and rubbed his eyes as Italy’s prime minister took the stage.

If by “on fire”, she meant dumpster fire, perhaps McCarthy has a point.

And since I brought up dumpster fires, I would like to note that the owner of the Colorado mine has recently sued the U.S. government, seeking nearly $3.8 million in compensation for using his land in its cleanup.

Todd Hennis claims the Environmental Protection Agency has occupied part of his property near the Gold King Mine but hasn’t compensated him for doing so since the August 2015 spill, The Durango Herald reported. He also contends that the EPA contaminated his land by causing the spill, which sent a bright-yellow plume of arsenic, lead and other heavy metals into rivers in Colorado, New Mexico and Utah.

In the lawsuit filed Tuesday in the U.S. Court of Federal Claims, Hennis argued that the EPA’s actions have violated his Fifth Amendment rights to just compensation for public use of private property.

An EPA-led contractor crew was doing excavation work at the entrance to the mine when it inadvertently breached a debris pile that was holding back wastewater inside the mine.

Of all the Obama-era appointees, it is hard to imagine one who did more damage to the nation than McCarthy. It is clear the only environment she wants to protect surrounds the Deep State.

On fire – like the toxic waste dump EPA she ran

… and don’t spare the beans.

Or lull you to sleep. Rock a… bye Brandon.

The likes of this GIna McCarthy are running the show, not puppet Biden.

Dotard Xi-den “on fire” must be some sort of slow burn — akin to the dying embers of last night’s fire.

He’s not dead; he’s pining for the fjords.

To be fair, listening to Gretta could put anyone to sleep.

That must be what she meant.

Fortunately, the WOKE awakened the masses to their DYSTOPIAN plans.
Just wait until the parent in ALL STATES get to VOTE.
The Dems have a wakened a movement.

Today, I saw the Corrupt Media continue to GASLIGHT the moronic WOKE who are too afraid to look elsewhere for news and therefore live in perpetual fantasy land. Anyway, the Media head line said that Virginia showed that WHITE PARENTS are resisting the teaching of anti-racism. What a load of SHIT. They should be arrested for such lies

How to Calm Down a Bird

To increase your carbon dioxide, you need to take in less oxygen. To accomplish this, you can breathe through pursed lips (as if you are blowing out a candle) or you can cover your mouth and one nostril, breathing through the other nostril.

For a green planet and calmer Joe… emit.

When they noticed he was asleep, they sent an aide to pretend to give him a message. Biden got all “fired up” at the aide for waking him up from a sound sleep.

Leave it to America’s most inept environmental administrator not to know the difference between sawing wood and burning it.