Danchenko “purportedly had received from an anonymous caller who he believed to be a particular individual, when in truth and in fact he knew that was untrue.”

The FBI has arrested Russia analyst Igor Dochenko for allegedly lying to the agency about information sources he helped bring together for Christopher Steele’s infamous dossier.

The Democrats used the dossier as proof that former President Donald Trump colluded with Russia to steal the election in 2016.

Special Counsel John Durham has been investigating the origins of that probe.

The 39-page indictment accuses Danchenko of lying about his Russian contacts and travels to the country. The interviews took place between January and November 2017. It also indicates Steele used him as a primary source:

The March 16, 2017, May 18, 2017, Oct. 24, 2017, and Nov. 16, 2017, counts involve statements made by Danchenko on those dates to FBI agents regarding information he “purportedly had received from an anonymous caller who he believed to be a particular individual, when in truth and in fact he knew that was untrue,” Durham’s office said Thursday.

“The information purportedly conveyed by the anonymous caller included the allegation that there were communications ongoing between the Trump campaign and Russian officials and that the caller had indicated the Kremlin might be of help in getting Trump elected,” Durham’s office said in a statement.

“Company Reports” in the indictment refers to Trump’s supposed ties to Russia: 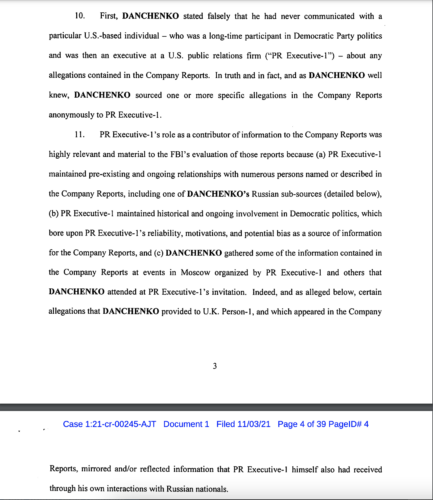 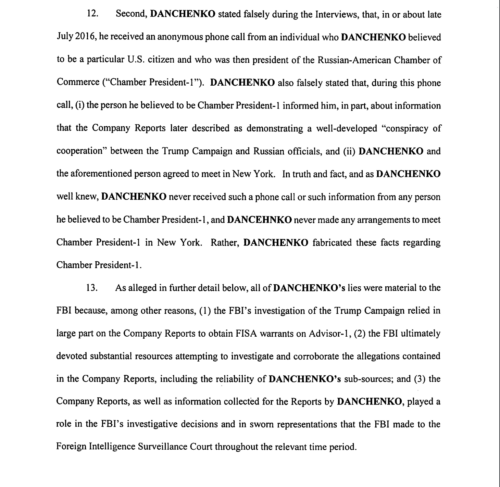 The Democratic Party paid for Steele’s research. A lot of the dossier has been unverified.

Danchenko is a Russian citizen but lives in the U.S. legally.

US v Igor Danchenko by Legal Insurrection on Scribd

Mueller spent how many millions over two years and missed this?

So the FBI has just arrested a Russian agent whose actual dirt is on Democrats? Wonder what young whiz kid decided to saddle THAT tiger?

Epstein Danchenko did not kill himself.

Nor did Vince Foster. Oops, Mike Walllace said he did!! And we ALL know that CBS “journalists” are fair and square, don’t we? ROFLMAO

And as the indictment indicates, the Washington Post knew exactly who the primary source was (a Russian agent) from the very beginning and yet, they still disseminated the propaganda, enthusiastically.

Clearly, “PR Executive-1” is in a boatload of trouble.

Fiona Hill giving an acknowledgement in her book to Charles Dolan, aka “PR Executive 1,” who she also allegedly introduced to Igor Danchenko.

And then Hillary’s campaign told Steele what to put in it.

It wasn’t Russian insiders feeding Steele the disinformation he then put in his dossier. Which is what many thought that last 3-4 years.

It was people working in Hillary’s own campaign. Hillary’s campaign fabricated and wrote the Steele dossier. And then used Steele and Fusion to launder it and pass it on to the FBI and the Dem-media propaganda complex.

Will the NYT’s ‘journalists’ give their Pulitzer back now?

How did the FBI not know the Steele dossier came from Hillary’s campaign? Answer: They knew and didn’t care.

How could Mueller’s team have missed this? Answer: Because some of them either helped write it or knew where it really came and were on board with objective.

“How could Mueller’s team have missed this?”

A bombshell that anyone who has paid attention knew a year ago.

The Counts only go to the false statements about the Chamber of Commerce guy, while the Indictment refers to many other false statements. Not sure why this is, but assume Durham is on the right track.

Hopefully, the FBI will be accountable, and the media players, too.

He is charging the small players a few at a time and is going to plea them to get at the real players like Hillary and her team. I hope that she is still friends with that sleeze Mark Elias but he jumped ship from Perkins ahead of this so no love from that direction I’m thinking.

I think for the reason I posted.

who’s next in line to fall?

Durham is slow, too slow for the last election but it appears he is methodical and is turning the screws.

My sense of this story today is both Fiona Hill and Charles Dolan are freaked out and on the phones with their lawyers tonight.

But, they won’t be indicted just yet. Instead, to determine where Durham is going next find out the names of Hill’s and Dolan’s assistants. Why? Assistants are always seated at the butt end of delegation. They will tell us who worked for whom, they heard the phone calls, participated in meetings, read all the emails, and put the heat in them to talk.

I eager for Igor to be prosecuted.

Elias is behind the big steal.

Durham may be target #1 for this insane jab mania. These Marxists would kill everyone to get this guy.

There was a lot of Twitter chatter overnight over John Durham’s indictment of Igor Danchenko.

One of my favorites is: “If anyone knows Fiona Hill let her know I can get her a great deal on pillows so she doesn’t lose sleep over what’s about to come her way.”

Wish that had come from the My Pillow guy

So, Marc Elias, the Perkins Coie lawyer who has been indicted by the Feds, stated to the FBI that he was not representing any client when he reported the [fake] Russian connection. So, it would logically follow that his non-client would take the position that emails from him were personal, not business.

So how many of Hillary Clinton’s now deleted 30,000 emails were “personal emails” about Elias, the FBI and Danchenko? (I’m gonna go with “most of them.”)

What did Adam Schiff know and when did he know it?