Critical Race Theory Defender at TX School Board Meeting Says He Has Over 1,000 Soldiers “Locked and Loaded”

Critical Race Theory Defender at TX School Board Meeting Says He Has Over 1,000 Soldiers “Locked and Loaded”

“This gentleman was profoundly angry, he was not putting on a performance” 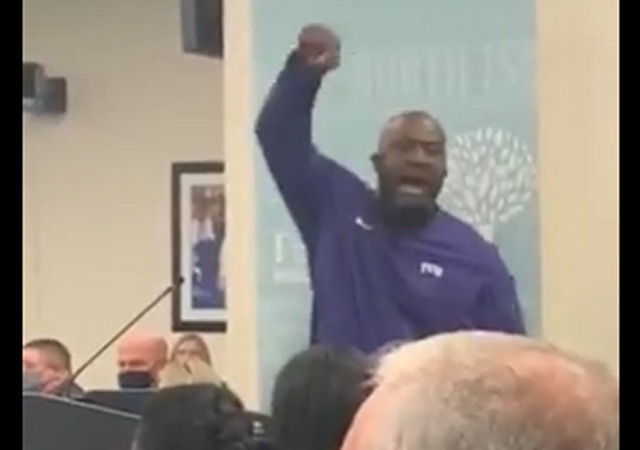 A proponent of Critical Race Theory erupted at a school board meeting in Fort Worth, Texas recently. Malikk Austin told people at the meeting that he has “soldiers” who are “locked and loaded.”

Will Merrick Garland and the Biden Justice Department respond to this in any way? They called parents who are opposed to CRT in schools ‘domestic terrorists’ after all.

‘I got over 1,000 soldiers ready’: Texas parent escorted out of school board meeting over critical race theory

Several parents were left feeling “threatened” during a Nov. 9 school board meeting after a Texas parent supporting critical race theory stated that he had “1,000 soldiers ready to go.”

Malikk Austin, a parent of a child in the Fort Worth Independent School District, turned to address the parents in opposition to critical race theory, Fox News reported . Austin blasted the parents stating that “this is something” he fights for as his children are still “afflicted by this.”

“For those who got an issue with this critical race theory equity, this is something I fight for, for my children,” Austin reportedly said during the school board meeting . “How dare you come out here and talk about the things that my daddy and my grandparents went through,” listing things such as Jim Crow, lynchings, and the oppression…

“I’ll bring my soldiers with me next time … locked and loaded,” Austin stated as he was being escorted out of the meeting by officers. Plemmons reportedly questioned whether he had been addressing her, to which he replied, “locked and loaded.”

FORTH WORTH, Texas – Malikk Austin, a pro-CRT defender and member of an armed Black militia, threatened parents at a school board meeting, saying he’s got 1,000 soldiers who are “ locked and loaded”. pic.twitter.com/LhC65KZAcm

You can hear the reactions of other people in the room who clearly felt threatened.

Fort Worth parents told Fox News that they felt threatened when a parent who defended critical race theory turned to the crowd during a school board meeting and said, “I got over 1,000 soldiers ready to go,” before adding, “locked and loaded,” as officers escorted him out of the room.

“Absolutely, it made me feel threatened,” Hollie Plemmons, a stay-at-home mother of three, told Fox News on Sunday. “I’m scared and I’m afraid he’s going to do something.”…

“This gentleman was profoundly angry, he was not putting on a performance,” Guarneri said. “When he made the statement that he had his thousand soldiers and they’d be back locked and loaded, it was very frightening to me.”

“I was thinking about calling my husband and having him come to the parking lot because I was afraid to come to my car,” she added.

Malikk is apparently a member of a black militia group:

If the @FBI and @TheJusticeDept do not launch an immediate investigation, it proves that Garland's actions were purely political—an attempt to protect the teachers unions and silence, intimidate, and smear anti-critical race theory parents. He should resign.

I’m sure the FBI – with CNN in tow – will raid this cretin’s home in the early morning hours to seek justice.

Not to make light of this, but we could use a laugh… https://youtu.be/bA-UPrK_x-k

Will NSBA will be sending letters to the Biden Administration ?

“One thousand soldiers locked and loaded”

Does that mean if we don’t teach CRT in school they will shoot us? Who are the domestic tear-or-ists here?

That is what it sounded like: “… teach my lies or I will cancel you !” Now the two questions are: 1) who is included in those he threatened, i.e., all who oppose CRT or only those who don’t look like him ?; and 2) do those soldiers include any of Austin’s military units ?

Coercion is an element of extortion

“How dare you come out here and talk about the things that my daddy and my grandparents went through,” listing things such as Jim Crow, lynchings, and the oppression…”

That’s the subject for a history class.

But what this man wants to do is teach young white children that they are responsible for that history. That they are born racists and have special privilege. That they must pay for that—-all of their lives and their children’s lives forever and ever. It will never end.

“Thousands of us have guns and we are locked and loaded—-so you little white children better look the hell out!

I attended public schools as a kid, in the south, and those things were taught to us, in multiple grades, and in great detail. And the topics were certainly not sugar-coated or glossed over in the public schools I attended.

CRT isn’t about teaching these topics, which have long been part of American public schools’ curricula. Instead, it’s about putting a racist spin on the topics, and brain-washing kids to believe that blacks are forever entitled to special rights and privileges because of past injustices, and that whites are forever culpable for past injustices, no matter how long ago the injustices occurred, and no matter how many things have been changed in the interim to address and remedy the injustices.

These are the oddest white supremacists I’ve ever seen. AG Lack-of-Merritt Garland, please crack down on these domestic terrorists.

Crickets from the left.

Be careful not to use the hand with bandages. Ouch!

Tell me about Ouch! If I move my hand just the wrong way the temporary covering shifts up against the area where they did their surgery and it hurts like the devil! Fortunately, I use a firearm equally badly with my left hand.

Bang bang sounds too much like a very old songs by Cher.

I got you babe!

Oh, please! Don’t remind me…! By the way Peabody how is Sherman?

Sherman’s in the wayback machine. Went back to see what life was like in the 70’s. Maybe listen to a little Simon & Garfunkel.

Undoubtedly he does
Unfortunately for him-they’re Hasbro….

A bully threat. Don’t fall for it. The only reason he showed up is because the check from the DNC cleared his account.

His violence is sanctioned by the government.

Your protests are not.

Merrick Garland is monster alright – but Biden is the ultimate monster.

“listing things such as Jim Crow, lynchings, and the oppression…”

All of that is in the past! We elected people.. passed laws.. it’s over.
Or at least was just about to be over until a certain political party realized it was far too valuable to let die.

The same party, I might add, who was responsible for said Jim Crow laws, lynchings, and oppression.

That, and particular ethnic groups, plural, who recognized that there is money to be made and extortion to be done by keeping it alive. I’m looking at the various “Rebrunns” and I’m also looking at organizations like the SPLC.

You mean Rebrunns wifout churches who jus make use of da title?

If Kyle gets acquitted, let’s send him down there to clean house.

I’m sure that AG Garland is running to the scene of an individual promising to bring ‘1000 Soldiers, locked and loaded’ to confront a school board. An individual who is reported to be affiliated with a racist militia no less. /S

This would be the perfect opportunity for Garland to demonstrate that the DoJ isn’t acting in a partisan manner by at least investigating this clown but I won’t hold my breath waiting for him to act.

AG Garland is a fool

Merrick Garland is not a fool by any stretch of the imagination. He knows precisely what he’s doing.

There are two sides to everything. And Garland’s agenda is to screw one side and help the other.

Step up, homie.
Put your money where your mouth is.

If memory is correct the primary problem with these militias is they march around loaded but NOT locked. At least if the # of negligent discharges are any indicators.

Actually the term has nothing to do with safeties. It comes from wheellock and flintlock guns, meaning that not only is there ammo in the barrel, but the firing mechanism is primed to fire, requiring only a pull on the trigger.

Hutu or Tutsi? Xhosa or Zulu? Kenyan elite or deplorable?

Baby or feminist? Well, the baby is innocent.

The Pro-Choice religion that denies women and men’s dignity and agency, and reduces human life to a negotiable asset?

Racism is a subset of diversity [dogma] (i.e. color judgment).

get back to me if he ever actually does something

not gonna play the “i’m aggrieved” card for this loser

This clown better check himself. Terrorists have a way of winding up dead when they try their shit in Texas.

So this guy is saying he has people ready to defend something that isn’t?

MSNBC says CRT does not exist – is not taught at public schools – only at law school in universities.

yeah, like this doda knows how to count to a thousand

This is getting old. Another low information hate filled black man supporting a racist theory and then threatening folks with violence. What is the difference between this black man’s rants and terrorists who shout
allahu akbar before and during violent acts ?

I think we just found our first domestic terrorist at a school board meeting.

Yes, threatening to use violence to affect political change is the very definition of terrorism.

The black guy complains about the way he is treated and makes violent threats about armed men with guns. Then compare the gentle way he was actually treated after making threats of violence with the violent and harsh way the white father of the raped girl was treated. It makes you wonder who is running the insane asylum.

If you’re wondering, you’re way behind the curve.

I was up all night wondering where the sun had gone…

And then it dawned on me.

If he was Republican he would already be sitting alone in a federal prison solitary confinement for that.

Showing up in fur for a photo OP gets you incarcerated.

Whatever. My experience with blacks leads me to believe they are just more talk than action. When the time comes to take action this thug and his 1,000 soldiers that are locked and loaded will be curiously absent. Guaranteed.

“…an armed Black militia, threatened parents at a school board meeting, saying he’s got 1,000 soldiers who are “ locked and loaded.”

Tell the local ER to prepare for about 75 cases of foot trauma.

Isn’t it illegal to make terroristic threats. Just like the two leaders of BLM who threatened the Mayor Elect in NYC, they should be arrested for making these threats and tried as domestic terrorists. Of course, that will never happen because they support the leftist ideology.

So when his “locked and loaded soldiers are cut dow, will he whine it was supremacists and a hate crime?

The fact he thinks xrt and teaching of history if the country are the same is laughable.

Where are the DOJ and FBI when they are clearly needed-to arrest violent Marxists such as BLM and Antifa supporters? MIA!

Arrest them? They’re probably on the FBI/DoJ payroll like those confidential informants who arranged the Whitmer kidnapping hoax.

Yeah, but does he have a thousand “bags and tags?” Things could get messy.