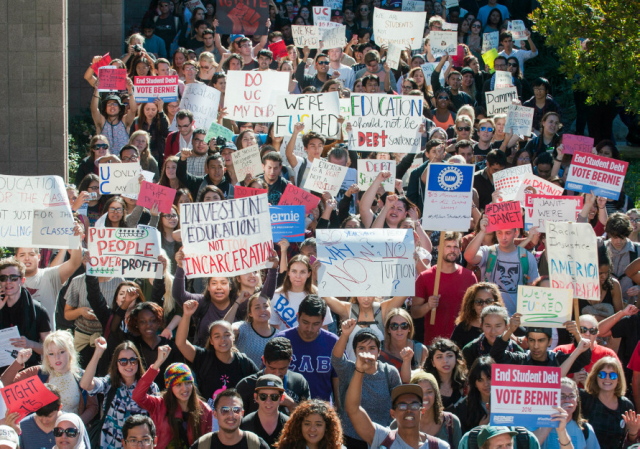 They are now at war with each other over accusations of racism and demands to resign. They are essentially engaged in a feeding frenzy of wokeness.

The battle is so unhinged that the Democratic National Committee is considering severing itself from the organization.

Allegations of bigotry and calls for impeachment rock College Democrats

The kids are not alright.

The College Democrats of America — the Democratic Party’s national organization presiding over 500 chapters on campuses across the country — is in turmoil.

The group’s leaders are publicly firing off accusations of anti-Blackness, Islamaphobia and anti-Semitism at each other. Impeachment proceedings are now in the works against the organization’s new vice president, Nourhan Mesbah, who is Muslim. College Democrats say that screenshots of tweets that their peers sent in adolescence spread rapidly through group texts, which already caused a student running for president of the group to withdraw their candidacy in September. And national advocacy groups for Muslim and Jewish Americans are now weighing in with criticism.

The conflict has gotten so messy that the Democratic National Committee is considering disaffiliating with the national collegiate organization altogether and creating a partnership with the state groups underneath the national umbrella, according to a Democrat familiar with the discussions. The DNC declined to comment.

A lot of this is being driven by people digging up things members said on social media when they were kids. In other words, cancel culture has come home to roost:

The controversy began in September when Tasneem Ahmad Al-Michael, a Muslim and former vice president of the CDA abruptly ended his presidential campaign after a 2014 tweet in which he used a racial slur resurfaced, CDA members involved in the election said. He said the subsequent attacks on him and his campaign team prompted him to pull out of the race. “What I said as a 15 year old prior to being in politics was ignorant, inappropriate, and flat out wrong,” Al-Michael said in a text message to POLITICO. “It doesn’t define me, my character, or invalidate the work that I continue to do.”…

A 13-year-old at the time, Mesbah wrote, “I blame this debate on the yahood,” an Arabic word which is sometimes used as a slur against Jewish people. She also tagged another user with a history of anti-Semitic tweets.

None of these students will ever be perfect enough for each other. This is a glimpse into the future of the Democratic party.

Journalist Glenn Greenwald summed this up well, calling it the “ultimate reaping of what they’ve sown.”

They're destroying each other over tweets and other postings from when they were 13, 14 and 15.

Left-liberal spaces have become utterly toxic: mostly for those inside of them. It's a totally self-immolating climate. Nobody can survive it. Ultimate reaping of what they've sown: https://t.co/jiZcVE8B7r

"Impeachment proceedings are now in the works against the organization’s new vice president, Nourhan Mesbah, who is Muslim…."

Look at the living hell they created: an inferno bereft of grace or empathy, meant to contaminate all institutions but first consuming all of them: pic.twitter.com/HDr6jbUClc

Again, this is the Democrats’ future.

It’s difficult to decide which element of this story is the worst. Bad tweets from teenagers are certainly a nonstory, but college students embracing the media strategy of using them to destroy political opponents is clearly an issue. That Mesbah was mostly unapologetic and went on to accuse her opponents of Islamophobia is clearly an issue, as are the unspecified allegations of racism against her. There are no sympathetic characters here.

But this is the future of the Democratic Party. As former interim President Matt Nowling said, “The college Democrats is a pipeline to the Democratic Party and the broader progressive movement.” The mindset that leads to Rep. Ilhan Omar accusing everyone who notices her antisemitic comments of attacking her for being a Muslim or to Democrats and liberal media pundits accusing everyone they don’t like of racism is the exact same one that has consumed college Democrats.

Perhaps the DNC could start distributing copies of the Orwell book Animal Farm to their student members to put things into perspective.

SOOOOO glad I “just said no” to social media from day one.

The Democratic Party should be a “big tent” party that should be welcoming to all. Candiates for office should be selected by an open process such as a primary, and not in a “smoked filled room”. The article makes plain that the smoke filled room is returning, but instead of having a fundraising threshold guarding the door, it is the IDEA police. (It was bad enough when it was called “Diversity and Inclusion” but as each day goes by we add more letters to the acronym. Could someone please explain to me why the College Democrats need a IDEA Committee and an IDEA officer? College Democrats should chose leadership in an open process, and of course alliances and cliques quickly form at their national meetings. Same thing is true for the Young Democrats.

If you inject truth serum into a College Democrat, the primary motivation for joining may be to meet people and find possible people to ask out on a date.
https://wjla.com/news/local/graphic-details-given-by-woman-accusing-lt-gov-fairfax-of-sexual-assault-at-2004-dnc

I’m sorry, but your first three sentences are hilarious.

I’m old enough to remember the D convention riots of 1968 in Chicago, when those very points were the issues of bloody contention between the hippies ad the hardhats. Old-guard Democrats ignored the hippies, selected Humphrey in a smoke-filled room, and got their asses handed to them.

Subsequently, they made huge apologies and promised that from now on out, the smoke-filled rooms were off limits. They would use primaries and make sure that every hippie and hardhat got equal say in who their candidate would be.

Of course, that chapped their style immensely, so within a few years, they learned how to schedule, gerrymander, miscount, and otherwise rig their primaries to obtain exactly what the people in today’s chardonnay-filled rooms wanted in the first place.

The culmination of this expertise, of course, is their current slate: the old man nobody really cared much for, and the giggling boob all the real people rejected at her first and only primary.

I say it’s hilarious because you apparently expect liars and cheats who have already perfected gaming their way past this very solution to somehow honor it anew.

Think of everything this country has endured, British (twice), Indian Wars, Spanish, French, Civil War, Germans (twice), Soviets and an historic attack on civilians by Islamic Jihadists. And yet, it’s looking increasingly likely we’re not going to survive the Millennials and the Zoomers.

The potentially unrecoverable decline of this Republic began when conservatives ceded academia to the progressives.

Well before that. It was when we allowed Progressives to take the reins of government in the Wilson and FDR administrations, and introduce socialist federal programs.

The Left can’t help itself. This is their pattern. But we on the right will not beat them by being conservative about it.

Glenn Greenwald has spectacularly missed the point. Purges, show trials and witch hunts are not some unwanted toxic side effect of Communism; they are vital to the survival of any Communist regime. Greenwald still believes he can have his precious Communism and not have it devour him.

The purpose of Communist terror is to install a permanent sense of guilt and shame in everyone except the top dog. This makes the masses easier to control since it eliminates the need for force in every single case of wrongthought. Get as many victims to denounce and punish themselves as possible, and your hold on power becomes virtually unshakable.

If you can point to any examples of Greenwald retaining Communist ideology, please point to them. Whatever he may have espoused in the past, he appears solidly red-pilled to me now.

Can we just cancel everything so we can move on?

The only way to survive the diversity olympics is by refusing to compete. Reject their Calvin ball games.

We only created that standard to attack outsiders, you’re supposed to be smart enough to never apply it to us!

I have observed many times over the past few years that the left has confederated a political coalition of various grievance and identity groups that don’t like each other all that much. Of course it is going to spectacularly implode, we just don’t know when.

It’s like watching a Godzilla v. Whatever movie. You know Godzilla is going to eventually take out Whatever… what you don’t know is how long it will take, and therefore how much of Tokyo will remain standing.

Perhaps the DNC could start distributing copies of the Orwell book Animal Farm to their student members to put things into perspective.

Animal Farm is much to nuanced for them to understand.
Besides, all the characters in Animal Farm are clearly racists .. at least to them.

Plus, there aren’t enough pictures.

The vile, contemporary Dhimmi-crats are brimming with Jew-hate; it’s their default operating ethos, now. And, they are welcoming Muslim Jew-haters into their tent, with open arms.

That’s how all these leftist revolutions evolve. After the French revolution guillotined the monarchy, they turned especially savage against their own.
That happened in the Soviet Union and China — all the early leaders of the Soviet revolution were murdered. They had to kill their comrades, because if they didn’t, then they themselves would be killed. Whoever pulls the trigger first, wins. There is no trust in revolutions. In America, we are going through a revolution. Whoever shoots first will end up winning.

Those College Democrats morphed into “Lord of the Flies” kids so quickly I hardly noticed.

Being white and explaining to ANYONE how someone else is being racist toward any minority group/person is condescending and racist as hell. I do not understand why any black, Hispanic, Indian,…. puts up with it.

This is the world in a true “democracy”, lol

The College Democrats are just following in the wake of the Russian Revolution.

They’ve won the cultural Grand Slam – so now they’re devolving into the Kadets, the Mensheviks, the Socialist-Revolutionaries, the Bolsheviks and indulging in the future mortal combat. Their Cheka has seized all the big journalist entities, and is preparing its shock troops and assassins and is querying Zillow for attractive Gulag sites. All they need is to identify their conclusive Great Leader. But who might THAT be?