If the couple was MAGA you know the media would have this story plastered on the front pages and make it the lede. 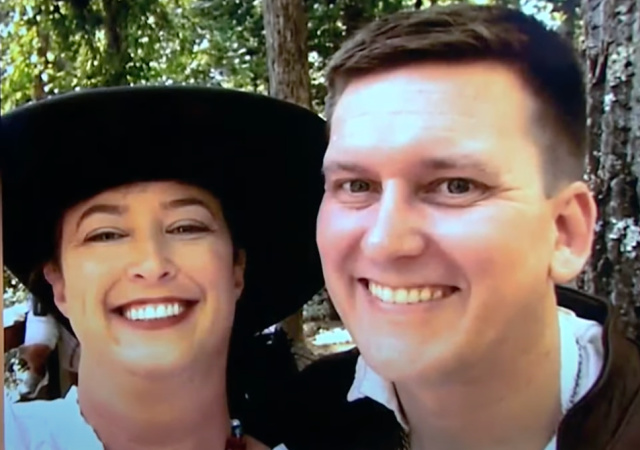 No wonder the media has buried the story about an Annapolis couple trying to sell top-secret submarine secrets to a foreign country.

The New York Times wrote an article about Jonathan and Diana Toebbe, but buried the lede they would have started with it was the opposite: Mrs. Toebbe is a far-leftist.

Toebbe taught at the progressive Key School for 10 years where she did not hide her politics (emphasis mine):

“You could just tell she was insanely smart,” said Craig Martien, 20, a 2019 graduate of Key School who worked closely with Ms. Toebbe on the yearbook and an after-school anthropology club. “She was very friendly and down-to-earth, and I got along with her very well.”

When Mr. Martien went off to Williams College, he brought along a toy squid that Ms. Toebbe had knitted. Like other Key graduates, Mr. Martien described her as a strong feminist and very liberal.

She was taken aback by President Donald J. Trump’s 2016 election, he said, and mentioned several times that she was considering moving to Australia.

“She said she couldn’t stand the current state of politics and actually had found some job opportunities over there,” he said.

The Times did not mention Jonathan’s politics.

The hearing only took five minutes. The judge did not ask them to enter a plea.

Reports say the Toebbes did not have any financial distress, which could have been a motive. However, the judge decided both qualified “for a court-appointed lawyer.”

I suspected Leftists straight away, no Trump supporting pro American eating apple pie would do it.

I would add driving a Chevrolet, but most of those are now from Korea or Mexico.

Does it matter if all the aftermarket parts that will lift my ‘stang over 500 rwhp are made in America?

I was going to go with the supercharger. But then I was like, you know what? The cat back exhaust and K&N intake make this car already fun enough for me to commit several felonies. I’m just going to add the 62mm throttle body (intake), EPA approved headers and x pipe AND the nitrous plate system and call it a day. I think maybe I’m looking at a day’s worth of work. I start in the morning and I’m at the steak house by 6.

I mentioned the EPA cert because I do like to remain legal. The throttle body has a C.A.R.B. EO number. The exhaust has an EPA number. I don’t give a sh*t about Greta Thunberg I just hate getting fined.

If Derek Chauvin had sold military secrets to an enemy rather than kneeling on an agitated drug addict, perhaps the court would have allowed him to have a court-appointed attorney too.

The Political Persuasion was Obvious – No Headline Needed

Any story that is one-and-done in the media has at its core, a Dem
vs week-long breathless coverage, which involves a Trump supporter

If the FBI fingered them, then my instinct is to say they were framed.

Moreover, if Diana Toebbe really was as left wing as the reports say, why would she sell out her country? Her precious Communist Party was in control. It would be like Bernie! or Jane Fonda betraying the Soviet Union.

I don’t think we have the whole story – not by a long shot.

How do you frame someone for accepting an FBI offer of 100 grand in return for providing state secrets?

Even if as in McCain’s case it doesn’t satisfy the legal rigors for a conviction these are still people who in return for money (at least as far as they knew) provided high tech secrets to a hostile power.

The FBI does most things wrong and I think is definitely in disbandment territory.

Checking to make sure the people in uniform we rely on in a very serious way are actually loyal to this country and this flag is not among them.

She was certainly happy to enjoy the benefits of her husband’s government paycheck.

Tie them to trees and let them wonder when the bullet is coming. Traitors deserve nothing more. Or less.
.

Some points to make

1. People of all political stripes could turn out to be buyable unfortunately. Even if they had agreed with you on every issue that says nothing about their integrity when offered a bribe.

2. During a real war against a real opponent treason would be highly tempting. A real opponent as in one that sinks ships, causes actual heavy casualties, and destroys other war material Even if America is winning that wouldn’t be obvious and a real opponent by definition would have the money to buy you many times over.

3. If this had been a Trump supporter all the media would be talking about would be her politics. Remember that while the fight over schools is a must win fight so is the fight with the corrupt media.

A fish rots from the head.

And there is an epidempic of treason in our country at the highest levels (and lowest levels) of the democrat party and democrat elected and appointed officials).

So why shouldn’t these democrat cash-in?

Who exactly is the United States at war with, when did congress declare war and do our enemies have war planes, ships or capacity to even manufacture small arms? Oh right we aren’t at war with anyone so nobody is committing treason.

There isn’t treason and that includes the Democratic Party.

We are in a cold civil war, neither side of it is doing treason both sides hate the other, and both sides feel they are better for the country.

When you actively hate the country, it becomes a hell of a lot easier to sell it out.

Or rationalize hating your country so you can jump on the treason bandwagon and cash-in.

Very few people have ever been charged with treason in American history period.

But one case was a married couple who sold military engineering secrets to the USSR, also someone we were “not at war” with.
Convicted of espionage instead of treason, they got death anyway.
I’ll take it.

But not considered guilty of treason correct?

Russia obtaining nuclear weapons equalized it against the United States in the eyes of most Americans. For people who helped Russia gain that equality to not be traitors says lets not spam that term.

These two should be indicted and tried for treason

Get with the program… all the cool kids are doing treason now!

Funny how none of these deranged, nimby psuedo-liberals ever follows through on their vow to leave the U.S. cause their candidate didn’t win…