Every student that participated in today’s walkouts should take their activism directly to the next school board meeting and demand answers and mass resignations. 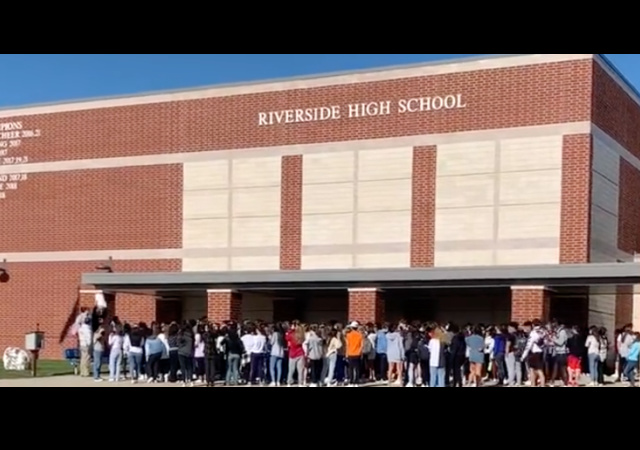 Students in Loudoun County have had enough. They’ve endured lockdowns, distance learning, all-day masking, and attempts to teach them a radicalized curriculum, all while their county’s partisan and inept school board declared war on their parents and failed to keep schools safe.

What finally moved the students to action, though, was the revelation that one of their own — and possibly two — was sexually assaulted inside a school, the very place kids should feel safe and secure. To make matters worse, the superintendent, Scott Ziegler, failed to inform parents and students that attacks had taken place, thus jeopardizing every student in the county.

Today, hundreds of Loudoun County students walked out of their classrooms, protesting the treatment of the victims, the victims’ families, and the student bodies of every high school, who were kept in the dark about the danger looming in their schools.

Listen to students at Broad Run High School shouting opinions on 2 sex assaults inside 2 different schools by the same student. One in May & the 2nd in October according to Loudoun County investigators. One student shouts “Why didn’t anybody tell us.” @7NewsDC #7NewsITeam pic.twitter.com/n8gV4CgSL9

The footage above is from Broad Run High School in Ashburn, VA, where an alleged sexual assault took place earlier this month. Irate students can be heard shouting, “Loudoun County protects rapists!” and, “Why didn’t anybody tell us?”

These are questions that Superintendent Scott Ziegler and every member of the school board need to answer. They all knew about the original assault that took place last May, and they did precious little to prevent the second alleged assault from happening. It goes way beyond dereliction of duty — these hyper-partisan bureaucrats and politicians deliberately acted in ways that put students in danger.

Video sent to me of the walkout at Riverside HS pic.twitter.com/NKYpsVWWTH

Every student that participated in today’s walkouts should take their activism directly to the next school board meeting and demand answers and mass resignations. This isn’t about petty partisan politics anymore, it’s about safety.

Interesting times in that VA Gov race. These kids are media/PR savvy members of the online generation. They are choosing to stand up and very publicly be heard knowing this would impact the Gov race.

IMO, this is good news. We have at least some coming behind us who haven’t been indoctrinated into keeping silent or towing the party line. By all accounts this particular school district has been in the progressive ideology business v teaching business for some time. That these kids have persevered and kept their integrity is a very hopeful sign.

Good for them! Wake up, America!

What’s really bad is that our country has been taken over by Communists. Hope the kids realize that also and do something about it.

Get woke have a stroke.

Speaking as a teacher, I tip my hat in honor of those Loudoun parents and High Schoolers. It was only a matter of time before such an assault happened. The “follow the science” crowd denying that sex and gender are the same has been one of the most incredible sales of emperor’s new clothes in history. In my system, we are told to have “courageous conversations” (translation: tow the LGBTQHEINZ57 party line or else)–and I see our setting up vulnerable young people for future sexploitation, suicide, or both; and then come the lawsuits.

Please, pervs–get back to your closets. You are not worthy of celebration, and you should do your recruiting elsewhere.

I wish college kids and graduate students had the same balls to stage walkouts, like at least for the rest of the school year.

Unfortunately, by the time most of them get to “higher ed” the damage is done and they have sucked down the progressive kool aid.

The shame of the matter is that it was about petty politics, to the board. They were in the middle of passing rules to allow individuals into whatever bathroom they chose. A report of on-going sexual activity between a cross-dressing male and a female in a girl’s bathroom wouldn’t advance that agenda, especially when the relationship later turned to rape. At a minimum. Lying about their knowledge of the event to open the bathrooms was petty politics, of the worst kind. So, who was the woman (board member?) who called the victim a liar to the victim’s father? I hope for 9 figures for intentional infliction of emotional distress.

This needs to grow exponentially

So each kid is assigned three agents from the federal bureau of instigation. Including the parents, that’s a lot of domestic terrorists.

Yes, but think of how big Biden can make the size of the government with more FBI agents he want to hire.

“Why didn’t anybody tell us?”

“I don’t think students should be telling schools to keep them safe.”

They won’t get in. The police and security staff let only 10 people at a time into the meetings. No bags.

PS. I should have said “into the building.”

” So, who was the woman (board member?) who called the victim a liar to the victim’s father?”

The whole board should have resigned.

It is astonishing that they would LIE to parents or be a part of LYING and not resign. Do people no longer have any sense of honor ? Of decency ?

A violation of the Clery Act might come into play here.

Nevermind….The Clery Act only applies to College campuses. I thought any campus, if it happened on school property, was responsible for reporting assaults to the populations most affected.

The students’ only mistake was that they walked back in.

It’s frustrating when people say that a political issue is not a political issue. There is a political movement that promotes criminality in general and sexual deviancy in particular, and it is called “Progressivism” and “Wokism” and its main political domicile is the Demonic Rat party. How can we fix things if we not honest with ourselves about who and what the problem is?

I hope this legitimate walk-out over a very serious incident doesn’t get lost in the dozens of silly walkouts they seem to have all the time over contrived micro-aggressions and such.