“Over the last several weeks, we have heard too many stories of selfish, inappropriate, and embarrassing student behavior at home football games.” 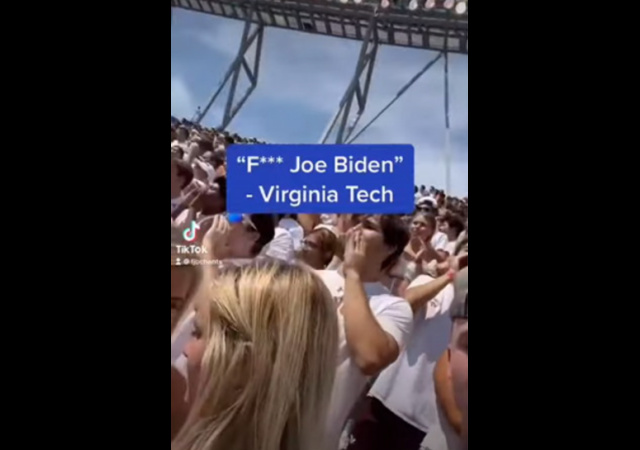 The administration at Virginia Tech is very upset with students who chanted ‘F Joe Biden’ at a recent football game. They have even decided to limit student attendance at future games as a result.

More to the point, does anyone on the left remember how absolutely horrible they were for four solid years under Trump? College campuses exploded with rage after the 2016 election. Is this chant really so awful in comparison?

Following reports about inappropriate student behavior at Virginia Tech home football games, university officials announced a number of new policies — including a limit on student attendance — that will go into effect for upcoming games at Lane Stadium.

According to a statement released by the university on Thursday, Oct. 14, only student season ticket holders and a limited number of student lottery winners will be allowed to go to the home game on Saturday, Oct. 16 and all future home games.

In addition, the Virginia Tech Police Department urges every student who attends these football games at Lane Stadium to take personal responsibility for a safe and positive fan experience that reflects the best of the Blacksburg community.

Witness the horror for yourself below. Obvious language warning:

MRCTV Has the statement from Virginia Tech to students:

Since last year’s election is in the proverbial rear-view, and some leftists finally have acknowledged that big, non-BLM and Antifa gatherings aren’t “super-spreader” events, it seems many establishment types think there’s another “super-spreader” conservative pathogen that needs authoritarian containment.

Indeed, the leftist establishment running Virginia Tech appears to disapprove of the viral popularity of the “F-Joe Biden” (aka “Let’s Go, Brandon!”) chant that has swept America…

It troubles us to write this message because of the high regard we hold for our students and the joy, curiosity, and excellence with which you embrace your education every day. Over the last several weeks, we have heard too many stories of selfish, inappropriate, and embarrassing student behavior at home football games. What we have heard falls short of Virginia Tech standards – and most importantly, creates an unsafe environment for all who attend.

Sure thing. As we all know, fans never yell, never chant, never sing in mass numbers at games.

Or, perhaps they almost always do – but this time, there’s something about what they’re saying that the VA Tech authoritarians don’t like, and which they now claim “creates an unsafe environment for all who attend.”

This chant and the fact that it has become a trend, is making Democrats nervous. It clearly bothers them.

Do you have any sympathy?

Sympathy is between shit and syphilis in the dictionary.

Doesn’t matter. The FJB chant is music to my ears.

It does have a nice ring to it.

You must be as old as me – shuffling around looking for the record store, wondering where it is.

The title is’ “Just Go Brandon!”

On the B side of “See The USA In Your Chev-o-lay.” Yeah, I’m an official codger, too.

They’re obviously under the impression that F- is a verb. It’s not. It’s an epithet.

It’s been studied by the best linguist in the world

Cunning linguist’s at that.

When will they condemn the “selfish, inappropriate and embarrassing” behavior by the Biden Administration.

The view of V-Tech seems to be that chanting is the problem – not the fact that Biden screwed up the Afghanistan exit or is going after Parents or is pushing to defund police or dividing the country by policies that make race and gender central to every decision. I could go on.

V-Tech is AntiSpe until it isn’t.

Biden screwed up the Afghanistan exit

policies that make race and gender central to every decision

Race and sex until they conflated sex and gender (i.e. masculine and feminine: sex-correlated physical and mental attributes) in a sociopolitical construct to afford trans/homosexuals a separate but politically congruent (“=”) buffer from more socially awkward bands in the transgender spectrum. That said, diversity [dogma], inequity, and exclusion.

The appropriate response from the students would be an empty stadium and a flood of requests for refunds from the season ticket holders. It’s all part of the process.

Yet the faculty has indoctrinated the kids for decades.

I’m sure it will be okay if they just switch to chanting, “Let’s Go Brandon!”

So who threatened to withhold donations?

The Democrats in the Legislature.

But is it rape-rape? h/t Whoopi. Depends on the hole… whore h/t NAACP.

What is Virginia Tech to do with all these “burdens”. h/t Obama

What difference does it NOW make? h/t Clinton It’s not like Planned President (PP) a la Libyan solution is a viable Choice.

Some good zingers here, thanks.

If limiting attendance is good, suppressing it entirely is better.
Boycott the games. See how well the jock department survives empty seats.

The administration at Virginia Tech has no reason to be upset. It’s all a big mix up. Someone needs to explain to them the students are not chanting “F*** Joe Biden”. They’re saying, “Let’s go Brandon.”

This should just about guarantee that the chant gets louder and longer, both at V-Tech and around the country.

Yeah, nothing works like forbidding an activity to young adults when they aren’t under your discipline. Young people have never been known to be rebellious./

They should gather in the parking lot.

The Tech students made me proud. The administration sucks.

“Do you have any sympathy?”

More unsafe than 250-lb players running into each other?

They do that to keep the dollars flowing from alumni. So, that is okay.

“Selfish” is an interesting adjective. Why is expressing this political view “selfish”, and if it is, since when are we not allowed to be selfish politically and try to influence the outcomes to our liking?

Isn’t that our system of government? These students are supposed to be selfish on political issues. Isn’t VT about preparing young people to be effective citizens with skills that promote success?

“Selfish” means expressing your own opinion instead of that of the officially-approved collective, and you are bound by a social contract we never showed you and you never signed, and shut up.

The totalitarians at Texas A&M had a similar freak out a few weeks ago. My spies told me some university administrators wanted to use phone recordings taken at home games to identify and expel the students chanting FJB.

But the “urge to purge” seems to have fizzled.

As always, the Left is about control, everything, all the time. The know how to live your life better than you.

After careful review of the footage, I can only hear “Let’s go Brandon”.
I can only speculate that the insanity brigade assumes Brandon must be a “cis-male white” and therefore it is inappropriate to cheer him on…

If you can’t get away with limiting the student’s First Amendment rights, just limit the students.

It would appear that a lawsuit against the university based on obvious, deliberate restriction of free speech is in order.

If the school really cracks down, then, the crowd should actually shout “Let’s Go, Brandon” Not the original. What can the admin do?

Can’t we please return to the good ole days when the crowd was chanting negative things about the football coach and demanding his resignation? Historically, football coaches were better paid than the college presidents. The big difference is that a football coach’s merit can be evaluated in a very transparent manner, while the “success” of a President is highly subjective and what he actually accomplishes requires the judgment of history years after-the-fact.

The decision to restart large-scale athletic events is an economic necessity for many colleges. The decision to regulate speech in a content-neutral manner quickly leaves the University of Chicago principles and dives into the uncharted swap of :political correctness.”

Where is the “true” Virginia Tech? Is it the in the anti-racism struggle sessions or is it in the collegiate experiences such as the football games, fraternity and sorority events and science labs?

“Historically, football coaches were better paid than the college presidents.”

Lou Holtz had a stipulation at Notre Dame that the head football coach could not earn more than the highest paid professor or the President of the University; and he was a priest who took an oath of poverty

“You can’t express unsanctioned opinions here! This is a university!”

Sympathy Meter stuck at Zero for these administrator thugs.

Actually, I’d love it if some students sneak into the broadcasting box, plug in some iPhone into the audio system, and play that hit rap song, “Let’s Go Brandon” during a football game. The optics will be genius. The people who pull this off will be considered heroes.

Time to stand up to the Naked Emperor and his Thug Minions.

Well this over all really good news. What to do when the students aren’t credulous dupes regurgitating Marxist BS from the academy? Oppression. The lefts go to solution for every problem.

Let’s Go Brandon
That’s what it is all about.

The thing that really worries the Virginia Tech administration is that the students they’re trying to indoctrinate in Marxism ridicule and revile the present Marxist government. We now have the most tyrannical, destructive, stupid and incompetent regime in the nation’s history, fronted by a senile man who was renowned as a liar, crook and idiot when he had all his faculties — and even the young and dumb can see it.

As opposed to those “selfish” TDS nitwits that accosted us with all their vulgar nonsense for 4+ years and still counting. The craven sanctimonious hypocrisy at play here on the part of Virginia Tech administrators is disconcerting, but, on the bright side, it’s always satisfying when the political worm turns. Let’s go Brandon!

2. In a perfect world universities will discover that politics has no place in a sports stadium. Just like they discovered that law and order and walls are good things; after January 6th.

Now that they’ve decided to, punish the entire student body for the acts of a few subversive Bud Light drinkers, it’s safe to assume that the taking of hostages by the administration and a few public executions are soon to arrive. Those chanting guys are dangerous! Shut ’em down.

It wasn’t “selfish, inappropriate, and embarrassing.” It was life-affirming, justified , and EMPOWERING.

Shame on VT for shaming student’s first amendment rights to free speech. It’s bad enough that a Once great University has become woke, but now they are attempting to control the behaviors of students who have paid substantially to attend. I say F VT.

“It troubles us to write this message because of the high regard we hold for our students and the joy, curiosity, and excellence with which you embrace your education every day.”
So we’re going to limit the number of you cretinous, unwashed hooligans attending the football game. Be warned! Any more of this crap & we’ll ban all students. Except for the football players, of course.

Let them be upset.