In reality. mankind does have the potential to impact the global climate…to protect it from a devastating meteor strike 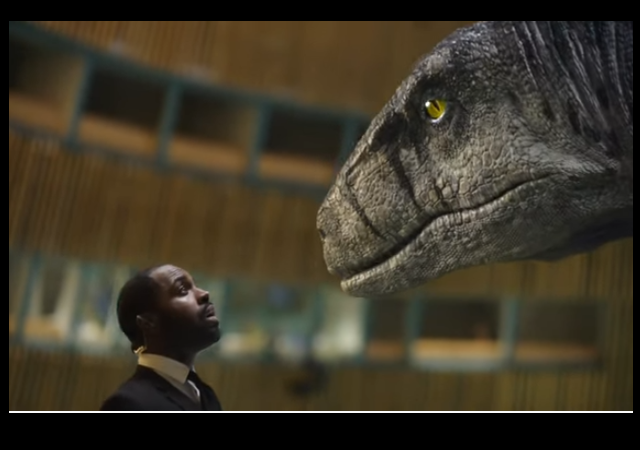 To gin up more “climate crisis” hysteria, the United Nations Development Program (UNDP) produced an ad in which a talking dinosaur bursts into the UN Headquarters in New York, with a special warning about fossil fuels.

Created by the U.N. Development Program, the comedic clip carries a serious message about how nations are driving themselves extinct by pouring billions more into oil, gas and coal production than renewable energy.

‘At least we had an asteroid,’ the realistic dino says. ‘What’s your excuse?’

Part of the agency’s Don’t Choose Extinction campaign, the PSA comes a few days before the start of the U.N. Climate Change summit, or Conference of the Parties (COP26), on October 31 in Glasgow.

The lameness is available in many languages. Comedian Jack Black voices over for the English version…but no language group is protected from the stupidity that promotes wealth redistribution to global bureaucrats.

It’s the first-ever film to be made inside the General Assembly Hall using computer-generated imagery, known as CGI, and features global celebrities voicing the dinosaur in numerous languages, including actors Eiza González (Spanish), Nikolaj Coster-Waldau (Danish), and Aïssa Maïga (French).

UNDP research released as part of the campaign shows that the world spends $423 billion annually just to subsidize fossil fuels, enough to cover a COVID-19 vaccination for every person in the world or three times the annual amount needed to eradicate global extreme poverty.

Legal Insurrection readers may recall several of my previous posts regarding extinction-level events, included one describing the Cretaceous era impact from a meteor that led to an actual global disaster, as well as four others (including the Permian event that wiped out 95% of all species).

I also recently reported a new National Aeronautics and Space Administration (NASA) test of the DART (Double Asteroid Redirection Test) mission that will try to nudge an asteroid and determine if such a move can shield Earth from a significant asteroid impact.

A recent virtual test showed that such an approach could work.

A team led by Patrick King, a physicist at the Johns Hopkins University Applied Physics Laboratory, ran 3-D simulations to see whether a nuke could provide planetary salvation. Like a wannabe Marco Inaros, a villain from the science fiction series “The Expanse” who schemed to bombard Earth from space, he hurled virtual 330-foot asteroids at our planet along five different orbital paths.

Powerful one-megaton nuclear devices were sent to greet them.

The simulations showed that when the detonation took place two months or more ahead of the projected impact date, it was sufficient to ensure that almost every asteroid fragment that survived the blast missed Earth. Any fragments that did reach Earth would probably be small enough to burn up in the atmosphere, said Dr. Bruck Syal, a study co-author.

In conclusion: Mankind can potentially impact the global climate…to protect it from a devastating meteor strike. So, instead of funding these preening bureaucrats, let’s pour it into more DAR-style research.

The only thing that needs to go extinct is the United Nations.

I would be willing to pay money to go toward a Jurassic Park-style cloning project to create a real Velociraptor we could send into the General Assembly. The outcome would be far less lame and far less destructive to humanity in the long run.

The ad received much deserved mocking on social media.

Did you tell that to China? What did they say? pic.twitter.com/EOqTMq2gCC

What happened to that Ice Age you promised me back in the '70s?

I agree with him and I'm not trying to cancel him or anything, but he has a problematic past. #Receipts pic.twitter.com/UtNOpdYrgK

This is the next step in the lying data they have been putting out for decades. Ice, CO2, temp every bit of data they use has met the standard of Lysenkoism. If you take their charts and actually research where they came from most are half-truths at best. No amount or totalitarian money grab with alter the Milankovich cycle or change the leading cause of warming ( dihydrogen monoxide) you know it as water vaper. The CO2 data shows we are in a dangerously low phase.

No doubt Dinosaurs caused climate change because the cars they drove must have been humongous.

The dinosaur’s message to us, “If you don’t watch it you will become extinct like us. We only ruled the earth for 165 million years. We could;ve made 166 million if we had someone like Greta Thunberg to warn us.”

Greta is useful for catching meteors and that’s about it….and she ain’t no Supergirl!

Did anyone think of the irony of having this anti-fossil-fuel message delivered by a… fossil fuel?

Dino farts.. they had to go

Just more and more feelings based drivel that is 180 degrees away from the actual reality that the availability of cheap, plentiful fossil fuels has done more to eradicate and alleviate global poverty than every government or NGO based poverty program in history combined.

From the availability of heating and cooling to the impact on food production, medicine and technology fossil fuels have provided the basic building blocks of wealth creation and misery reduction across the globe.

It’s Ok for them… just not for you.

Get with the program.

Here is the guy who answers all those questions. Well worth a listen (and a toast).

Meanwhile the planet has greened by a very high percentage in the last 100 years. Since 2000 the amount of land devoted to raising meat has declined by a surface area the size of Alaska. Water is cleaner. Air is cleaner. The USA actually met it’s Kyoto protocol targets.

And, extreme poverty has dropped from 2 billion to under 1 billion people in just the last 30 years.

Base your world view on data rather than Journalism. Journalism is a non-random presentation of the worst data points over any period of time.

Just give me the bear facts please.

Facts don’t enter into it. Anyway you look at it, this is a grizzly situation. Lots of trouble bruin.

It was cold in the southern hemisphere this summer.
ANTARTICA experienced the coldest temperatures in recorded history.

Yes the planet has warmed a bit, on average. But politicians are trying to convince us all that the point-of-now return tipping-point is in 8 years. They only have one problem – there is no scientific data that supports the 8 year mark. The party of fantasy (men can have babies) is trying to claim they are guided by science.

Ah, come on Ben. I suppose next you’re going to tell me Greta Thunberg is not a real scientist.

I’m not sure that the strongest drugs known to humanity, whether they be Alzheimers, opiates, hallucinogenics, euphorics, nerve gases, or ricin, could save the Biden presidency.

Kamala said she’s ready to sit in the captain’s chair.

The captain’s lap is not the same thing, honey.

“In conclusion: Mankind can potentially impact the global climate…to protect it from a devastating meteor strike. So, instead of funding these preening bureaucrats, let’s pour it into more DAR-style research.”

This is complete BS reporting by someone who doesn’t even understand the physics behind deflection and the distances and sizes involved. Asteroids are like boats. Make it a little longer and the size of the boat increases dramatically.

If we just want to push the asteroid out of our path, we will need technology that could provide a significant push for periods of around 50 or 100+ years. That’s not feasible if it’s an asteroid coming straight for us and will hit in less than 40 years.

Seriously people, read the articles and then read the physics behind deflecting asteroids before you accept this author’s BS that we can protect the world from a climate changing asteroid like the dinosaur killer.

No one knows what caused the dinosaurs to become extinct. There are many theories and this theory is the most recent. But agreement over dinosaur extinction is far from unanimous, And no doubt there will be more theories in the future.

What is amazing is that dinosaurs stomped all over this planet for million and millions of years (anywhere from 150 to 200 million years). Instead of asking what caused them to become extinct, we ought to be asking how did they last so damn long?

Another waste of Other People’s Money.

Who cares what the UN says.

The UN has outlived whatever usefulness it may have once had. The UN was created to prevent WW III. It has since been totally corrupted.

It has become a tool used by international globalist leftists attempting to acquire undemocratic unelected power over the globe. Their thirst for power is insatiable. Shut it down.

It should be discretely ignored except when it suits our purposes. When it is useful. And told to piss-off when it is not. Which is how every other nation on the planet uses and deals with the UN. Like China, and Russia, for instance.

The UN was formed to be a forum in which sovereign countries could debate and come to agreements. As do all political entities, it fast became a haven for sociopaths who thought they had been called upon to supersede governments and govern all of humanity directly as their subjects.

Is this the same summit meeting where they using diesel generators to charge up the Tesla is the using to go back-and-forth between the conference in their hotels? Or is this a different one?

Dinosaurs are to extinction as diversity [dogma] (i.e. color judgment) is to what… [social] progress?

On a different note, it is amazing how real that Dino looks

He is cute isn’t he?

Uh…you’re assuming gender. Ten lashes with a wet spaghetti noodle, and back to the re-education gulag for you.

I would be deeply worried about this if it were not for the fact that I and everyone else in the state of Texas was savagely killed by gunfire five minutes after Constitutional carry became law. The media said were were all in terrible danger, and they are dispassionate non-partisan fact-checkers, yes?

Or were we killed by the end of Net Neutrality? I lose track of all the different ways the media says we are certain to be killed.

Who was the unfortunate janitor who had to clean up after the dino? He dumped a real load when he was behind the podium. No, not a pile – all the politically slanted crap he was saying.
.

Thank God it was a Raptor. I thought it was a Jehovah’s Witness knocking on the door.

Worst of both worlds — it was a Mormosaurus!

That makes little sense, unless the reference is to welfare programs helping poor people with their fuel bills. Somehow I don’t think that’s what they’re talking about. The idea that fuel extraction is a net burden on governments, rather than a massive revenue generator, is too ridiculous to even consider. Especially if we’re talking about the whole world, i.e. including the OPEC countries, most of which subsist on that revenue!

They may have a point. Think of all the dinosaurs that would still be here had Pelosi and Biden taken the last “climate catastrophe” seriously.

Oh, but they ARE still here…roaming the halls of CONgress and terrorizing the American People.