“We are facing a lot of headwinds from Washington, as you know. The president is unpopular here in Virginia, so we have got to plow through” 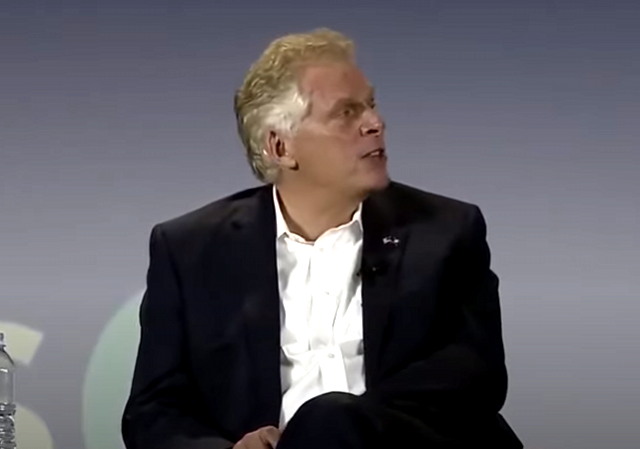 The race for Virginia governor is extremely close. Joe Biden’s horrible poll numbers are starting to have a dragging effect on Democrat candidate Terry McAuliffe.

Don’t take my word for it, though. McAuliffe is saying this himself.

Terry McAuliffe is saying the quiet part out loud.

The former Virginia governor, a Democrat who is seeking a second, nonconsecutive term, acknowledged in a video conference with supporters that President Joe Biden is unpopular in the state. McAuliffe’s off-the-cuff remarks are a candid sign about challenges the Democratic gubernatorial nominee faces as he pushes through the final weeks of his campaign.

“We’ve got to get Democrats out to vote,” McAuliffe said in the Tuesday night virtual rally with central Virginia Democrats.

“We are facing a lot of headwinds from Washington, as you know. The president is unpopular here in Virginia, so we have got to plow through,” McAuliffe said.

McAuliffe’s blunt recognition of Biden’s flagging approval ratings is also an acknowledgment of trouble for his campaign and a boost for his Republican opponent Glenn Youngkin, a first-time candidate and former co-CEO of the Carlyle Group, a private equity firm.

Republican candidate Glenn Youngkin had a few things to say about this.

On “The Story”, host Martha MacCallum noted Biden won Virginia by more than 10 points, and contrasted that with McAuliffe’s admission during a leaked videoconference with Democratic activists that “headwinds from Washington” and “Biden [being] unpopular in Virginia” could hurt his campaign if they do not get out the vote.

McAuliffe, a longtime confidant of Bill and Hillary Clinton who preceded term-limited incumbent Gov. Ralph Northam, is leading Youngkin by 4 points or less in a state that recently saw its legislature flip Democratic, and hasn’t had a Republican governor or U.S. senators in a decade.

“President Biden is unpopular because he’s failing as our president,” said Youngkin.

McAuliffe has lashed out at Youngkin, accusing him of questioning the outcome of the 2020 election. Youngkin punched back, twice as hard by tweeting this:

It’s also worth noting that Democrats in Virginia are pressuring Governor Ralph Northam to waive witness signatures for absentee ballots. Whatever could that be about?

Hey, Terry — Bernie’s free, and he’d love to come down and stump for you, if he can sleep on your couch. He’s allergic to shellfish, and drinks almond milk only. Give him a call (not collect).

As long as you agree to contract all of your media buying through Bernie’s wife’s company.

It’s funny you motioned Bernie Sanders penchant for sleeping on others couches. In the first 1/2 of Sanders adult life, he lived in a basement apartment, living off fraudulent unemployment claims, while watching endlessly (according to his friend) a movie clip on Eugene Debs giving a fiery speech in support of communism. He got involved in politics, when his landlord tried to raise his rent, thus focusing his attention on the evils of landlords daring to charge him rent. Our generation of Millennials, living in basements, soon became inspired by him. Now, this basement dweller leads our nation.

It was a total stab in the dark, generalized from the behavior of the shiftless commies I have known personally, and historically all the way back to Karl Marx who sponged off Fred Engels most of his life, including living “in his basement,” knocking up his chambermaid, and blaming it on Fred (who was such an enabling bleeding-heart cuck that he went along with it por la causa).
“‘Workers of the world, unite,’ while I take another nap.’
Note to McAuliffe: Give the maid 15 days off, to make sure her curve stays flattened.

He may be available, but he ain’t free. That’ll cost you another Dacha, Comrade.

I love the smell of Dem desperation in the morning.

How long before he starts shouting ‘Let’s Go Brandon’?

Question is…. Can the Dem vote fraud machine in Virginia manufacture enough votes to still get him selected?

Pour me another tequila, Sheila!

Make me a pancake Mandrake

Terry McAuliffe is running in a blue state as a Democrat with the nomination and isn’t up by a safe margin because he is a man of highly limited talent who is up against a highly talented Republican who is trying to make excuses incase he loses by 1%.

He very literally said parents shouldn’t have a say in their children’s education, why this race is within 4 instead of 14 is not named Joe Biden.

This is exactly it.

I’m here in Tidewater and Southeastern VA and we wish all of those damn NoVA a-holes would stop ruining our state with people like McAuliffe and Northam but they have a stranglehold. I’m at least glad to see their grip weakening a tad.

Terry was fairly moderate his first time through, but that’s only because he was stifled by a conservative legislature. This guy will turn into Biden 2.0 if he gets in this time without that check in place.

I mostly agree but should add the caveat that you forgot Richmond and VA Beach.

VA Beach is good…It’s Norfolk that’s a disaster. Richmond is a total wasteland thanks to the recent string of blues that have run through it with the governors.

The witness signature requirement was waived during the general election last year.

Also noteworthy is that McAuliffe has a campaign ad in heavy rotation in certain parts of the state that features Taylor Swift and how she was done wrong by her former management or producer or something like that and Youngkin somehow had something to do with it. That being said, Youngkin is certainly keeping up in the rate of ads department, at least where I live.

To me, since Day 1 I’ve thought whoever the GOP nominee was the odds of them winning weren’t good. I also think that what McAuliffe is doing is scaring the deep-blue areas of the state into voting, particularly places like the DC suburbs and Richmond.

lol Taylor swift’s opinion….that would definitely only fly in the North of this state.

I say throw him and the other bums out.

> And a tar and feather parting gift is well deserved.

If this election des NOTHING ELSE – it must send a message to ALL Politicians — – – – Don’t F*ck with people’s kids.

They say “CRT is not taught in public schools” BULLSHIT. You can call it anything you want – it is racial-driven instruction and it is divisive and destructive.

Sorry for typos -brain working faster than the fingers.

He’s not wrong. Elections from now to 2024 will be FJB elections.

Biden is drag on your campaign? Well part of that is true–Biden is really a drag.

But tough noogies Terry–he’s emblematic of Democrats in general.

“”McAuliffe, a longtime confidant of Bill and Hillary Clinton””

FJB. Now what could that stand for?

I love that the Dems themselves introduced a substitute that only served to give us TWO ways to say FJB. And now they have no reason to bleep it out of broadcasts. Nice.

I live in Southwest Virginia, and I feel the same way.

Hear here, friend. We still have some havens left!

Checking in from VA with a Let’s go Brandon for Joe and Terry.

Cheaters never win. Except, if they’re Democrats. They will prolong their lies for as long as the nation collapses tiredly from their stealing, their lies, and deceptions.
We mustn’t let that happen!

Democrats from Virginia are now asking Governor Ralph Northam to ignore absentee ballot witness signature requirements ahead of the gubernatorial race. And guess what’s their excuse?

I wonder when they’ll think of a better plot…

With McAuliffe fearing defeat expect a fortified election. Hopefully this time Republicans prepare a vigorous defense of election integrity and don’t let themselves be outmaneuvered by Democrats.
Suits must be filed to protect election integrity now; retain competent election law litigators (no more Krakens, please) to oppose the cheating that is to be expected.

VA is a blue state, we are behind in a large majority of the polls there, the last presidential candidate on the Republican side to win there was Bush and the last statewide victory was early in the Obama administration.

Will you please stop working as a Democrat agent trying to suppress Republican turnout with lies you know are lies just because you don’t want to accept that we lost?

I would wish for you to stop lying to help Democrats win but just in case you want to keep lying and demoralizing our side remember you are Chuck Schumer and Joe Biden’s special little agent and as they permanently transform the culture remember being Chuck Schumer’s special little agent was worth it so you could deny we lost in 2020, and pretend blue states like VA and NJ are actually red.

“It’s also worth noting that Democrats in Virginia are pressuring Governor Ralph Northam to waive witness signatures for absentee ballots. Whatever could that be about?”

The Democrats are worried that they might actually lose. They know mail-in ballots are their ace in the hole – especially because only Democrats automatically get them in Virginia (because only they asked for one last year). Republicans don’t fear COVID like Democrats do because we don’t watch their media.