“You should resign in disgrace, Judge.” 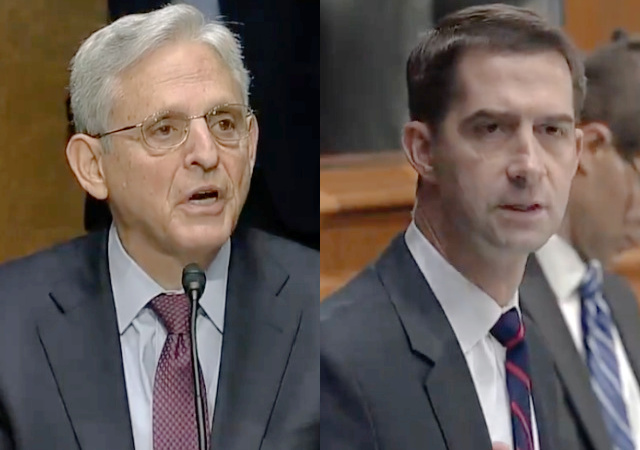 Sen. Tom Cotton (R-AR) repeated the professor’s words after a heated exchange during a hearing.

"Thank God you are not on the Supreme Court. You should resign in disgrace, Judge." pic.twitter.com/bRc8xsvt6c

Cotton reminded Garland the division is needed to chase “jihadists and Chinese spies.”

Complete exchange between @SenTomCotton and Attorney Merrick General Garland on school board memo.

Cotton concludes: "Thank God you are not on the Supreme Court. You should resign in disgrace, Judge." pic.twitter.com/PunUjPUwte

Part of the worst administration in modern history.

Galrland has proven himself to be nothing more than a corrupt apparachik, and a very dangerous one.

Remember: the left celebrates its liars, cheaters and its thugs.

Garland is.no less a thug than any Antifa or BLM street soldier.

“…the left celebrates its liars, cheaters and its thugs”

While Merrick “Judy” Garland tries to scare us with lions and tigers and bears, oh my!

You leave us out of this!

Somewhere I read that Bears are man’s best friend. Teddy Bears are a child’s favorite friend. And the Friendly Grizzly is my good friend. Get Well Soon Grizz.

Worst attorney general and that title competition include Eric Holder and Loretta Lynch.

And coming on the heels of Trump’s two swampies and Eric Holder, that’s a high bar indeed.

All sound and fury, signifying nothing.

It’s Mcarthy and Mcconnell’s GOP. What do you expect?

No kidding. Maybe Cotton should write a strongly-worded letter to the DOJ and Santa Claus.

If it wasn’t for Cotton and Ron Johnson making noise the only evidence of a GOP existence would be the occasional pools of blood Cocaine Mitch leaves in his wake. I’m thankful Garland was one of those.

Garland said the Feds are going to be at local school board meetings to prevent violence against school officials. That’s like the Black Panthers standing out in front of polling places with night clubs to prevent whites from committing violence against blacks when they come to vote.

Maybe they will have armed Federal Swat Teams standing between the
parents and school board members. They could even have Hannah Gutierrez-Reed load their guns for them.

Cotton claimed that FIB agents contacted him with their concerns about Garland’s little missive . Funny how the “good” FIB agents never do or say anything publicly that would put their pension at risk. They’ll gladly intimidate parents at a school board meeting and kneel for BLM though.

Garland is in over his activist head

I’m thankful he’s not on the Supreme Court or the childish POS would be way, way, way over his head.

Posturing seems to be big on both the left and the right now.

It used to be that the left did soap opera, and the right did amusement at what the left was saying and doing.

The trouble is that thought is what kept structures from collapsing when feelings suggested something fatal to them.

Now we’re just choosing the form of collapse for every convention.

All because of business model dynamics – you need clicks, and outrage gives the most clicks.

I suggest the right go back to amusement with the left.

Thanks for your contribution from the left…now move along. Do you think people aren’t on to you?

It won’t be long before the right moves from amusement to armament. Then you’ll be nostalgic for the amusement.

When you get near a point, make it.

The business model of this is a fascist AG has unleashed a witch hunt where the national security division of the DOJ is tasked with trying to create crimes and turn innocent people into domestic terrorists, it is unprecedented in American history.

Sorry that a senator standing against fascism outrages you.

This will all be forgotten anf Garland will continue with his sedition.

Anf Pete Butthead will be nominated for the Supreme Court.

It’s not nice to scare people this close to Halloween.

Just heard the exchange on the Clay and Buck show. Sounded good, Garland certainly needs to go, but nothing will come of it. This is just a minor blip on the radar.

I’m not a Constitutional lawyer (nor did I stay at a Holiday Inn Express last night) but off the top of my head there is nothing in the Constitution, including the 25th Amendment, that provides for the removal of the Vice-President.

But Doctor Jill’s a professional educator, not an actual surgeon or podiatrist. So what would she know about the constitution?

Hillary Clinton says she knows of numerous ways to get around the constitution to remove someone if you want to do it bad enough.

When in doubt, a comma works there, too.

Hmm, seems to work for me.

This story is grossly under reported, how does Mc Cabe retire scot free? How does the DOJ, FBI and IG blow a case of lying to the FBI, leaking infornmation plus other crimes?. Was is purposefully done to protect McCabe, was McCabe going to leak secret FBI infoif he didn’t get all his expenses and pension paid? Did the DOJ get outlawyered by McCabe?

I can’t see why Tom Cotton didn’t come out and say what he really thought of this l ying dissembling senile old slug.

Garland in full Garfinkle mode. If any chutzpah he would change name back to real name.

Garland is a LSOT! He’s either dumber than a pile of rocks or just plain evil.

He is not dumb – he went to Harvard undergrad and law school.

So it must be the other choice on your list.

Yah he went to Harvard….Harvard has been claiming for a long time they only accept and put out the best and the brightest….have seen little to No evidence of that claim…..

Cotton, Cruz and Hawley all took a pound of flesh, or more, each. Garland looked like he was going to cry at times.

Would someone please explain to me why Cotton is continually referring to Garland as “Judge”?

Because a-hole would be an insult to a useful body part.

Because Garland is entitled to be called “Judge” for the same reason someone who held rank in the military and has an honorable discharge is entitled to use their rank. Garland was a Federal Judge in good standing when he left the bench so he will forever be entitled to the honorific “Judge”.

Sort of like the way Jill Biden gets to be called Doctor? /s

Or Barack Obama gets to call himself a Nobel Peach Prize® winner?

Probably, most likely, I believe definitely, the reason Garland isn’t on the SCOTUS is because Mitch McConnell refused to let him be a justice on the SCOTUS.
Fot that, I thank him.

Senator Cotton is 100% on the mark-Garland would have been a radical, not just a liberal on SCOTUS