I wonder if these council members love the musical Hamilton. Do you think they know Hamilton’s history? They should research Hamilton’s wife and her family. 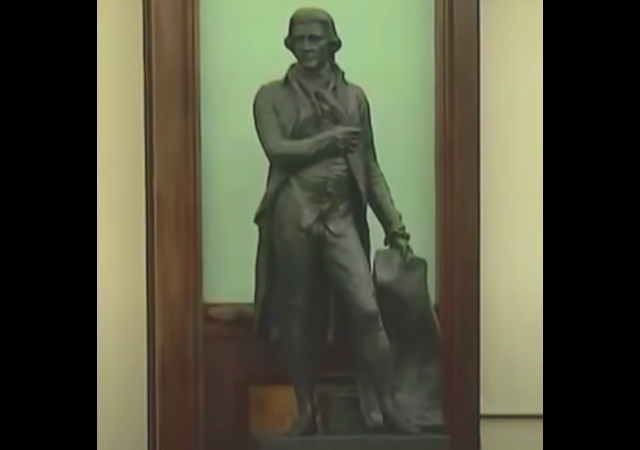 The New York City Council chamber at City Hall has housed a 7-foot-tall Thomas Jefferson statue for over 100 years.

The city officials decided they will remove the statue after decades of black and Latino council members complaining about Jefferson’s history as a slaveholder.

The members did not set a removal date or place, which upset the black and Latino lawmakers:

The unexpected delay angered some Black and Latino lawmakers, who had expected the statue to be moved from City Hall because, as the caucus said in a letter to the mayor, it serves as “a constant reminder of the injustices that have plagued communities of color since the inception of our country.”

There have been various attempts to remove the statue; two decades ago, a call to banish the statue gained attention, but went nowhere.

“Jefferson embodies some of the most shameful parts of our country’s history,” Adrienne Adams, a councilwoman from Queens and co-chair of the caucus, said at the hearing.

Assemblyman Charles Barron went all the way by suggesting someone destroy the statue or at the very least tuck it away in storage.

An agreement says the statue will land at the New-York Historical Society. The place promises “to present the statue in a historical context that captured Jefferson’s legacy as a founding father, but also as a man who enslaved more than 600 people and fathered six children with one of them, Sally Hemings.”

However, the statue might stay at City Hall. Historians suggest moving it back to the governor’s room. It stayed in that room for most of the 19th century.

America’s Founding Father will no longer have a place in the city council chambers in America’s largest city.

We all know Jefferson’s history. We read about it throughout our school years.

I bet these people are the same people who absolutely LOVE the musical Hamilton and know all the words to the songs.

I bet these people are the same people who love and celebrate Abraham Lincoln even though he wanted to ship the blocks to the Caribbean.

I am so tired reading about the endless litany of the vile Dhimmi-crats’ vindictive, infantile and Maoist antics. In this statue-removal/destruction farce that has been playing out since the Dhimmi-crat Insurrection of year 2020, they resemble the Muslim terrorists, the Taliban, perfectly. The Dhimmi-crats’ motivating ideology derives from Leftist orthodoxies, as opposed to alleged Divine mandate, but, it is just as obnoxiously totalitarian, intolerant, noxious and offensive. The Dhimmi-crats are destroying this country from within, more successfully than a foreign enemy ever could.

Roe, Roe, Roe your… past the threshold of civil viability.

It’s called the Slippery Slope. We still have a ways to go before we reach bottom.

Not that tired old walnut about Hemings AGAIN.

For the uninitiated, DNA/RNA analysis was able to determine that *a* Jefferson did father Hemings’s children, but not if it was Thomas. No, it was NOT proven. There was at least one other suspect (Thomas’s brother) who had a reputation for being a rakehell; it’s more likely he committed the deed.

Who cares? If we did DNA studies on Black
And Latino men of the same era and TODAY… including the Democrats like Clinton, Edwards, all the usual suspects… we would have millions in of out of wedlock children…

Jefferson was a product of his times and cannot and should not be judged by today;s woke standards. We should be forever grateful for his authorship of the Declaration of Independence, and his authorizing the Louisiana Purchase without even thinking that Congressional authority was required.

Let me guess they want to replace TJ with another great statesman like George Floyd?

At what point does this end? At what point will these ignorant sanctimonious assholes be satisfied? When do they finally conclude that they’ve destroyed enough to re-make the world in the way that they want it to be?

After all the statues are gone, what’s next? Skyscrapers? Houses in the suburbs they deem to be “racist”? They’ve already dipped their toe into the suburbs.

Of course the answer to the question of when, is never. In the larger perspective, by design these marxist thugs can never fully achieve their goals which means absent any real intervention, they will never quit. And more and more we see that the law does not apply to them.

The Loudon county rape coverup shows just how bad things have become. It’s getting to the point where an extrajudicial response is becoming inevitable.

Send it to Texas, we’ll be proud to set it up in out Capital!

I don’t know where this country is going, but I’m afraid it’s going to get there very soon…

I would send it to Virginia but suspect they would pass on it.

WHAT COUNTRY IS THIS ?

What’s so laughable is that the people who want to get rid of Jefferson could not hold a candle to him. Nor has anyone lived in the last 100 years that could have been his equal.

I suggest a compromise-

Erect a statue of George Jefferson. Now that would be movin’ on up to a deluxe council chamber in the sky.

Totalitarians. A war on white people, white history and the United States.

The sanctimonious mental midgets that voted to remove this statue would have to stand on their mothers’ shoulders just to kiss Jefferson’s ass.

That is both funny and true.