“And they don’t care. I’m like the only thing left to do is to just peace out.” 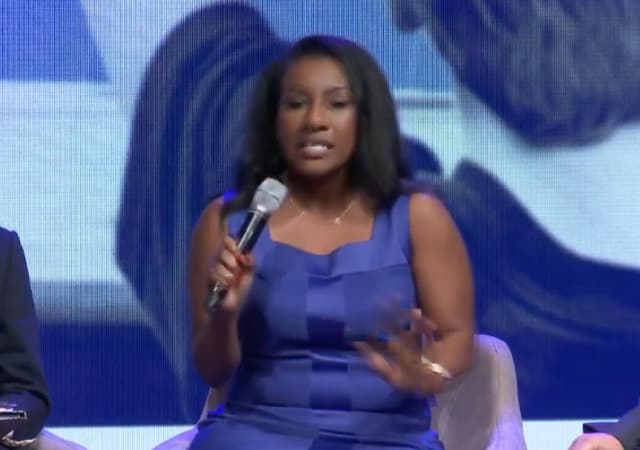 Quisha King received a standing ovation after she called for a “mass exodus” from public schools at the Family Research Council’s annual Pray Vote Stand Summit.

King’s comments were in response to AG Garland ordering the FBI and other DOJ departments to investigate those rowdy parents protesting critical race theory.

“I really think at this point the only thing to do is have a mass exodus from the public school system – that’s it,” King said. In response, she received prolonged applause, and many in the audience rose to their feet at the Leesburg, Virginia, event.

King previously drew national attention in June for her speech opposing critical race theory (CRT). She works with the group Moms for Liberty, which is one of many battling CRT and other ideas across the nation.

“With this FBI thing, it just made me realize – what else are we supposed to do?” King asked. “Standing up to these people doesn’t seem to matter. I mean, we have – all of us – we’ve been at these school board meetings, we’ve been voicing our opinions, we’re writing articles, we’re emailing teachers – we’re doing all that stuff. And they don’t care. I’m like the only thing left to do is to just peace out.”

She added that “it has to be us doing it together” in order to “really send the message that you do not have the right to indoctrinate our children.”

"Everything about it [Critical Race Theory] is anti-biblical, it is anti-American, and it is just a flat-out lie. It is just not true." @ImQuishaK #PVSS2021 pic.twitter.com/3TbruIm9Lo

Always nice to hear that there are actiist-level black people who aren’t buying the bullshit.

Bravo! She is 100% correct. The exodus has begun; may it continue and grow. Anecdotal evidence: my church supports home schoolers in a big way. And the number we support has more than doubled since the China bug came on the scene.

If a Christian church is not running or contributing to a Christian school or homeschoolers, it is failing to do its job.

Start the exodus, and then disband the school districts.

How dare they f*ck with our kids – and then be sneaky about it and try to GASLIGHT the PARENTS.

A good number of these pervs are probably fvck1ng with your kids literally.

However, CRT is intellectual sodomy upon your kids, and it’s going to make them mentally ill for life.

There has to be alternatives as charter schools are full, private schools often too expensive , maybe pod learning centers for the basics paid for by the parents but not on the scale of private tuition

Yes, everyone can do that if they are willing to do what must be done. If everyone did this, the children would not be out of school for long. And in the meantime, none of these people talk to each other? The inconvenienced parents couldn’t organize a short term solution address what to do with the children?

Everyone has to be willing to do what must be done. That has been the problem with us. Someone else always has to do all of the work so at best, the Marxists wait us out until we give up. Kind of like how McConnell stretches everything out for the Democrats while victory is knocking on our door and then delivers victory to the Dems later.

That is how we operate and we must stop. So long as we only fight when it is convenient to our schedules and doesn’t disrupt our plans, we are going to lose. We are fighting people who are willing to kill us and lots of them are willing to die for their cause. That is how wars are lost without being fought. Fighting is inconvenient and often involves unpleasantness.

It doesn’t sound like she is advocating home-schooling alone, just getting out of public schools. There are options beyond home-schooling, such as the ones you note, plus more options are undoubtedly in the pipeline.

I don’t have school-age children, but if I did, I would do whatever I had to do to ensure they were not being trained to be anti-American leftst racist “revolutionaries.” Whatever I had to do. If that meant quitting my job, downsizing, taking three jobs, moving to another area, so be it. There is no way I would allow any child of mine to be indoctrinated into this evil. There is no amount of money or personal / familial sacrifice to justify that. /my two cents. That and $6 will get you a pound of chicken OR a gallon of gas next year. Let’s go Brandon!

More states are implementing school choice where education money follows the students rather than going exclusively to the government schools. This has been made possible by the SCOTUS decision in Espinoza v. Montana a year ago (insane that it took so long to declare the bigoted Blaine amendments and legislation unconstitutional).

The next battle is to prevent the left from establishing leftist curriculum requirements for schools receiving state funding. It will be a fierce battle.

Leftists never give up.

For Garland to set this up for us as if astonishing. Is this his Tiananmen Square showdown? Is he planning to send tanks? How on earth will he ever walk away from this without looking like the dickless invertebrate that he is.

So long as we show up and defy these people en masse, we can’t lose. If all parents took their children out of public schools at the same time, this would be over tomorrow and we could begin purging these communist dictators out of our society. A sudden collapse.

Yes. Pull out ever kid and CRASH the Federal Funding that keeps schools and teacher’s unions alive.

DANGER — BE CAREFUL – DO NOT HIRE THE RADICAL TEACHERS INTO THE PRIVATE SCHOOLS. THEY WILL THEN TRY TO ORGANIZE AND BRING THE UNIONS BACK.

I’m with you, Quisha. Peace out, baby!

Phones tapped. Social media monitored. Emails and text messages intercepted and scrutinized. Browser search history studied. Cell phone location tracking logged. Helpful neighbors recruited to keep an eye on her and her visitors — “If You See Something, Say Something”.

And FGB too. Both of them.

SHE IS NOW AN ENEMY OF THE – BIDEN/GARLAND MARXIST – STATE

Would be just a peachy photo op if Garland were to try and stop Quisha in handcuffs.

CRT , which is Marxism with a pronounced anti American and anti Semitic ideological emphasis, can and should be fought at every level, whether on the web, in the courts ,at school boards or by parents deciding to home school or send to a school predicated on traditional religious and American values.

The way our system works, they’d keep the tax money and do nothing.

This is one reason I stay and cause them pain. Tax payers have a gun to their head to pay whether they teach or not.

Aren’t home schoolers required to follow certain state-mandated curriculum and have their students tested regularly? If so, won’t some states eventually just mandate parents teach their children the same garbage?

Yes. It’s just laws, rules, and regulations. They can all be changed.

It’s one thing to sneak your Marxist agenda under the radar. It’s another thing altogether to pass laws that explicitly require the implementation of a Marxist agenda. So yeah, force them further out into the open. And that reminds me, thank you Barack Obama for making the Dims drop their masks. That’s the one thing you did to help this county, you low down dirty rat-fucking Communist motherfucker.

Disobey those mandates too. We aren’t robots. Besides, it’s not the brick and mortar that offends parents but the curriculum. Just ignore those mandates as part of the same act of removing your children from the school. I am sure most parents feel that way.

Homeschool regs vary from state to state. Some states require periodic testing, others don’t. Some micromanage the curricula of homeschoolers, others grant great latitude. It all depends on the particular state.

Of course, there is always the resist/noncompliance option, like in the early days of homeschooling.

Get the hell out of there. Your children will stand no chance there.