“there are more than 2,000 migrants in the caravan, setting off from Tapachula, Mexico – some carrying American flags and signs with President Biden’s name” 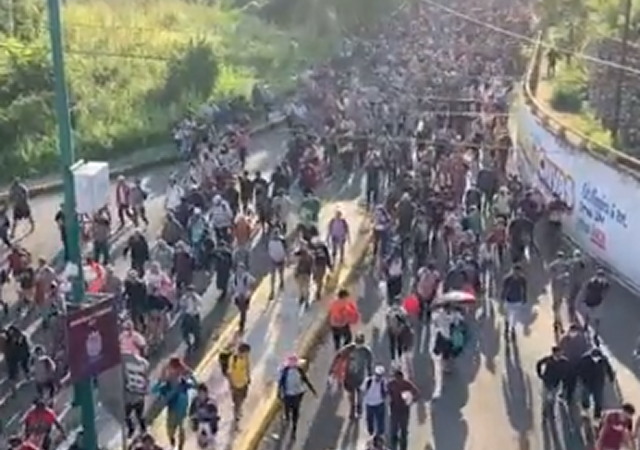 A massive new wave of migrants from various countries is now making its way through Mexico towards the southern border of the United States.

The Biden administration has sent a very clear message to the rest of the world that America’s back door is wide open, and people are responding.

Organized migrant caravan moves toward US, surging past Mexican forces

A massive and organized migrant caravan is on its way from southern Mexico toward the U.S., and has already surged past a blockade by Mexican forces attempting to stop it from getting to the U.S.-Mexico border.

Organizers tell Fox News that there are more than 2,000 migrants in the caravan, setting off from Tapachula, Mexico – some carrying American flags and signs with President Biden’s name. Tapachula is in the south of the country on the border with Guatemala.

The caravan is not merely a group of migrants congregating together, organizers made migrants who wished to participate in the caravan to register with a QR code on their phones or a web link to participate.

Within hours, the flood of migrants encountered a wall of Mexican interior police wearing protective gear and wielding shields. But the security did not hold, as migrants forced their way through the blockade and continued on their way to try and seek entry into the U.S. interior.

The numbers are staggering. It’s an all-time high.

Apprehensions of undocumented migrants crossing the southern U.S. border passed 1.7 million in fiscal year 2021 to hit an all-time high, according to Customs and Border Protection data obtained by NBC News, as U.S. officials turn their attention to a huge new caravan of migrants in southern Mexico that may head north as soon as this weekend.

The caravan gathered in Tapachula, near the Mexico-Guatemala border, includes thousands of migrants fleeing Haiti, Venezuela, Cuba and other Latin American countries, two Department of Homeland Security officials said. Violent clashes with Mexican police have broken out as desperate migrants try to leave the camp and continue their journey. New images from Telemundo, NBCUniversal’s Spanish-language network, show police meeting migrants with shields and beating them when they try to cross barriers.

The Mexican government is trying to keep the caravan from leaving Tapachula, but organizers of the group have pinned Saturday as the date to start traveling to the U.S.

Meanwhile, Joe Biden may have stopped construction of the border wall, but he is getting a protective barrier built around his beach house in Delaware.

Let’s get this straight: Biden uses federal funds to build a wall around his beach house while he refuses to build the wall at our southern border and protect American families.

Democrats know walls work. That’s why they use them for themselves. pic.twitter.com/pF7YK0Z4r5

This is beyond hypocrisy. Biden doesn’t care how it looks, and the media won’t challenge him on it.

Sending their poorest, most uneducated, and unhealthy.
It’s not going to end well.

There might accidently be one or two criminals in there as well.

Not to mention 27 year old “children”.

In fairness that would describe a large percentage of colonists and successive waves of immigrants as well. Those ‘most likely to succeed’ in their own nation have less incentive to leave.

That doesn’t mean the lack of enforcement and overall failure to address illegal immigration isn’t flawed. It’s totally unacceptable and not sustainable. The globalist hacks of corporate and agricultural interests want cheap labour, while the d/prog want to replace the culture and in some respects the composition of the Citizens.

We can’t take everyone who would rather be in the USA than their current location. We can’t afford it. Accepting some 60+ million immigrants since the 1960s as part of a largely open borders agenda is enough. A generational pause to allow cultural, educational, civic and economic assimilation to occur without additional immigration that dilutes the process is needed.

Amazing how no one digs into who is organizing these caravans. And how they never suffer any legal consequences.

Is Abbott building that wall or not? Last I heard he was going to . Going to key work but also arresting the migrants as they cross?

Arrest but probably let in

We are on track to have over 2 Million people enter illegally this year (more like 2.5 Million if you count the “got-aways”)

How can Democrat voters be okay with this ? I understand the radical progressive wing (well, I guess its not a “wing” anymore – it’s the core of the party).

First – The OPEN BORDER policy is RACIST. It disadvantages Whites, Blacks and Asians. It greatly favors Hispanics. Where are all the “anti-racists” ? No, they are fine with racism – as long as the discrimination is against people they don’t care for. By the way, Black Democrats better wake up – the Dems wan to replace you with Hispanics.

No country in the world admits so many people illegally. AND the USA already has a very generous Legal immigration policy.

I feel bad for all those people who have waited patiently – some for years – to get a Visa to legally emigrate to America. The Biden Open Border Policy makes them look like fools for actually following the law.

We look like fools by not protesting vigorously with our second Admendment rights.
We just sit and complain, call our representatives who “agree with you totally”, but do nothing
It’s all insane

They have us all paralyzed because of Jan 6

They’re carrying Biden signs now….it seems his message is getting over to the 3rd world loud and clear. Only come here if you are going to vote like I want you to vote, then we will get you in somehow. Even if you aren’t legal, we can just get you to show up at a polling place and vote in place of a dead person.

The border patrol may fire 5k agents over the vaccine mandate. They should just replace them with travel agents. SMH

We live in terrible times. Terrible.

Who are the caravan organizers?? Who is fronting the $$??
Kamalatoe ….where are you??

It is amusing to note that despite al the flak the European Union fired at President Trump for his wall-building plans the EU itself has built over 1,000 kilometres of barriers on its borders since the fall of the Berlin Wall in 1989 and is currently planning to build a great deal more…