“The company is committed to making LEGO play more inclusive and ensuring that children’s creative ambitions – both now in the future – are not limited by gender stereotypes.” 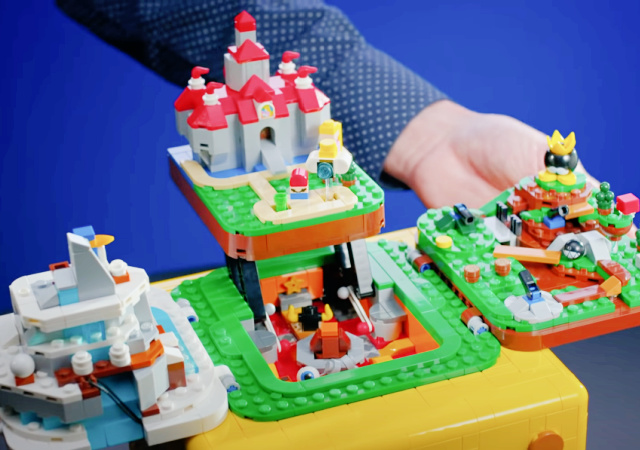 It’s about dang time! I had enough of Lego using those “harmful stereotypes” and engaging in “gender bias” for so long.

I don’t even know where to start with this because it’s so ridiculous and typical virtue signaling.

Lego is using research from the Geena Davis Institute on Gender in Media (yes, Geena Davis the actress) to justify grouping all its products into one group:

“The benefits of creative play such as building confidence, creativity and communication skills are felt by all children and yet we still experience age-old stereotypes that label activities as only being suitable for one specific gender. At the LEGO Group we know we have a role to play in putting this right, and this campaign is one of several initiatives we are putting in place to raise awareness of the issue and ensure we make LEGO play as inclusive as possible. All children should be able to reach their true creative potential,” says Julia Goldin, CMO LEGO Group.

The ‘Ready for Girls’ campaign aims to help girls rebuild the story and welcome more girls to LEGO building, ensuring they aren’t losing out on the benefits of LEGO play due to societal expectations. The company will ensure any child, regardless of gender identify, feels they can build anything they like, playing in a way that will help them develop and realize their unique talent.

The research found that a lot of boys feared people would make fun of them if they played with girl toys:

Seventy-one per cent of boys surveyed feared they would be made fun of if they played with what they described as “girls’ toys” – a fear shared by their parents. “Parents are more worried that their sons will be teased than their daughters for playing with toys associated with the other gender,” said Madeline Di Nonno, the chief executive of the Geena Davis Institute on Gender in Media, who conducted the research.

Goldin said Lego no longer labelled any of its products “for girls” or “for boys”. On Lego.com consumers cannot search for products by gender. Instead, the website offers themes that it calls “passion points”.

“We’re testing everything on boys and girls, and including more female role models,” said Goldin. The recent Lego Con showcased female designers talking about the work they did, while Lego’s Rebuild the World campaign focuses on girls.

“Our job now is to encourage boys and girls who want to play with sets that may have traditionally been seen as ‘not for them’,” Goldin added.

“The company is committed to making LEGO play more inclusive and ensuring that children’s creative ambitions – both now in the future – are not limited by gender stereotypes,” Lego concluded in its statement. “We know there is work to do which is why from 2021, we will work closely with the Geena Davis Institute on Gender in Media and UNICEF to ensure LEGO products and marketing are accessible to all and free of gender bias and harmful stereotypes.”

Look, I know it killed my mother to have a daughter reject almost everything feminine. I love boy toys. I watched boy cartoons. Instead of telling me no, my mother bought me Ghostbusters and Teenage Mutant Ninja Turtles toys. I hated dresses. I wore boy clothes. I didn’t have a close female friend until junior high. All my friends were boys.

I have no doubt other countries force gender stereotypes on children. But I’d like to think America is pretty forward on this. I’m pretty sure there are a lot of parents like my mom.

But Legos work by sticking pegs into holes. The entire concept is based on rape and male subjugation of female. Legos should be banned entirely! And every woman who has been abused by a male should sue Lego for its complicity.

Always wondered if Lego and other building toys as a young boy made me a carpenter or was it a God gift so just gravitated to toys like this.
Either way confusing very young kids will not end well, and worse parent(s) trying to change their child to the opposite sex.
Did see yesterday California if forcing store to have neutral toy sections.

If I managed a store, that’s where I would put all the toy guns, just to piss them off.

Not just males and females, but women who identify as male and men who identify as female and are forced to compensate for the inequities of Her choice (not that Choice) through anthropogenic devices, corruption, and indoctrination. Legos is constructed on a strictly, rabidly diversitist (e.g. sexist) platform.

Right. My comment was going to be, good luck removing gender bias from a product whose entire concept centers around the fact that it only works when you properly match up nubs with holes.

“But it’s also that behaviours associated with men are valued more highly in society,” said Di Nonno. “Until societies recognise that behaviours and activities typically associated with women are as valuable or important, parents and children will be tentative to embrace them.”
(Caveat: my spelling checker is shrieking that this quote is just jam-packed with back-bacon.)

But “society” sets its own values according to crowdsourced, subjective opinions of relative worth. That’s a fundamental axiom of economics. You can’t just “price-fix” society in an attempt to make it work the way YOU think it should — you’ll get arbitraged into bankruptcy.

Say, let’s ask a fundamental question here. How DO you tell a boy Lego from a girl Lego?
From the hair, eyelashes, or lipstick painted on it? By the clothes it wears?
Unclean! Unclean! Unwoke!

“…the fact that it only works when you properly match up nubs with holes.”

What do you have to know about legos before you can put them together? Well, each lego has a male side and a female side and you take the male and….

Oh, I can’t finish because I never played with legos.

Where do you think the expression, “Let go of my lego” came from?

Sex: male and female. Gender: masculine and feminine, is sex-correlated physical and mental (e.g. sexual orientation) attributes. Clothing is socially prescribed to normalize a favorable juxtaposition of the sexes. Men and women are equal in rights and complementary in Nature/nature. Trans is a state or process of divergence from normal. Homosexuals are transgender. Transvestites are trans-social. A pride parade is lions, lionesses, and their [unPlanned] cubs playing in gay revelry.

A woman and man have four choices, and a wicked solution (her Choice) executed in darkness (when she can get away with it). Roe, Roe, Roe your baby, violently down the river Styx.

In this house, we respect liberal license.

I wish Legal Insurrection had a nice “block user” feature in its comments.

Easy tiger…I believe his comment is calling out the concept you are angered by. He posts a lot of these blocks, but I can only guess that he’s saying that “jew privilege” is a dogma of the SJP/BDS/etc. hard left fanatics.

Healthguy is right. n.n. consistently points out the crazy concepts pushed by the woke.

It’s a good thing that the current generation of Millennials and Gen Z didn’t comprise the bulk of the American populace during World War II, because, the Axis Powers would have won, easily.

It’s not just social conflicts. Conflation of sex and gender, stereotypes unbecoming, are a progressive condition, and first-order forcing of anthropogenic dysfunction and confusion. Most people… persons, fathers and mothers, acknowledge that men and women, boys and girls, are equal in rights and complementary in Nature/nature, then reconcile as adults do.

I gots my metal Jarts, Jack. And my Daisy with the compass in the stock.

It never seems to occur to people anymore that “gender stereotypes”, “societal norms” and disparate treatment were basically created to protect females from males.

I guarantee you that by the end of this girls will still overwhelming play with “girl” lego and boys will want to continue to play with “boy” lego.

Just because adults will project their insecurities on to the choices made available to children doesnt mean children will necessarily choose what they wouldnt normally want to play with.

Will there be a “domestic terrorists” aisle, where Lego can stock their scale model Capitol kits?

Lincoln Logs will be next.

Wait until you see their new informercials, with John Weaver doing the Billy Mays part.

A cow may on the grass of a thousand pastures but makes it’s own milk.

Every person may be exposed to dozens of stereotypes but comes to their own conlusions, many of which change from day to day. If they weren’t subject to change their would be no commercials on tv and their would be no advertisements anywhere.

But when taking a poll or being asked how they feel in class people will anwer differently than what they really believe and therein lies the rub.