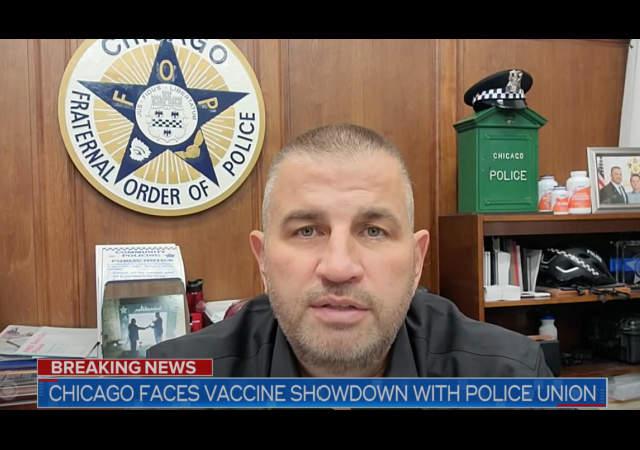 Cook County Circuit Judge Cecilia Horan ruled there was potential irreparable harm if local Fraternal Order of Police President John Catanzara persisted in making such statements. City attorneys argued they were tantamount to him advocating “sedition” and “anarchy” because he was directing members to disobey an order from their superiors.

It was the latest twist in the high-stakes standoff between Chicago Mayor Lori Lightfoot and the local police union over the city’s COVID-19 vaccine mandate. With both sides accusing the other of illegally risking the safety of the city over the issue, the fight shifted into the courts Friday with dueling lawsuits.

Lightfoot asked the courts to intervene after the union chief told members to disobey Friday’s deadline to report their vaccine status. The local Fraternal Order of Police in turn filed its own lawsuit against the city, mayor and police Superintendent David Brown that seeks to force arbitration over the matter.

The restraining order lasts until October 25 when another court session begins.

Attorney Michael Warner accused Catanzara of holding Chicago hostage and calling for an illegal strike since the FOP cannot strike due to contracts.

“As Chicago’s Mayor, I cannot and will not stand idly by while the rhetoric of conspiracy theorists threatens the health and safety of Chicago’s residents and first responders,” Lightfoot said in a statement issued Friday morning. Catanzara “has time and again deliberately misled our police officers by lying about the requirements of the policy and falsely claiming that there will be no repercussions if officers are insubordinate and refuse to follow a City and Department directive or order,” she said.

The mayor claims Catanzara is “engaging in, supporting, and encouraging a work stoppage or strike.” State law and the FOP contract both prohibit striking by Chicago police.

Chicago’s crime and violence are still major problems. The city could lose almost half of its police force due to no vaccinations.

The FOP also asked the court to tell the city it needs “to engage in arbitration over the vaccine reporting requirement” since “it’s a new condition of employment improperly imposed without collective bargaining.”

Interesting contrast between how Lightfoot interacted with the Teacher union v FOP in terms of granting more time and concessions during negotiations.

How the heck do they bypass the 1st Amdt? Free Speech anyone? Prior Restraint? They are ordering the union leader not to speak about a subject of extreme interest to the public, just, apparently, because it makes Lori Lightbrain look brain dead.

The 1st Amendment, Free Speech and all the rest don’t matter to democrats. The lower classes and other citizens subjects in this country are expected to STFU and do as they are told by their betters. After all, what in the world could possibly go wrong?

So Beetlejuice gets a tame judge to gag Catanzara and then goes out and publicly blasts the guy, calling him a liar, mutineer, conspiracy theorist, etc. Catanzara can’t respond or risks getting slapped with a contempt citation, whether his response violates the gag order or not. Typical of the Fascist Left: They ‘legally’ silence you and then commence lying about what you’re doing when you when you can’t respond.

Sure he can respond. So long as he doesn’t tell his members to disobey an order, he can say exactly what he thinks about the mayor and her false claims. And he can ask a higher court to stay the illegal order.

Many judges think they’re immune from the 1st amendment. They have so much power they don’t realize that there are limits. The order is illegal, but unfortunately the law seems to be that you have to comply with even an illegal court order until you can get it overturned. How that’s compatible with the constitution is anyone’s guess, but judges made that law so there’s nobody to overturn it. This should get an emergency appeal, though.

But that only works for democrats. All the other citizens subjects of this country just need to STFU and do as their told by their betters.

Biden did not ignore any court orders. Ignoring court orders is not safe, even when they’re blatantly invalid. You have to get them overturned first.

Well, that’s a relief because I could have sworn that Biden is still ignoring the court order to re-instate Trump’s “return to Mexico” policy. But it turns out he is not ignoring it, just disobeying it. I guess I’ll never understand the subtleties of law.

Well, it’s a good thing you didn’t swear, because it isn’t true. He is not ignoring it, and he is not disobeying it. He is reluctantly complying with it, albeit as slowly as he thinks he can get away with.

Prior restraint is limited to things like advocating for burning down a building or blowing up a bridge.

It doesn’t extend even that far. So long as it’s mere advocacy, it’s 100% protected speech. There is no dispute about that. Prior restraint is limited to things like troop movements, or to statements that have already been found defamatory.

Who knew it was even possible to find a corrupt judge in Chicago? I am shocked!!

Like the RO will make all of the cops forget everything that was said. They will all now just surrender to the dictator — right?

No, you can go to prison for that, even when the order is blatantly illegal.

And who will exercise the legal force to pick up the speaker of these seditious comments? The police?

Judges, police, court officers, and if it comes to that, national guard are all under oath to obey CONSTITUTIONAL orders. It doesn’t say “unless it comes from a judge, or your military superior, or anyone else. It is your sworn personal as sworn before God to protect and defend the constitution. The only real argument your are making is that there will be consequences.

We either have constitutional law or we don’t. We are either willing to risk suffering consequences for defending our God-given or we aren’t. The correct path is to make sure that those forcing us down that path understand that we are willing to go there and that we intend to make them suffer consequences as well.

In this case, disobey the unconstitutional court order and FORCE them to make the next step will require more oath takers to ignore their oath. It’s a downward spiral for them but liberating for us…. if we are willing to risk the consequences. Freedom/consequences. Get it?

As always with you, all roads lead to defeat and it is always because of lack of courage and imagination. Stop playing lawyer. Lawyers don’t win wars. They just clean up the mess after order has has been restored.

Creating a martyr and symbol for police officers already frustrated and angry. That will go well, I am sure.

I have no concept how a judge can make a ruling telling someone they can’t make a public or organization opinion.
What other Opinion from a Union or company leader what that person can tell their employees they can’t make.

tell the judge to FO, on the grounds that one has a moral and legal duty to refuse an illegal order.

Actually according to the law as it currently stands, one has a legal duty to obey an illegal court order. People have been punished for disobeying such orders, even while the sentencing court has acknowledge that the order was illegal. As for moral duties, they don’t matter in court.

The framers of the Constitution would say that law is invalid.

(Not that the framers’ opinions matter; what matters is what they wrote, and what the people ratified, not their private thoughts. But in this case there’s no reason to suppose they meant something other than what they wrote.)

The federal government might claim that, but the Framers would never claim that. That authority was usurped by Marbury v. Madison. The Framers disagreed vocally.

Restraining order from speaking? Oh noes! Considering Chicago is such a wealthy, well-ordered, polite city with no existential problems on their radar, there’s nothing left to do but submit to such a high prority restraining order.

If that judge is found hanging around a lamppost somewhere I won’t shed any tears.

It’s coming to that.

In a case like that, what prevents a friend or spokesperson for the union leader from speaking publicly?

Every newsletter, every memo, top of the masthead:
“As of October 15 of this year, I am forbidden by a restraining order to advise you not to comply with the city’s COVID mandate.“

Serious and probably stupid question. Who would execute the arrest warrant if he violates the RO?

The police officers, of course. That would be fun to watch.

Okay, the Union President is prevented from speaking out.

Trot out the Vice President…

Probably a lot of people who agree with the Prez.

Force our “leaders” to gag everyone in the union.

“As Chicago’s Mayor, I cannot and will not stand idly by while the rhetoric of conspiracy theorists threatens the health and safety of Chicago’s residents and first responders,”

Considering the street violence in Chicago under her “leadership,” it appears her policy is to “stand idly by” when it comes to “the health and safety of Chicago’s residents and first responders,” Lies flow so freely.

‘City attorneys argued they were tantamount to him advocating “sedition” and “anarchy” because he was directing members to disobey an order from their superiors.”

So if you tell the officer, “Gee, officer, can’t you let me off with a warning this time?” it’s now sedition and anarchy.

Every liberal cause is just a front. They claim to support blacks, hispanics, Asians, women, gays, unions etc right up until it conflicts with the far left agenda, then those groups get thrown right under the bus.

Walker v City of Birmingham is the case that says you may not disobey even an unconstitutional court order.

I take it that this is “settled” law? Everyone has to obey unconstitutional law because….???

If I were him, I would no longer say it. After all, there are plenty of recordings he could play back instead and still get the point across while technically following the nazi retard judge’s order.