“Its only place is in the dustbin of antisemitism, and that is exactly how we shall treat it.” 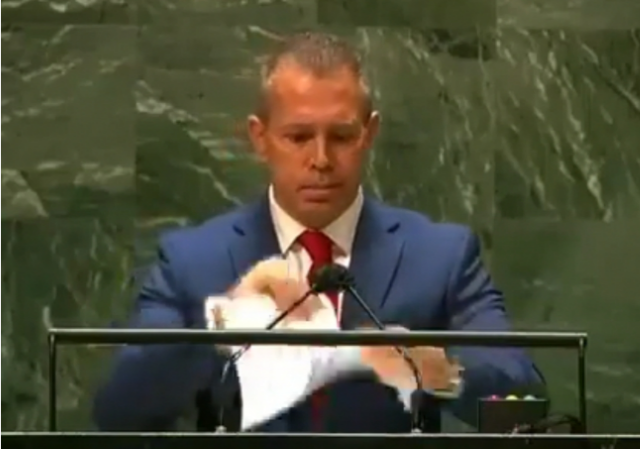 In a symbolic gesture of protest, the Israeli envoy tore up a copy of the United Nations human rights report on the podium of the General Assembly in response to the body’s obsessive anti-Israel bias.

Israel’s Ambassador to the U.S. and the UN, Gilad Erdan, slammed the UN Human Rights Council’s (UNHRC) hypocrisy for targeting Israel — the only functioning democracy in the Middle East — while ignoring gross violations of human rights across the world.

“The voices of the victims, of the terrible crimes against humanity that we have already seen in the first decades of this century, cannot be heard over the obsession of the so-called Human Rights Council with targeting Israel,” he said. The Jewish State had been targeted by the UNHRC in 95 resolutions compared to 142 against all the nations of the world combined, the envoy noted.

In an emotional address, the envoy accused the UN body of ignoring the war crimes committed by the Palestinian-Islamist terror groups against Israeli civilians.

“The Human rights Council suddenly became the Harry Potter Council, able to make all of Hamas’ war crimes and atrocities, namely the 4,300 Hamas rockets fired at Israeli civilians, magically disappear,” he said, referring to Hamas’ terror campaign of May 2021. “By whitewashing Hamas’ terror attacks and focusing so much time and energy on Israel, the suffering of the victims of humanity’s greatest crimes goes unnoticed. Shame on you, shame on you, shame on you!”

The Israeli Ambassador’s stance comes almost 45 yeas after a similar gesture by his predecessor. In 1975, the then-Israeli representative (and the father of the current Israeli President Isaac Herzog), Chaim Herzog, tore off the infamous UN resolution equating Zionism, the Jewish movement for national liberation, to racism.

In a speech to the General Assembly, the Israeli envoy slammed the UNHRC for its “obsessive anti-Israel bias” during a special session at which the council presented its annual report.

“Since the establishment of the council 15 years ago, it has decided to blame and condemn Israel not 10 times like Iran or 35 times like Syria,” Erdan said. “The Human Rights Council has attacked Israel with 95 resolutions. Compared to 142 against all other countries combined.”

“It was on this stage at this very body that the very right of the Jewish people to have a national home was itself declared to be racist. A decision that was justly overturned. A decision that Israel’s ambassador at the time, Chaim Herzog, tore up at the United Nations,” Erdan said, referring to Herzog’s November 1975 speech.

“And this is exactly what should be done to this antisemitic distorted one-sided report.” Erdan said the report’s only place was “in the dustbin of antisemitism” before apparently ripping up it up and then leaving the podium.

Today, I addressed the @UN General Assembly and spoke out against the baseless, one-sided, and outright false accusations from the Human Rights Council's annual report. 1/8 pic.twitter.com/b4YIv2jGaK

The UN Human Rights Council is stacked with communist dictatorships and failing Third-World states. The current members of the council include the world’s leading human rights violators, such as China, Cuba, Pakistan, and Venezuela. Some 60 percent of the UNHRC members were “non-democracies,” a 2020 estimate by the watchdog group UN Watch showed.

In 2018, President Donald Trump withdrew from the UNHRC. The then-U.S. envoy to the UN, Nikki Haley, described the council as a “hypocritical” body that “makes a mockery of human rights.” She also noted the UNHRC’s “disproportionate focus and unending hostility toward Israel” served as a “clear proof that the council is motivated by political bias, not by human rights.”

Ironically, the UN was a first-order forcing of catastrophic anthropogenic immigration reform, an enthusiastic advocate for planned parent/hood, an apologist for diversity, inequity, and exclusion, and a prominent party to the Green Leap.

I don’t expect the tinhorns care much.

He’s going Pelosi on them.

Sociologist Erving Goffman said that anybody who says he tore up his prepared speech to speak to you directly has torn up the wrong speech, but the modern meme is tearing up other people’s speech.

This is what you do with garbage

Palestinians are garbage, completely useless, to their children, to their fellows and useless to the rest of humanity.

The Palestinians, as indoctrinated and ripped off, and are no worse than the trash the US education and democrat media systems have turned out in our own country.

We imagine our own nation prior to the dark days of Obama, and even darker days of Biden. We can only imagine the Palestinians led by people not of low character, like our own public lowlifes of Clinton, Obama and Biden.

Btw, if anyone REALLY wants to know why Biden’s ‘presidency’ is in the toilet and circling fast, it’s because his low-rent wife Jill fancies herself as president – and is probably acting out that fantasy through Joe the puppet.

Jill is a friggin idiot, and she proved that by her appearance on the national stage when she got the chance to show us what she hasn’t.

Hey, don’t stop there. Do the UN Charter next. And the US should follow suit by Getting Out of the UN, and kicking it out of NYC. Let it take up residence back at its old League of Nations building in Geneva.

But that dream won’t ever come true if Democrats and their CFR buddies are in office.

I believe that the Rockefellers gifted the real estate on which the UN buildings sit, and they may have gifted the buildings, too, so we can’t kick the UN out of New York City, no matter how good an idea it is.

I agree with Mr. Erdan, but I think he missed an opportunity to start a world-wide response to similar dung from the UN:
” Let’s Go UN!!”

We have CNN for news and the UN for politics. They are equally reliable.

Can anyone tell me anything beneficial the UN has done in the last half century?