“It was global warming activists who tried to storm the Department of the Interior building. One officer was injured” 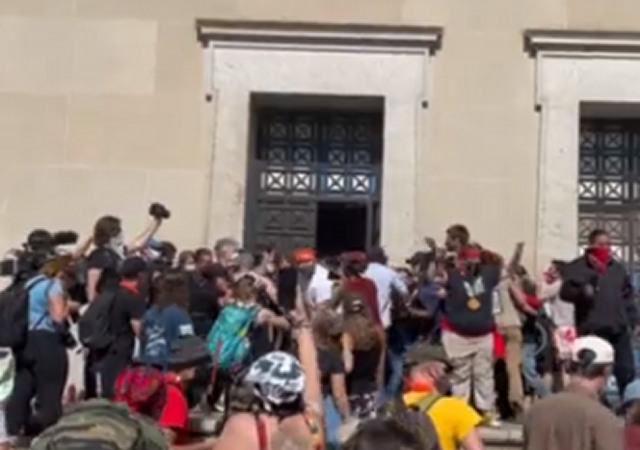 Progressive climate change protesters stormed the Department of the Interior in Washington, DC this week. Is this an attack on our democracy? Was it worse than WWII and 9/11 combined?

We’re patiently waiting for hyperventilating Democrats and media types to chime in on this outrage.

So, We’re Just Going to Ignore a Bunch of Green Warriors Who Tried to Storm the Department of the Interior?

It wasn’t the Capitol Building, but another insurrection occurred in Washington DC this week. Based on the liberal media’s rules, this was an attack on our democracy*, our principles, and it should shake us to our core. This isn’t who we are. Was this worse than 9/11? I don’t know.

That’s what the establishment media thought of the January 6 riot. Are these domestic terrorists going to be arrested as well? Will there be a congressional committee to investigate how this heinous attack on our country occurred this week? Probably not. It was left-wingers. It was global warming activists who tried to storm the Department of the Interior building. One officer was injured…

Vespa points to this report from the Washington Post:

Police and climate activists hurt in clashes at Interior Dept.

Police and climate activists clashed Thursday during protests at the Interior Department, with security personnel sustaining “multiple injuries” and one officer being taken to a hospital, agency spokeswoman Melissa Schwartz said.

Climate demonstrators were attempting to occupy the Interior Department, with dozens entering the Stewart Lee Udall Main Interior Building on C Street NW. Those who remained outside clashed with police as they tried to keep the one unlocked door open. At times, protesters attempted to push past the police line.

The protesters were here for People vs. Fossil Fuels, five days of demonstrations by a coalition of groups known as Build Back Fossil Free that has included Indigenous leaders from across the country. The coalition’s name is a nod to President Biden’s “Build Back Better” agenda…

Climate activists with the group Extinction Rebellion rallied outside the U.S. Chamber of Commerce on Thursday, with some climbing onto a ledge to release smoke flares. Others used retrofitted fire extinguishers to spray fake oil on the building.

Everything is different, when the left does it…

Hearing reports they are using tasers on Indigenous peoples outside the Bureau of Indian Affairs as Indigenous leaders occupy the building inside. Over fifty natives and allies in the building now #expectus #stopline3 pic.twitter.com/twRaka3X9L

“Go inside! Go inside!” The climate protesters make another push to break through the police barrier and join other activists inside the Department of the Interior, before the police are able to close the doors. pic.twitter.com/gNCNo562ki

“Put the tasers down!” protesters chant at police who are using tasers to clear the crowd around the doorway of the Department of the Interior. Some activists are walking away from the doorway hurt, and protesters are yelling for medics to help. pic.twitter.com/4SvT9tfuYT

We’re back to riots being the language of the unheard and democracy in action. https://t.co/g54U1OBSMa

An incomprehensible assault on our democracy. An insurrection, surely – likely an attempted coup. A worse day than 9/11. https://t.co/YtqePhFgxD

Will any of these dangerous rioters be held in solitary confinement for months?

It’s a “mostly peaceful” insurrection this time. Those are approved and even sponsored sometimes by the government.

Answer NO!
I hadn’t even heard of this

If it wasn’t for double standards, the left would have no standards at all.

The saying – “If Democrats Didn’t Have Double Standards, They’d Have No Standards at All” – comes to mind. So unfortunately, we shouldn’t be surprised.

The DOI? Who cares?

Do you blame them? Who wants the dirty, smelly, and disease ridden lower classes near them. Certainly not the members of Congress. That would be icky and not to be tolerated.

Harry “the Putz” Reid agrees with you.

No one will pay for this, the two tier justice system will take care of that.

Imagine if a white cop had shot and killed an unarmed black woman.

$50 fines and released that evening. Anybody want to bet that’s the maximum any of these people get?

“One officer was injured”

Did they perhaps hit him in the head with a fire… shovel?

Will their hearing just be combined with Bennie Thumbsdown’s other committee “hearing”? I still don’t understand how it can be a “hearing” when they don’t really want to HEAR the truth and don’t want anyone ON THE COMMITTEE who might ask serious questions. Witch Hunt 3.0