The world’s second largest economy could contract even further as the year draws to a close. 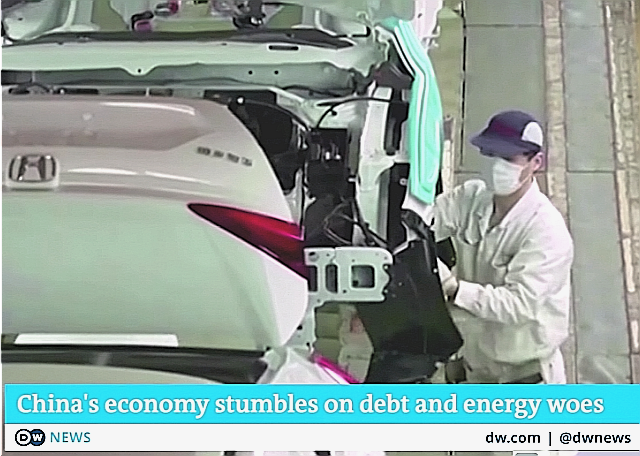 The Chinese economy is slowing down amid nationwide power cuts and a looming property crisis. “China’s housing slump and electricity shortages dragged down economic growth last quarter, with signs there will be more pain to come as the country heads into winter and property curbs remain,” Bloomberg reported on Monday.

China grew by 4.9 percent year on year between July and September, down from 7.9 percent in the previous three months.

News reports suggest that the world’s second-largest economy could contract even further as the year draws to a close. “A worse-than-expected third quarter economic performance for China has indicated there could be more pain ahead in the final three months of the year,” The Hong Kong-based South China Morning Post noted.

China’s economic growth in the third quarter slumped to its slowest pace in a year, as a property slowdown and energy shortages highlighted rising pressure on policymakers.

Gross domestic product grew 4.9 per cent year on year between July and September, according to data released by the National Bureau of Statistics on Monday, compared with 7.9 per cent in the three months ending in June.

On a quarter-on-quarter basis, growth was just 0.2 per cent.

The figures add to the pressure building on President Xi Jinping as he enters the final year of his second term and pursues an ambitious “common prosperity” strategy, an effort to tackle “excessively high incomes” and encourage wealth redistribution. (…)

Policymakers are also grappling with an energy crisis that has led to power rationing across the country, pushed factory gate inflation to its highest level since 1995 and forced the government to increase coal production despite pledges last year to reduce carbon emissions.

China has been hit by a nationwide power crisis, forcing the factories to shut down and lower production. “In late September, as many as 20 provinces have reportedly been hit by the surge in the price of coal and a shortage of electricity, with factories temporarily shuttered or working on short hours,” the Singapore daily Straits Times reported.

Disruptions in coal supply and shortages in hydro-power generation have been blamed for the country’s worst power crunch in a decade. The crisis is expected to drive global fuel prices as Beijing had told the state-run energy companies to secure fuel in the global market “at all costs,” news reports confirm.

The Communist regime is working behind the scenes to save the faltering property giant. “Beijing is prodding government-owned firms and state-backed property developers such as China Vanke Co Ltd to purchase some of embattled China Evergrande Group’s assets,” the Reuters reported late September.

But the financial troubles of China’s property giant are far from over, and the crisis could spill over to other real estate developers, news reports suggest. “The fallout in China’s property sector is showing no signs of abating, as more developers face the threat of default — even as uncertainty over the fate of heavily indebted Evergrande looms,” CNBC reported on Monday.

Much of China’s recent economic growth has come from the booming real estate sector. The housing activity accounts for nearly 30 percent of its GDP.

China wouldn’t even have an economy if it wasn’t for America buying their worthless sh!t.

I said a long time ago, after it became obvious that they loosed a bioweapon on the world, that we should simply embargo all trade with them.

Too bad our POTUS is now a grifting simpleton whose son is literally sucking the Chinese Commie tit, being paid millions while co-mingling his bank accounts with “the Big Guy.”

Yes, they would. The rest of the world buys her stuff as well. Virtually every multinational has moved their factories to China for consumer goods. It can’t be helped in many cases. Yes you can buy a cell phone made elsewhere. Vietnam, India, and I think a couple of others. But for the most part, consumer level goods come from China.

It’s like the story of the 3 bears. The papa bear eats by far the most. His plate is twice as big as mama bear’s and he eats 10 helpings of everything. The mama bear eats like a bird. And the baby bear almost nothing. Take papa bear out of the picture and whoever is selling food to the bear family is gonna lose a lot of money.

Real Estate in China is valued at 12 TIMES the entire Chinese economy.

Their subprime collapse is literally going to be at a level that has never been scene in the history of the planet.

The saying used to be, “When the U.S. gets a cold, the world gets pneumonia.”

Now, the saying should be, “When the U.S. and China get supply, energy, inflation, commodity, immigration, housing, labor, racial and crime problems, the world gets covid with intubation.”

I’m reminded of the photos of school kids (just like me) in the sixties huddling under our desks or in the hallways to avoid being incinerated by Russian Nukes. Although that won’t happen, we may all want to buy more toilet paper, ammo and freeze-dried food.

In the vernacular, “Let’s go Brandon!”

Unfortunately, a time-proven way to deflect public anger over bad economic news is to start a war…

China punished Oz for agreeing with the USA on Taiwan, and stopped all order of coal from “daown undah”; hence the power shortages. This is all the more surprising given that Shanxi and Shaanxi provinces have enormous coal reserves.

The mines are flooded.