“The waiting room was so crowded, things were so backed up they couldn’t even get her to be seen initially. So, because I knew this person, I called. I called the desk receiving nurse and asked what the situation was.” 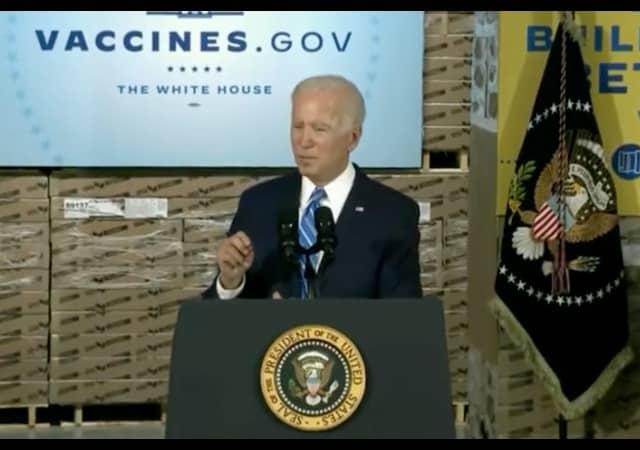 Biden bragged that he helped a friend move to the front of the line at the ER:

“Last night, I was on the telephone with a person at an emergency hospital ward in Pennsylvania because a good friend had called, and he had rushed his significant other to the emergency room because this woman was having trouble breathing, had a high fever, and could not catch her breath,” Biden said during a speech in Illinois promoting COVID-19 vaccine mandates for businesses. “They got her into the hospital. The waiting room was so crowded, things were so backed up they couldn’t even get her to be seen initially. So, because I knew this person, I called. I called the desk receiving nurse and asked what the situation was.”

“To make long story short, it took a while because all of the – not all – the vast majority of the emergency rooms and docs were occupied taking care of COVID patients,” Biden added. “I bet every one of you can name somebody who got sent to the hospital with something other than COVID and couldn’t get it taken care of.”

Biden said that he “wasn’t complaining” when he made the phone call because doctors and nurses working in overcrowded hospitals are “getting the living hell kicked out of them, sometimes physically.”

Did the President of the Unites States just admit to personally pressuring a hospital to let a friend's significant other skip ahead in the line at the ER? pic.twitter.com/CVUCq3oity

She does that mean he move them ahead of the illegals that usually take precedence in the emergency room?

I live in SoCal. What you say is no joke.

So, who was joking?

It’s bs that hospitals are overwhelmed with covid patients.

But, the emergency rooms ARE overwhelmed with illegals. Not necessarily with COVID, but that is where they get medical care.

Slow Joe is too stupid to understand why cutting line is bad.

He’s the president, and will do what he wants! Maybe he will pull an Obama and use a Marine for an umbrella holder.

I have been the doctor in an ER when a political big wig calls, guess what, nothing happens. In the presidents case, I would say that the ER staff would just start laughing.

The attempt is shame-worthy in and of itself.

We sure have a similar outlook:)

In his world – using your POWER for friends and cronies is normal. He has zero self-awareness and no care for the corrupt nature of his words and deeds.

Was it Corn Pop’s wife?

No. It was some light in the loafers staff member. Poofed Rice, Susan Rice’s nephew.

No, this person (whether real or fictional) has a female significant other.

Still could be light in the loafers. Life is strange these days.

Don’t crowd me, Milhouse! You’re just begging for a down-tick!

His ego is actually bigger than Trump’s when adjusted for ACTUAL ACCOMPLISHMENT.

We know that dotard Xi-den’s stupid enough, unabashedly corrupt and brazen enough to boast to the Dhimmi-crat media lackeys of his corruption in getting a Ukrainian prosecutor investigating his sociopath son and Biden family dealings fired, so, this latest revelation is par for the course.

First, I don’t believe this is true, ‘Brandon’ just wants us to dwell on the power he possesses.

Second, this is exactly what a power-hungry politician would do.

Joe was pulling the old “Do you know who I am?” in order to advance a self-interest.

You get the chuckle of the day award.

I thought most (all?) ERs practiced triage. Part of me says the story is just that, a story; the other part of me says such behavior is right in line with Biden’s lowlife character.

I always despised those who budged in line, or let their buddies do so.

Anyone who served in the military has seen the wife of some officer barge into the base infirmary or hospital, DEMANDING her precious Tyler’s or Britney’s knee scrape be attended to RIGHT NOW DO YOU KNOW WHO MY HUSBAND IS?!?!!??

So, such things are not unknown.

Had Trump said this last year, the media would bang the war drums non stop.

It would be cause for a third impeachment. Actually, a case with more merit than the first two. “Undue Command Influence” or at least a first cousin.

A wive’s tale from my military days (actually told to me by somebody’s wife) detailed an incident at Nurnburg Hospital where an officer’s wife tried to jump the line. When the other wife objected, she turned and snapped, “I’m Mrs Colonel Jones” (not the real name, of course). The response was, “Well, I’m Mrs Sgt Smith, and I was here first!”

So maybe flooding the country with illegals isn’t such a good idea, huh?

It’s no problem for those wo can cut the line.

The ruling class of establishment politicians – never suffer from the policies they implement.

ER was full? How can that be? I was informed that the problem of ER crowding was because people with no insurance would seek routine care. ObamaCare was touted as the solution to every malady in our health care system, you could even ‘keep your Doctor’.

Is Biden saying the signature legislative / policy item during his tenure as VP under Obama didn’t deliver?

That was until teh covids. Now the ERs are all full of unvaccinated snaggle-toothed MAGA people, all down with the cow-vid, munching horse pills while they wait and keep decent people from being seen.

I get your sarcasm and agree. My response to “horse pills” is to a)stop reading/listening and b) ask when anyone got the Nobel prize in medicine for a horse dewormer. BTW, I have administered lots of “horse paste” to actual horses. Never had one that liked it.

Your sarcasm unwittingly admits that Obamacare is not designed to handle emergencies well because it relies too heavily on preventative medicine to be successful. COVID actually outed one of the big fallacies of Obamacare when we have worst case scenarios (and COVID isn’t even worst case because of its low mortality rates).

It’s good to be king.

Did the President of the Unites States just admit to personally pressuring a hospital to let a friend’s significant other skip ahead in the line at the ER?

No, he didn’t admit that. That may well be what he actually did, but if so he didn’t admit it. All he said he did was call the hospital and inquire about the situation in their ER. He didn’t say he mentioned his friend’s name, let alone asked for her to be given any special attention. If we go strictly by what he said, then it’s possible that his call’s only effect was to send more staff to the ER and clear it more quickly, thus helping everyone waiting equally. His words are perfectly consistent with such a scenario.

But believing what Biden says is a mug’s game. It’s possible that he did in fact get his friend to the front of the line. However it’s equally possible that this whole story did not happen; that he dreamed or imagined it, that it happened on Plant Corn Pop, or that he consciously made it up because he thought it would make him look good. We have no information about this except his word, and that means nothing.

Milhouse, you make the defense case. IMO, a call from POTUS on ANY matter is a “scramble everything in sight” call.
I also agree it happened on Planet Corn Pop.
Trump was tagged with “lying” on virtually everything he said. Trump is a NYC hustler. Virtually everything he said–I am sure there are exceptions–was overstatement, exaggeration, but usually on target. I think that was part of why the Establishment/Swamp hated him so much. He exposed the man behind the curtain.
BTW, I am a southwest rural redneck, born and bred. We are born hating arrogant rich kids from NYC. Trump is no exception. I never watched a single one of his TV shows–having spent 35 years of my life as a CEO, the absolute worst thing I ever had to do was fire someone. Even as a reality show, I can’t stand the idea. I usually muted the ads for his show.
I voted for him twice and will a third time if he runs. Depending on who the feckless GOP runs, I may write him in.

I, too had doubts about “The Donald” being a good politician.
When Lindsey Graham was running him in the ground in the run-up to the 2016 election I started getting interested in Trump. After he got in office I graded him “exceeds” because he sure surprised me. Trump showed the world that
A: A politician is a fraud
B: He was not a typical politician but rather like the owner of a small business that knows how to turn a profit

Lindsey is a politician…..liberal for 4, conservative for 2.

It’s also possible that he really thinks he called a hospital. On the toy phone they keep on his arts and craft table, where the aides who spoon feed him tell him he can have tapioca for desert if he’s a good boy and eats the entire jar of Gerber creamed corn baby food along with the pureed turkey and gravy.

And they tell him he’s doing a really god job as President as he plays with his construction paper and crayons, thinking he’s signing bills into law.

I believe in Corn Pop. Seriously, I believe the story.

Election isn’t going to be determined by dumb statements from the first year of Biden’s presidency.

It wasn’t determined the first year of Trump’s presidency and won’t be determined now either.

What could be determined is retaking congress.

Taking Congress may stem the bleeding. But Congress doesn’t count the votes. Yes, Congress has the power to reject the vote count, but that implies a degree of spine never (OK, maybe rarely) observed in any elected politician. Certainly not found in the GOP.

By the way our pravda media is once again demonstrated to be fully corrupt political hacks (imagine if Trump said it).

War drums would be banging, Pelosi would be drawing up the articles of impeachment and the ??? of “The View” would be hyperventilating over this egregious abuse of power.

Instead, the media wants to fawn over him and say “See how full of love, kindness and compassion this humble servant of America is?”

They dare not, as their credibility is already stretched to the point of rupture.

Breaking their credibility is essential.

To this day, leftists blast Ronald Reagan for not pulling strings on behalf of his friend Rock Hudson when Hudson was dying of AIDS. Both Ron and Nancy didn’t feel it was appropriate to use their position for personal reasons, even to help a friend.

Back in Hudsons time, aids was already a death sentence. I’m really not much of a fan of Reagan, but I will ask this: what could he have done? Answer virtually nothing.

If Trump had done this, they would already be scheduling the impeachment vote.

Neo — … and preparing the noose.

Impeachment? This man should be on a gallows, alongside his sleazy son.

How many died while Biden’s friend got VIP service in the ER?