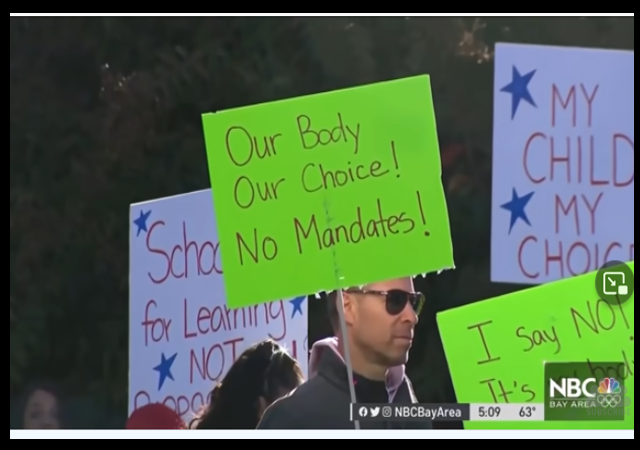 In protest against the recently imposed vaccine mandate for students, thousands of parents, students, teachers, and some school staff throughout California staged protests in events across the state.

For example, in the capital of Sacramento, over 2500 parents gathered to express their anger at the new requirement.

Video from LiveCopter 3 showed a large crowd at the Capitol mid-morning Monday. Organizers of the event say children should not be forced to get the COVID-19 vaccine to attend school, according to the event permit for 2,500 people that was approved by the California Highway Patrol.

“I’m not against anyone getting vaccinated,” student Maddox Smith said. “I’m against being forced to get vaccinated. I think it’s about power more than anything, not public health.”

Asked what would happen if her kids weren’t allowed in school for defying the mandate, parent Mariah Jones said, “Then we would have to homeschool them. How are we supposed to work and provide for our children? So it’s really not a choice.”

Parents, kids and teachers have walked out of school today to protest the states #COVID19 vaccine mandate, gathering on the west steps of the state calitol. pic.twitter.com/eg1zdziT9q

In my neck of the woods, the parents gathered at San Diego’s famous Balboa Park. The organizers were trying to keep it educational for children who participate.

“It’s really important to teach kids there are some things worth fighting for,” said Jacyln Holmes of Santee. Her two daughters go to Literacy First Charter School in El Cajon. She took them out of school for the day to attend the rally.

“America is not one size fits all, it never has been. When you say ‘This is what you need to go to school’ this doesn’t feel right,” she said.

…“There are flyers all over the state. There is not one specific group that is organizing this,” said Sharon McKeenman the founder of Let Them Breathe, a group of parents concerned about the effects of masks and vaccines for children.

Flyers posted on social media invited people to the Organ Pavilion in Balboa Park to participate in a field trip to explore educational resources and museums. McKeeman said the morning will be for parents to connect about alternative schooling options like micro-schools or homeschooling.

“If they’re calling their kids out from school for the day they want it to be a positive educational thing,” said McKeeman.

In Los Angeles, an assistant bus drive (who managed to transport people for COVID testing without a vaccination while remaining in good health) joined a rally. He is under threat of termination for not getting a vaccination.

He went from hero to zero in the Los Angeles Unified School District’s eyes.

Those prepared to sacrifice their job include Christopher Adams, an assistant transportation supervisor for school buses, who declined to be vaccinated. He said Friday was his last day at work after nearly three decades with the district. He joined the protest outside Birmingham High and hopes LAUSD will change course.

The 49-year-old said that during the pandemic, he and his team were responsible for transporting coronavirus tests for the district.

He said he does not know what’s next for him.

“We were putting our lives at risk, and for L.A. Unified to basically turn their backs on us to say, ‘We don’t care,’ is again a slap in the face,” Adams said.

1/3 of California dwarfs 100% of Wyoming in absolute numbers.

Not everyone is able to move out but realize what CA is if you would be able to.

1/3 of California voters were mental dwarfs compared to the average voter in Wyoming—until Liz Cheney was elected and the figures were reversed California’s favor.

We’ll see if Wyoming is smart enough to get rid of Cheney now that she’s proven what a traitor she is.

It will, Liz Cheney isn’t even pretending not to hate her voters.

Ya know even for people with the kind of credentials that they would be able to get the same great job in any state who also have the means to move the concept of uprooting your life and leaving everyone you know behind is a very hard one to do. Don’t call Republican Californians mentally defective for staying in California.

I never said anything about staying or leaving. My comment was about voters. The voters are the ones who are responsible for the condition California is in. I also didn’t mention democrat or republican, just voters—the voters who elected the leaders California has are mentally deficient. But compared to the voters who elected Chaney in Wyoming they look smart.

Tell these jackass fascists what.

I’ll accept a mandate when we’re allowed to sue the schools and the manufacturers for injuries and deaths from the vaccine.

“I am for socialism, disarmament, and, ultimately, for abolishing the state itself… I seek the social ownership of property, the abolition of the propertied class, and the sole control of those who produce wealth. Communism is the goal.”
https://townhall.com/columnists/mattbarber/2011/03/25/aclu-communism-is-the-goal-n1167720

Non-sterilizing (e.g. evolutionary pressure), excess adverse events including terminal viability, unknown long-term risk, symptom suppression and silent spread. A population that either has natural immunity, innate resistance, or eligible for affordable, effective, low-risk therapeutic treatments. Modern mandates are transgressive, Antiscientific, diversitist and inclusive treatments that deny the reality and science of what was, in the majority, a planned parent/hood (e.g. the bubbe “burden”) protocol that was neither a good nor exclusive choice.

Please do not forget that school-age children have approximately 0% risk of death from coronavirus.
Every year, out of the tens of millions of children in the United States, ,approximately 200 die from ordinary flu.
Even if deaths from coronavirus were triple that of flu, it would still be an insignificant number.