Meanwhile, 1000 protesters show up at a Biden event in Idaho. 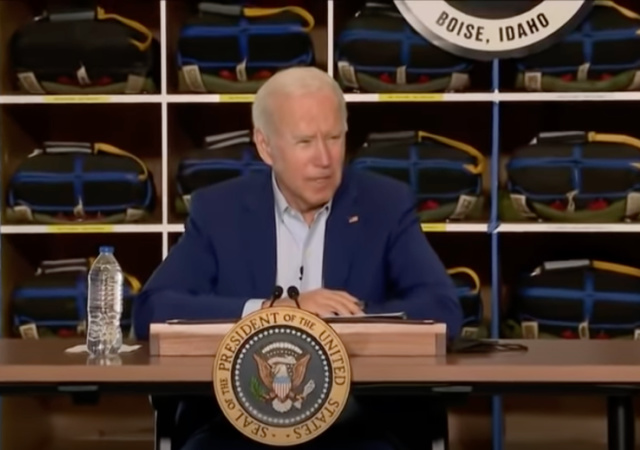 The White House officials had to interceded cut the feed of Biden’s briefing on wildfires with federal and state officials.

During Monday’s visit to Boise, Idaho, Biden received a briefing about the ongoing wildfires that have plagued several states out west.

While Biden spoke for much of the briefing, at one point he said he wanted to hear more from George Geissler of the National Association of State Foresters.

Can I ask you a question?” Biden asked.

“One of the things that I’ve been working on with some others is —” Biden said before being cut off mid-sentence.

The White House did not immediately respond to Fox News’ request for comment.

BIDEN: “Can I ask you a question?”

When he was lucid enough to talk, he pushed more climate change inanity and $15 minimum wage proposals.

The first president to officially visit the federal fire center, Biden also met briefly with first responders and an elite hot shot crew, where he reiterated calls to boost firefighter pay. The administration did recently implement bonuses for federal wildland firefighters but Biden said many still make only $15.00 an hour and put their lives on the line.

“You saved Lake Tahoe,” Biden said, referring to the massive Caldor Fire still burning out of control in California and Nevada.

Biden also used the wildfires, arguably caused by a combination of poor forest management practices and urban development, to press for his $3.5 trillion rebuilding plans.

But he was also greeted by a fair number of protesters In Idaho. Of course, I had to dig nearly all the way through an AP article to uncover this fascinating tidbit.

In deep-red Idaho, several opposing groups leveraged Biden’s visit as a way to show resistance to his administration. GOP gubernatorial candidates, an anti-vaccine organization and a far-right group were among those urging people to turn out against the president.

More than 1,000 protesters did so, gathering in Boise before Biden arrived to express displeasure with his coronavirus plan, the election and other issues.

Chris Burns, a 62-year-old from Boise, said, “I’m against everything Biden is for.” Burns was especially displeased with a sweeping new vaccine mandate for 100 million people that Biden announced last week. “He’s acting like a dictator,” Burns said.

This is what was waiting for Joe Biden in Idaho today; hundreds of Trump supporters 🙌🤣

“81 million votes” and not a single supporter of his showed up? Strange.pic.twitter.com/sZd6VUtOs6

Do we have reports of what the question ended up being?

To cheat or not to cheat. To drool or not to drool. There are so many possibilities.
.

Great question… other people were there, Whiskey Tango Foxtrot.

The asshole went off script.

The lion’s share of the firefighting on the Caldor fire was done by the CalFire people and local fire districts from around the state and the western states. The Feds turned the fire over to CalFire on the second day. Don’t confuse administration with actually doing the work.

Better forest management by both Fed and state would have greatly reduced the extent and damage of this fire. It remains to be seen if anyone learned anything this time.

It is impossible to learn when you are sure you already know everything.

They know that the problem is Climate Change

They won’t. This has been a repeated issue for YEARS now, thanks to policies that block forestry management (clearing dead brush or even setting up tightly controlled burns).

How can we find out who exactly is in charge. Someone gives instructions to the idiot who is Joe Biden.

The sinister Susan Rice is running our fovernment.

This is not a laughing matter. Clearly Biden is not the president.

Who the hell is standing back there with their hand on the audio controls who makes these kinds of decisions?

FJB indicts them all.

Remember the Trump is Putin’s stooge.

I’m legitimately asking who is controlling Biden – someone is. Is it Putin (Russian drug dealers have a laptop). Is it China controlling the Big Guy….

PS – I don’t want to ever hear anything from the left on Reagan’s dementia. Watch interviews with him at the end of his Presidency and compare with Biden now – not even close….

This episode means only one thing. It’s time to use the 25th amendment. If Biden allows his staff to cut his feed while he is talking, he isn’t capable of exercising power. Further, if his staff and allies thinks he needs to have the feed cut, they are under a moral obligation to get him out of office. This simply proves Biden’s senility and his staff and allies corruption. If the nation allows this continue, we deserve what we get.

Why is there only one public address system. Many times i have seen multiple mikes in front of speakers.

Transcript of the speech after mic cut off:

I logged on just to give you a thumbs up

They still cut him off before we hear the question. 🙂

Looks like his handlers aren’t even trying to hide their contempt for him from us anymore.

They’re not. They’re fearless. They know the GOP is in on the scam.

I think Dems are holding better forest management practices in their back pocket to implement at the right time in order to “prove” that their “climate change” tactics are working.

No, they’re not. ‘Better forest management’ involves more smaller fires. CO2 is released by fires. Small fires look bad when they turn into slightly larger fires. Fires that are *SET* by forest management agencies can cause damage weeks later, and even the smallest plant destroyed or house burned by an intentional fire becomes an eco-rallying point.

Far better in the Left’s mind to forbid any attempts to log or clear the forests, then use the inevitable giant roaring waves of fire and destruction as weapons against anybody who opposes them.

“Biden is so unstable the white house had to cut him off mid-sentence.”

Hmmm. I thought Donald Trump was the one to be concerned about.

But, on the other hand, Milley thinks Biden is a perfect picture of mental health.

WTF? What planet am I on?

Animal Planet.
The planet where all the Animal Farms are.

I have come to suspect that JB is actually an AI-programmed bobble-head doll. And like many too-smart-for-their-own-good computer programs, it (gender neutral; can’t be too careful) sometimes goes off script. Hence it is necessary to cut the audio.

A 7-second delay circuit would not work in real-time situations.

Biden is a senile old bastard. And he was no great shakes back when he had all him marbles. So, what are the options? He gets cashed out by means of the 25th amendment and we get ………….. President Harris? There is no hope.