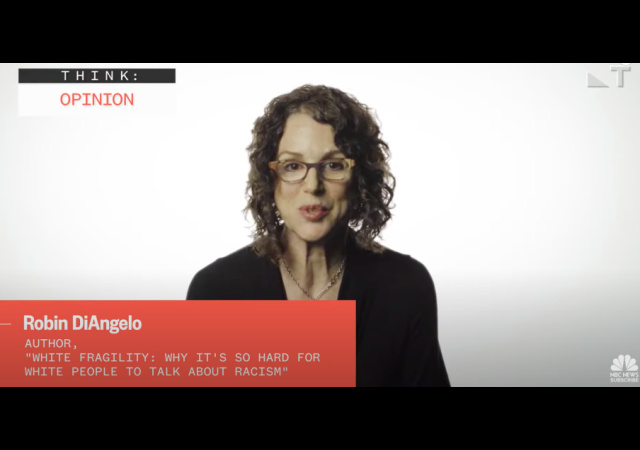 Ohio State University forked over $12,000 to CRT pusher Robin DiAngelo so she could lecture people on white privilege.

The University of Washington professor does not allow a live Q&A session or a debate. No one recorded the event.

The event was the 22nd Annual President and Provost’s Diversity Lecture & Cultural Arts Series. Diangelo was the sole speaker, according to university spokesman Benjamin Johnson, and she lectured for a little more than an hour. It was over Zoom, free, and open to the public.

The contract I obtained outlines two “primary frameworks” DiAngelo uses to craft a given keynote or workshop. Her first framework, titled “Seeing the Racial Water,” is characterized as DiAngelo’s way to “explain what makes racism so hard for White people to see, and identify common White racial patterns that prevent us from moving towards greater racial equity.”

“Weaving information, analysis, stories, images, and familiar examples, she provides the framework needed to develop white racial literacy,” the framework states. “Although the focus is on white racial identity development, people of color may also find the analysis valuable as it is one that is rarely affirmed or provided in mainstream society.”

Framework two, “White Fragility,” centers on her notion that whites “maintain control” over society and live in insulated environments that make them lack a “racial stamina.” The author says white people claim to be “misunderstood” and when racially threatened try to “reinstate white racial equilibrium and maintain control” of society.

DiAngelo’s book with the same title as framework two has been instrumental in the CRT movement in the United States, forming the basis for workshops and trainings The Federalist has uncovered before. “White Fragility” hit number 1 on the New York Times bestsellers list in June 2020 during the Black Lives Matter protests.

Robin DiAngelo Contract at … by The Federalist

It’s time for a debate, a big one. We know Professor Jacobson is willing to participate, but is there anyone on the other side willing to stand up?

Does Robin DiAngelo’s hustling count as cultural appropriation? In the fifties and sixties, white singers made a great deal of money “covering” songs originally written or performed by black musicians. Robin DiAngelo’s shtick is to make money that would otherwise go to black race hustler’s like Kendi and Coates.

The questions yet to be asked: