“The dating site ‘Ok Cupid’ has invested in a disturbing and bizarre ad campaign that focuses on sexual fetishes and rejecting lovers with conservative views. Because these ads are plastered all over subway cars in New York City, children are exposed to them on a regular basis.” 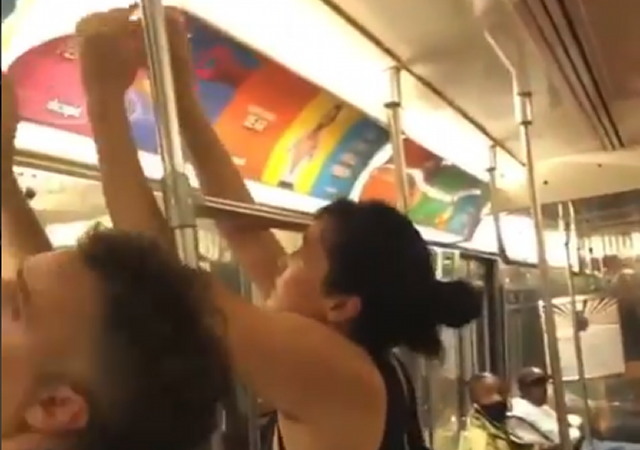 A viral video making the rounds this weekend shows a woman on a New York City subway tearing down advertisements for the dating service “OK Cupid” which she claims are forms of propaganda.

The ads feature images and slogans which are clearly meant to appeal to a woke audience.

The dating site “Ok Cupid” has invested in a disturbing and bizarre ad campaign that focuses on sexual fetishes and rejecting lovers with conservative views. Because these ads are plastered all over subway cars in New York City, children are exposed to them on a regular basis. Viral video has surfaced of a woman tearing them down and admonishing other riders for sitting there and allowing the ads to pollute the public space. Others soon join her and walk through the cars while removing the offensive posters.

“It’s gross. You want kids to be looking at this? Is that okay? This is propaganda,” the woman says while tearing the signs down. “I don’t know why no one see this.”

A small sampling of the ads shows people simulating sex acts, in sexually suggestive positions, or using words that would lead a child down a very dark internet search. One ad says, “It’s okay to have strong convictions and abandon them for the night.” The political messaging is also equally disturbing. “It’s okay to choose Mr. Right based on how far he leans left.”

Emily Jashinsky of The Federalist suggests this is a glimpse of the culture war we are currently engaged in, and that the right should remember that lots of people are not on board with the left:

Nonpartisan parents around the country are resisting the excesses of LGBT ideology and critical race theory. The issue transcends the narrow borders of identity politics. I still think the “realignment” will ultimately prove impossible, but it’s quite clear that there’s political capital to be gained by Republicans leaning into the culture war. The left pushed too far, too fast, and Democrats are now under the thumb of cultural radicals in politics and media, left to defend and promote an ideology that offends most of the country…

Democrats are out of step with the public on many high-profile questions, some of which they can’t ignore because the party establishment is culturally radicalized and demands they actively promote far-left priorities. Republicans who find that “socialism” polls poorly in the suburbs should recognize those results don’t speak to fears about the national debt. The label has a cultural connotation about creeping radicalism that can’t be tapped into with platitudes about free markets.

Some people on Twitter have suggested that this woman’s actions are no different than leftists who destroy without regard for private property. Others are suggesting that it’s time for the right to use similar tactics:

This is exactly the correct response to this kind of insane filth. No more tolerance. No more being polite. Live your convictions or bow to your new masters. Those are the only options left to us. https://t.co/OnbLq9YcZV

And now she will be hunted down and prosecuted for destroying property. BLM? Meh.

So long as it’s legal, they have to place ads regardless of content. Much like you’d want tech platforms to do instead of what they actually do.

I don’t remember a single subway ad I read as a kid.

Your poor memory is no excuse.

This woman is “punching back twice as hard” — do you remember that one?

Nothing sexual in nature should be around kids. I should never have to explain what a fetish is to my four-year-old because she saw it somewhere public and didn’t know what the word meant.

Refusal to fight back against this stuff is why the left is winning and we are losing.

Your last sentence is spot on. I regret that I have only 1 up vote to give.

A blue whale nostril can be over 1.5 feet long.

I can remember two on Los Angeles MTA buses. One was a public service ad: “Boy!”: what you will always be called if you drop out of school”. The ad went on to talk about sticking with it and get your high school diploma. They still meant something in the 1960s.

The other was an illustration, showing a car with a horse at the wheel. He is blowing the horn and shaking his right fore-hoof at what was obviously a lady horse, behind in the foreground and of shapely shape, jaywalking. The text was, “We taught a horse to drive!” Cheney Bros Driving School.

One ad racist, the other sexist, The good old days.

It’s a good thing she didn’t try to whip the ads off the wall with a horse’s reins or she would be in big trouble.

She’d be saddled with multiple charges; that’s a cinch!

One of my favorite forms of humor is word play. It’s fun, and it’s bound to offend someone.

@UserP: what about pear buns? Much better than apple fritters…

Those public obscenities are why God made portable spray paint.

I thought all big blue cities had already made carrying spray paint as illegal as London made carrying cricket bats.
First time I went to a big city Home Depot and found all the spray paint in a locked cage was a WTF moment for me.

I won’t go so far as to say”causal,” but it sure s a coincidence that places which promote unlimited tolerance turn into proverbial and literal S-holes in no time.

About 10 years ago there were a whole bunch of free newspaper boxes in Portland with the local ads for strip clubs etc. Over the course of about 3 months they simply disappeared from public places.

Out of principle, I abhor committing censorship of other viewpoints.
But when the prevailing legal system refuses to punish censorship of my viewpoints — only — while protecting others, the gloves come off.

As Mark Levin urges we all have to start standing up. She is my hero! More and more people are realizing that our government is against us.