Biden admin: We “are concerned by the affiliations and track records of some of the individuals.” 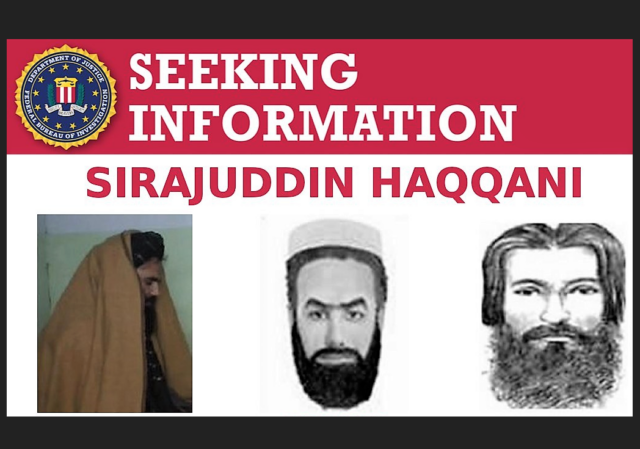 Three weeks after capturing Kabul, the Afghan capital, the Taliban announced a new government comprised solely from its ranks, appointing several members of the pre-9/11 al-Qaeda-allied regime to top positions. “The new cabinet, entirely male, is made up of senior Taliban figures, some of whom are notorious for attacks on US forces over the last two decades,” the BBC commented.

The most notable among the members of the newly-formed regime is Interior Minister Sirajuddin Haqqani. He is a terrorist on the FBI’s most-wanted list with a $10 million bounty on his head.

Sirajuddin is the leader of the Pakistan-based Haqqani Network. This al Qaeda-linked terrorist network American soldiers’ blood on its hands. “The Haqqanis are considered the most lethal and sophisticated insurgent group targeting US, Coalition, and Afghan forces in Afghanistan,” a report by the U.S. National Counterterrorism Center confirms. The outfit was responsible for the abduction and subsequent release of U.S. Army Sgt. Bowe Bergdahl.

The Associated Press reported the unveiling of the new Taliban government:

The Taliban on Tuesday announced an all-male interim government for Afghanistan stacked with veterans of their hard-line rule from the 1990s and the 20-year battle against the U.S.-led coalition, a move that seems unlikely to win the international support the new leaders desperately need to avoid an economic meltdown.

Appointed to the key post of interior minister was Sirajuddin Haqqani, who is on the FBI’s most-wanted list with a $5 million bounty on his head and is believed to still be holding at least one American hostage. He headed the feared Haqqani network that is blamed for many deadly attacks and kidnappings. (…)

Drawn mostly from Afghanistan’s dominant Pashtun ethnic group, the Cabinet’s lack of representation from other ethnic groups also seems certain to hobble its support from abroad.

New Afghan govt made up of Taliban old guard, none of the promised “inclusivity” much hailed by Western media. Many of them are hardened terrorists. The PM is sanctioned by the UN for threatening peace, stability & security. The interior minister is one of the FBI’s most wanted.

The formation of a new government made up of known al Qaeda-linked jihadis shows how little the Taliban cares about the Biden administration and its current diplomatic posturing.

The Biden White House demanded the creation of an ‘inclusive’ government as a precondition to recognizing the Taliban regime. On August 16 — just days after the fall of Kabul, Biden’s State Department Spokesman, Ned Price, backed the international call for the formation of a “new [Afghan] government that is united, inclusive, and representative – including with the full and meaningful participation of women.”

In the run-up to the U.S. troop withdrawal, the Biden State Department promoted woke values in Afghanistan. It even celebrated this year’s gay pride month by posting an image of the rainbow flag on the Kabul embassy’s social media accounts.

To the Biden administration’s horror, the new Taliban government has non-diverse jihad-embracing Mullahs, with no women or members of the LGBTQ+ community, who are now being hunted and executed by the Taliban fighters across Afghanistan.

“We note the announced list of names consists exclusively of individuals who are members of the Taliban or their close associates and no women,” the Biden State Department said in a statement. “We also are concerned by the affiliations and track records of some of the individuals.”

The European Union also appeared surprised and disappointed to see the new Islamist regime failing to reflect Afghanistan’s ‘diversity.’ The Taliban government “does not look like the inclusive and representative formation in terms of the rich ethnic and religious diversity of Afghanistan we hoped to see and that the Taliban were promising over the past weeks,” a dismayed EU spokesperson said today.

“MEET THE NEW BOSS – SAME AS THE OLD BOSS”

It took twenty years, thousands of lives and tons of money, but we were finally able to make a seamless tranistion from taliban I to taliban II.

Nation building with the Taliban, beginning with an unconditional surrender, a gift of billions of dollars worth of state-of-the-art military hardware, and negotiable human… person assets. Nice (pun intended).

The world is now set for genocide, war and terrorism on US soil.

All intentional. No negligence involved.

It’s common to hear “The USA created ISIS.” The Taliban is even more in-your-face. We put them in charge of a country, outright gave them the third largest military equipment store in the world, and freed all their supervillains so they could run the new country. Can pallets of cash and Epstein Island keycards be far behind?

This leadership of terrorists does not look good for the hundreds of American’s idiot Biden left behind! They will most likely become hostages with exorbitant demands for their release. Should the demands not be met, we face a new 9-11 disaster!

Tony Blinken says the Taliban must be more diverse if it wants international legitimacy.

I used to be against workplace drug testing. I am starting to rethink my position.

Meh. In a year or two the Taliban will be feted anyway by Western journalists and academics for its “inclusiveness”. The Joseph Goebbels media would much rather talk about the imaginary white nationalists that lurk under their beds than anything real.

Maybe expending thousands of American lives and trillions of dollars trying to turn Afghanistan into a desert version of San Francisco’s Castro District wasn’t such a swell idea.

Dad brings kid into the Post Office while Dad mails a package. Kid is mesmerized by the wanted posters on the wall. Kid asks Dad, “If the FBI wants to catch these guys so bad, why didn’t the FBI just grab them when they came in to have their pictures taken?”

Great news! Now the FBI knows exactly where he is!

They won. They appoint who they jolly well please.

A government of jihadists is only going to lead to one thing, exporting jihad

Off-topic: the Taliban have painted over a George Floyd mural in Kabul:

Who wudda thunk it? A bunch of mediocre lefty grifters who fancy themselves to be great artists just got cancelled!

For destroying the mural of St. Floyd – undoubtedly the dastardly work of the white nationalist MAGA terrorists the media see lurking under every bed – the US State Department might slightly cut the aid they planned to bestow upon the Taliban. Or not.