The four civilians will spent three days in orbit around Earth. 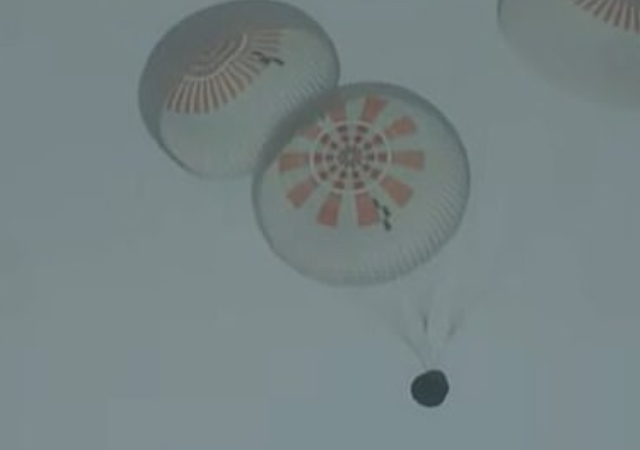 Three days ago, I covered the historic launch of SpaceX Inspiration4, which has the first all-civilian crew to ever achieve orbit around the Earth.

Now they have completed their mission after having safely splashed down in the Atlantic.

The Inspiration4 crew splashed downed in the Atlantic Ocean near Florida on Saturday night shortly after 7 pm, bringing an end to their historic three-day mission orbiting earth.

The Dragon capsule descended towards Earth on four chutes before gently landing in the water as the module floated on the surface of the Atlantic Ocean.

‘Your mission has shown the world that space is for all of us,’ SpaceX Mission Control radioed the crew.

‘Thanks so much SpaceX, it was a heck of a ride for us,’ mission commander Jared Isaacman responded.

Crew Dragon capsule Resilience touches down in the waters of the Atlantic Ocean off the coast of Florida:https://t.co/opUaZQSMZ4#SpaceX #Inspiration4 pic.twitter.com/H54c1cIk9F

This is the third time SpaceX has returned astronauts from space, and the second time for this particular Dragon capsule. This is the first splash down in the Atlantic, as prior SpaceX astronaut missions splashed down in the Gulf of Mexico.

In less than an hour after splashdown, SpaceX loaded the capsule onto its recovery ship and the crew exited, each giving waves and thumbs up after disembarking. The crew will then be helicoptered from the ship to NASA’s Kennedy Space Center, a short flight away from the splashdown site.

…The historic private mission — which includes Isaacman, pilot Sian Proctor, medical officer Hayley Arceneaux and mission specialist Chris Sembroski — orbited the Earth at an altitude as high as 590 kilometers, which is above the International Space Station and the furthest humans have traveled above the surface in years. A free-flying spaceflight, the capsule did not dock with the ISS but instead circled the Earth independently at a rate of 15 orbits per day.

There's the #Inspiration4 crew getting their first taste of natural air after spending about 71 hours in orbit pic.twitter.com/unJXs5TT1A

People across the country were thrilled that the first all-civilian mission concluded so brilliantly.

Applause was heard from the SpaceX flight control center in suburban Los Angeles as the first parachutes were seen deploying, slowing the capsule’s descent to about 15 miles per hour (24.14 kilometers per hour) before splashdown, and again as the craft hit the water.

The astronauts were cheered again as they stepped onto the deck of the recovery ship.

First out was Hayely Arceneaux, 29, a physician assistant at St. Jude Children’s Research Center in Tennessee, a childhood bone cancer survivor herself who became the youngest person ever reach Earth orbit on the Inspiration4 mission.

Some of the images captured during the orbital passes were amazing.

Look at our Mission Specialist @ChrisSembroski capturing pictures from orbit through Dragon’s cupola!

We can’t wait to see the crew’s photos and how they will inspire the world to look up to the stars. pic.twitter.com/r7jIFb50rT