Whatever he wears aboard the New Shepard, it must not include a red shirt. 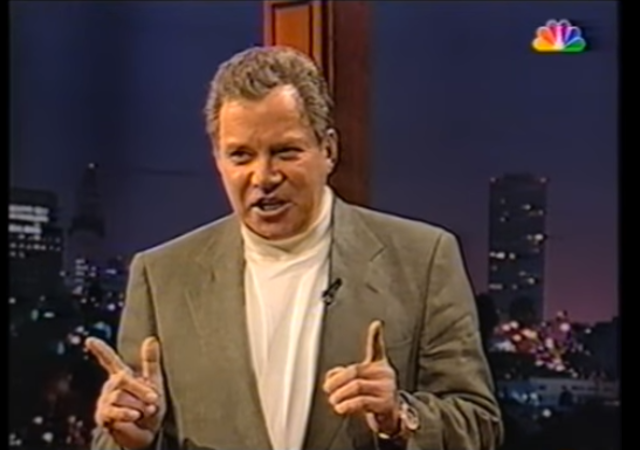 Needless to say, the safe launch, orbits, and landing of the all-civilian SpaceX Inspiration4 crew was a thrilling and important moment in space history. SpaceX founder Elon Musk has been riding high on a slew of recent successes.

Blue Origin founder Jeff Bezos clearly would like some of the attention and acclaim Musk is getting. So, his team has persuaded William Shatner (the legendary Captain James T. Kirk of the original Star Trek series) to launch into space for real in Bezos’ New Shepard rocket.

Bezos’ galaxy rider is made by his space-travel company, Blue Origin.

Shatner would be the oldest person ever to travel to space with this historic ride, TMZ reported.

The Canada native’s 15-minute flight will occur sometime in October. The outlet also reported that the mission will be filmed for an upcoming documentary featuring the actor who played Capt. James T. Kirk on the iconic series.

Shatner had several comments about the Blue Origin launch in July, which was a 15-minute suborbital flight.

‘I know there is an argument to be made about popularizing space travel, and I’ve talked to a lot of travelers to space who are excited to get to Mars,’ he told NBC.

The actor mentioned Bezos’ mission to Mars but called it ‘ridiculous.’

‘It takes a year and a half to get there. People will think it’s like we’re on a trip, on a cruise line. No, man! You’re in zero gravity and it’s hotter than hell and the air is putrid. ‘Help me, I’m dying, but I’m dying slowly!’ What a terrible fate.’

He also noted the danger of space travel.

‘If you basically have a flat tire in space, it means you die. It seems to me you’re more likely to die there than on the Hollywood Freeway.’

But Shatner ended discussing his perspective on morality [sic].

‘You know, at my age, you’re constantly aware of mortality. Any moment of, ‘Oh, I’m a little dizzy. Am I dying?’ It’s an interesting question.’

Shatner has expressed an interest in going into space several times, including at a recent Comic-Con panel.

During a panel discussion entitled “Back to the Moon and Beyond With NASA” at San Diego Comic-Con, Shatner also hinted at the possibility of going on a commercial suborbital spaceflight in the future.

“There’s a possibility that I’m going to go up for a brief moment and come back down,” Shatner said. However, he cited a history of terrible accidents like the “O-ring thing” as his main apprehension holding him back from fulfilling his astronaut aspirations. The “O-Ring” is a rocket booster seal which was found to have failed during the 1986 Challenger mission, which resulted in a fiery explosion that killed seven astronauts.

NASA astronaut Kjell Lindgren, who was also on the Comic-Con panel, assured Shatner that the agency takes safety very seriously, and has applied the lessons learned from previous mishaps to future missions.

“Our systems are much safer and much more technologically advanced than in the past,” NASA astronaut Nicole Mann added.

This will be a new version of Star Trek that I will be very happy to watch! Whatever he wears aboard the New Shepard, it must not include a red shirt.

Thread at a gaming site is asking which uniform should he wear. If they want to put him up have at it, it might kill him but he isn’t living forever anyway.

His Alpha Beta Lunar Base uniform from Airplane 2. Unless they can get him to ride outside, hanging on to the nose of the capsule, in which case he should wear his T.J. Hooker uniform.

Romulans! Don’t he a herbert Captain! They’re still out there! Call it off while you still have a chance!

Romulans? I thought it was Klingons circling Uranus?

The man is almost 90! Have they examined him to make sure he can make this real “Star Trek” episode?

What’s the worst that could happen? He’s almost 90 and has a chance to actually go into the final frontier.

Just as long as he doesn’t look out the window as he passes 20,000 feet

He could wait until they got in orbit and then have them “beam him up.”

If he didn’t look out, would anyone else have seen it?

The actor mentioned Bezos’ mission to Mars but called it ‘ridiculous.’

‘It takes a year and a half to get there. People will think it’s like we’re on a trip, on a cruise line. No, man! You’re in zero gravity and it’s hotter than hell and the air is putrid. ‘Help me, I’m dying, but I’m dying slowly!’ What a terrible fate.’

Like most of the Star Trek casts, Shatner has always understood that what he was doing is silly escapist fantasy, not real science.

At the very least, it requires a “science” that we don’t yet have in order to be feasible.
But the whole “replicator” thing was indeed fantasy.
“It can replicate everything except weapons.” Ha ha ha!
Yeah, remind me what was virtually the first thing 3-D printers were used to make.

“Yeah, remind me what was virtually the first thing 3-D printers were used to make”

I think that was the second thing 🙂

Replicators punched holes in the premises of several ST story lines. Based upon transporter technology, they are capable of assembling a variety of items from instructions on how to assemble them, and to then convert energy into matter in order to do the actual assembly. This is how the transporters work, however the pattern they use is derived from the original person or object that’s being transported. So, if you have a pattern, you can make anything. No ship or installation with transporter/replicator tech would ever be found wanting for anything. Certainly, having replicators pre-programmed for the replication of dilithium crystals and other necessaries would have priority over having them programmed to assemble cups of “tea, Earl Grey, hot.”

Speaking OF fantasy: Dr. McCoy’s first aid kit had something interesting in it. I saw a closeup picture of its contents in a book called “The Making of Star Trek”, assigned by one of my cinema professors.

The item? The accessory self-timer sold by Polaroid for their cameras. The ONLY reason I knew what it was, was I worked in the camera department at Monkey Wards and we stocked them. If 100 of them were ever sold world-wide I’d be surprised. So, the prop department probably felt it was obscure enough to pass muster.

I signed one out from work and brought it to class for a show and tell. The other students got a real kick out of it., and the teacher complimented my sharp eye.

Prop departments on low-budget productions are notorious for creatively repurposing things lying about. The medical scanner McCoy used was a salt shaker; Star Wars lightsaber hilts are camera flashguns, Star Wars blasters are leftover WWII props with greeblies pasted on. There’s a page I can no longer find that lists every recent SF movie that equipped its stormtroopers by just spray-painting a bunch of Nerf guns and calling it a day. Most Star Trek TNG ships were modelled by the designer going down to the local Toys ‘R’ Us, buying a bunch of Enterprise-D model kits in different scales and hacking them together with whatever was lying around the studio. The Borg cube was constructed out of the leftover plastic sprues.

The advent of CGI and cheap 3D printing has ended this and I think it that’s a good thing; it allows budgets to be spent on decent writing and acting instead. But I feel some of the romance of filmmaking has been lost in the process.

I had that book. Regarding props, the story I remember is that Roddenberry wanted bizarre plants to decorate a scene. A prop man came to him with an exotic plant in a pot. Gene wasn’t impressed, and took the pot from the prop man. He then pulled the plant out by the roots, and stuck it back in the pot upside-down. “There,” he said, and handed the pot back to the prop man.

If Shatner goes on this trip, he won’t have to say, anymore, “I’m not a real space captain, but I played one on TV.”

Oh, there’s an interesting idea: Make Shatner the official captain of the flight. He can authorize his second-in-command to take charge during the flight.

just as long as he doesn’t sing–his version of ” rocket man ” is painful–one of my relatives (a physician), upon hearing shatner’s version of the iconic song, observed:
“until now, had never known that music could have an emetic effect on the human body”