Why did Rolling Stone run six biased stories about Israel in May? The answer is the same as to why it ran the story about ivermectin without checking it. Anger generates clicks and revenue. 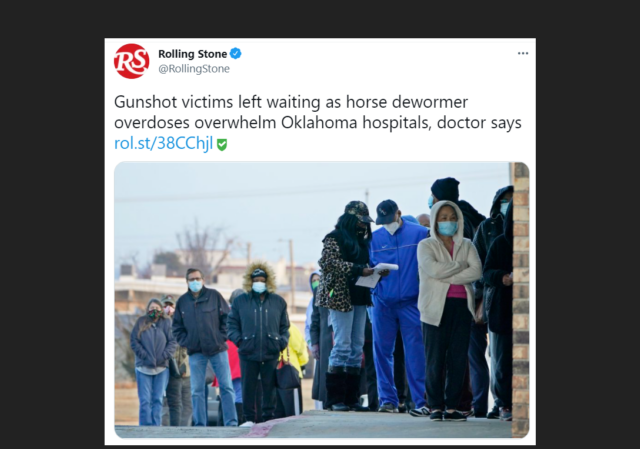 Over Labor Day weekend, the music magazine Rolling Stone found itself the subject of much criticism for an article claiming that ivermectin overdoses in Oklahoma were causing hospital overcrowding, causing other patients to be turned away. The article – originally titled, “Gunshot Victims Left Waiting as Horse Dewormer Overdoses Overwhelm Oklahoma Hospitals, Doctor Says” – was “updated” at least twice and finally re-titled “One Hospital Denies Oklahoma Doctor’s Story of Ivermectin Overdoses Causing ER Delays for Gunshot Victims.”

On the Astral Codex Ten blog, Scott Alexander has a good post trying to get to the bottom of what actually occurred or did not occur in Oklahoma, and the way that our biases inform our perception of this particular story. I don’t know what the real facts are, and I’m not a reporter. But what got Rolling Stone in hot water was the “update” – which really more accurately should have been labelled a retraction – in which editors wrote “Rolling Stone has been unable to independently verify any such cases as of the time of this update.” The “update” also stated, “Oklahoma-specific ivermectin overdose figures are not available, but the count is unlikely to be a significant factor in hospital bed availability….”

Presumably, they had also not independently verified any such cases at the earlier date of the original story. And it would appear that prior to running it they did not look into whether the number of ivermectin overdoses would be “unlikely to be a significant factor in hospital bed availability.”

So the real question is, why did they run the story?

Before answering that, let’s go back to May of this year. In the eleven days between May 17 and May 27, while Israel was fighting a war in which Hamas indiscriminately launched over 4000 rockets at Israeli civilians, Rolling Stone published no less than six articles and features biased against Israel. Those articles included, among other things, some of the same problems that corrupted the publication’s story about ivermectin, specifically, failure to fact-check and failure to seek out the other side of the story. In other words, failure to engage in journalism.

One of the problematic May articles was written by Peter Wade, the same reporter who wrote the ivermectin story. (“Bernie Sanders, AOC Introduce Resolutions to Halt U.S. Arms Sale to Israel,” May 20, 2021.) The May article quotes Senator Sanders, along with Representatives Alexandria Ocasio-Cortez and Rashida Tlaib, who had proposed legislation limiting arms sales to Israel. The reporter did not, however, appear to have sought comment from any members of Congress, Democrat or Republican, who opposed the bill.

Similarly, a May 27 article by Daniel Kreps, “Rage Against the Machine, Serj Tankian, Roger Waters Sign Letter Asking Artists to Boycott Israel,” regurgitated anti-Israel propaganda put forth by people whose expertise is in music, and including well-known antisemite Roger Waters, again without fact-checking or seeking out any opposing point of view.

Unlike the ivermectin story, according to Nexis, these articles were not corrected, or even “updated.”

Other pieces also contained erroneous claims and egregious distortions. I detailed these problems and many more in two articles on CAMERA’s site.

So why did Rolling Stone run six biased stories about Israel in May? The answer, I believe, is the same as the answer to the question above, why run the story about ivermectin without checking it?

News has become a corporatized version of the “Two Minutes Hate,” in which the goal of every broadcast is an anxiety-ridden audience provoked to the point of fury by the un-policed infamy of whatever wreckers are said to be threatening civilization this week: the unvaccinated, insurrectionists, Assadists, Greens, Bernie Bros, Jill Stein, Russians, the promoters of “white supremacy culture,” etc. Mistakes are inevitable because this brand of media business isn’t about accuracy, but rallying audiences to addictive disgust. As a result, most press people now shrug off the odd error or six, so long as they feel stories are directionally right, i.e. aimed at deserving targets.

This is a theme Taibbi developed more thoroughly in his book Hate Inc.: Why Today’s Media Makes Us Despise One Another.

In January the Guardian reported that Rolling Stone was “offering ‘thought leaders’ the chance to write for its website if they are willing to pay $2,000 to ‘shape the future of culture.’” The obvious inference is that the publication still has not recovered financially from the effects of the devasting verdict against it after its retracted reporting on the University of Virginia rape story. (The principal editor of that story, Sean Woods, who, for disclosure, was my high school classmate, also was left in charge of the publication during the interim period until its new editor in chief, Noah Shachtman, started.)

According to the ADL, there are over a billion people in the world who “harbor antisemitic attitudes.” Twenty-one million of those live in the US, almost four million in Canada, and another four million live in the UK. For all of those people, the Jews and the state of Israel can be added to the list of “wreckers [who] are said to be threatening civilization.” For clarity, these billion-plus haters compare to a mere 15 million Jews worldwide.

As Taibbi explains in Hate Inc., and as Bari Weiss also described on a recent podcast, anger generates clicks and revenue. For two weeks in May, while the war in Gaza and Israel was used as an excuse for physical attacks on Jews around the US, Rolling Stone harnessed the antisemitism of millions of people in the English-speaking world and directed its two minutes of hate against the Jewish state for clicks and cash.

A new editor in chief started on Wednesday. Hopefully his first order of business will be pulling the magazine back from this brink.

Karen Bekker is the Assistant Director of the Media Response Team at CAMERA, the Committee for Accuracy in Middle East Reporting and Analysis.

If you getting anything from ROLLING STONED you’re already in trouble.

Rolling Stone magazine is the information equivalent of Bill Di Blasio, Lori Lightfoot, Eric Garcetti, Maxine Waters, Alexandra Cortez and the like: it exists as a mere useful idiot, doing the bidding of very evil people who wish our nation harm.

Even their lists of “The Greatest_____” are wholly political.

But they’re really no different thant any other democrat/swamp media outlet that you should not allow in your home.

Serj Tankian is a certified nut case. The lead singer of System of a Down is a screaming socialist metalhead that thinks he is some kind of genius.

I wonder how many people actually read it

If one young impressionalble person reads it, it’s too many.

Does it really qualify as a reporting failure if you don’t expect truth or accuracy in their reporting from the beginning?

As I see this, the real problem is that this is now true for most media.

RS has been a Leftist Propaganda machine my entire life.
Leftist lie with these ease you breath if it pushes the narrative.

I am in my 80s, and I can honestly say I don’t know anyone who ever read that rag, or even quoted it. To me, it was just another fish wrapper/bird cage liner.

Thank you, CAMERA, for your tireless work.

Who here is old enough to remember why Rolling Stone was founded?
It was a magazine for potheads, dedicated to drug culture.
“How To Double The Potency Of Your Bag Of Stems And Seeds.”
“20 Groovy Places To Hide Your Stash.”
When did it get elevated to a Journal of American Politics?
Oh, right — when the potheads took over society.

And those potheads have made pot legal: disposing of half the population as realistically thinking people.

I’ll drink to that …

Russians have vodka that destroys half of society. We have pot and other drugs.

“News has become a corporatized version of the ‘Two Minutes Hate…’”

Then, by definition, it is not “news.” It is propaganda. Take the red pill.

Roger Waters and his Jew-hating, Israel-vilifying musician ilk are evil reprobates. This despicable oaf is a vicious Jew-hater, gullibly swallowing Muslim supremacist’/terrorists’ contrived and fallacious victimhood propaganda, demonstrating his low intelligence. But, he has a platform from which to spew his parroted venom.

My wife is from North East Oklahoma originally. She showed me a facebook thread from friends of friends who were talking about the story. In it, one person said they knew the doctor, and believed that the source of the story was two facebook posts the doctor did. That said, they grossly twisted his facebook posts and then spun it up to reach their conclusion. They were all quite amused that their local hospital is, unbeknownst to anyone in the community, a) receiving a lot of shooting victims and b) has more than two people from the trailer park who actually tried to medicate themselves by going to Orschlen’s vs. the pharmacy.