“I need not tell you the perception around the world and in parts of Afghanistan, I believe, is that things are not going well in terms of the fight against the Taliban. And there is a need, whether it is true or not, there is a need to project a different picture.” 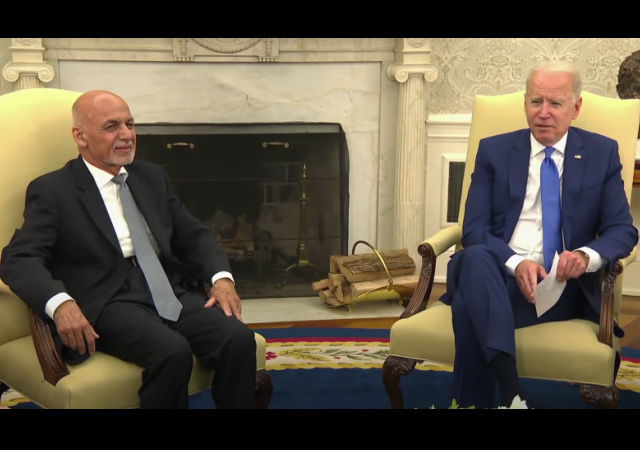 Do you guys remember the left exploding over former President Donald Trump supposedly threatening to withhold aid from Ukraine if the government did not investigate then-candidate Joe Biden’s son Hunter?

I wonder if they will say anything about a phone call between now-President Joe Biden and then-Afghan President Ashraf Ghani.

Reuters received the transcript and audio of a 14-minute phone call between Ghani and Biden on July 23.

Biden spent most of the time concentrating on “perception” of Afghanistan:

In much of the call, Biden focused on what he called the Afghan government’s “perception” problem. “I need not tell you the perception around the world and in parts of Afghanistan, I believe, is that things are not going well in terms of the fight against the Taliban,” Biden said. “And there is a need, whether it is true or not, there is a need to project a different picture.”

Biden told Ghani that if Afghanistan’s prominent political figures were to give a press conference together, backing a new military strategy, “that will change perception, and that will change an awful lot I think.”

The American leader’s words indicated he didn’t anticipate the massive insurrection and collapse to come 23 days later. “We are going to continue to fight hard, diplomatically, politically, economically, to make sure your government not only survives, but is sustained and grows,” said Biden.

So even if it is not an accurate picture, Ghani needed to project it. Um, okay.

Biden also promised Ghani aid if he “could publicly project he had a plan to control the spiraling situation in Afghanistan”:

“We will continue to provide close air support, if we know what the plan is,” Biden said. Days before the call, the U.S. carried out air strikes to support Afghan security forces, a move the Taliban said was in violation of the Doha peace agreement.

The U.S. president also advised Ghani to get buy-in from powerful Afghans for a military strategy going forward, and then to put a “warrior” in charge of the effort, a reference to Defense Minister General Bismillah Khan Mohammadi.

Despite that “spiraling situation,” Biden told Ghani he had “the best military.” He reminded Ghani he had “300,000 well-armed forces versus 70-80,000 and they’re clearly capable of fighting well.”

Ghani told Biden they “need to move with speed.” He appeared somewhat more realistic than Biden when it came to the Taliban:

Ghani told Biden he believed there could be peace if he could “rebalance the military solution.” But he added, “We need to move with speed.”

“We are facing a full-scale invasion, composed of Taliban, full Pakistani planning and logistical support, and at least 10-15,000 international terrorists, predominantly Pakistanis thrown into this,” Ghani said. Afghan government officials, and U.S. experts, have consistently pointed to Pakistani support for the Taliban as key to the group’s resurgence.

Then Ghani promised Biden the Afghani military would focus on major cities in Afghanistan. Biden approved, even though he admitted he is “not a military guy”:

Afghanistan was promising a shift in its military strategy, to start focusing on protecting “population centers” – major cities – rather than fighting to protect rural territories. Biden referred approvingly of that strategy. He said that doing so would help not just on the ground but in the “perception” internationally that was required to shore up world support for the Afghan government.

Ghani, for his part, assured Biden that “your assurance of support goes a very long way to enable us, to really mobilize us in earnest.”

The Taliban started taking over cities two weeks after the phone call. The terrorist group took over Kabul in one weekend.

Standard Uniparty M.O. Everything is a big lie preceded by gas lighting. Russia-gate, #resist, vax-masks/Wuhan flu, you name it. It’s always about a big phony narrative presented in a kabuki theater performance.

Maybe he should try projecting the picture of being awake.

The sack of shit Democrats and Pierre Delecto tried to impeach Trump over a request to investigate presumed criminal behavior WITH NO PRECONDITIONS. The Deep State military pieces of shit not only shielded but tried to promote a fatass ‘whistleblower’ that violated multiple different UCMJ statutes because he was mad Trump made a decision he didn’t like.

And even after all of this, I will still bet money that RINO sacks of shit McCarthy and McConnell will not try to impeach Biden even if they took control back of both the House and Senate.

McCarthy and McConnell will talk about re-establishing ‘norms’. It’s the neverTrump/GOPe watchword.

GOPe is worse than useless. They are enablers of the UniParty, which is dominated by Dems. The Republican base must remove them from leadership of the Republican party.

Guess who just said “President is NOT going to be removed from office!”?

The GOPe wagons are again circling to protect the Dems from us. I wonder if this will again be anchored by “special guest” puff ball interviews of McConnell, Grahamnesty, McCarthy and the rest of the RINO polymorphs on Hannity?

Meanwhile, according to Rasmussen 83% of Republicans think Biden should be impeached.

McConnell wanted to vote to impeach Trump but backed off when he realized he didn’t have the votes. Scumbag.

Of course he freaking did.

I will not vote for one single person that plans to put Bitch McConnell back in as ‘leader’ in the Senate. He has proven over, and over, and OVER again that he has no interest in advancing actual conservative causes.

He said this in the context of Democratic control of the House and the Senate. Context matters.

WH “projects a different picture” every time they open their mouth. I call it “lying.” but I’m old fashion that way.

“Then Ghani promised Biden the Afghani military would focus on major cities in Afghanistan. Biden approved, even though he admitted he is “not a military guy”:”

If he were a “military guy” He might have recognized this as one of the failed Vietnam strategies. Of course, Biden does not have any real military guys to advise him. All he has is Generals who are afraid of the phony politicians they work for.

I dissent from your take, slightly — the generals are the phony politicians, in all but name. There’s no difference, ideologically, between them and the rancid, corrupt Dhimmi-crats holding public office. Same thing with the upper echelon of our “intelligence” agencies, so-called. The ones who think it’s allegedly “inconclusive” that the Wuhan virus bioweapon was intentionally created and released by the Chinese communists.

See the despicable, narcissistic, virtue-signaling Milley, so proud of himself for showing off his mastery of the Dhimmi-crats’ “woke” lexicon, by dropping nonsensical, contrived propaganda phrases, such as “white rage,” at a Congressional hearing.

Pelosi unabashedly subscribes to the nominally “secular” Pro-Choice selective, opportunistic, politically congruent religion, not limited tot the wicked solution. Biden, too. Time will tell if his Choice will progress as Obama 2.0 a.k.a. Iraq 2.0 or the transnational war… anthropogenic conflict without borders.

The entire episode is surreal. What kind of transparent dope talks to a foreign leader under siege and duress, in desperate need of aid, like this?
“If you do, A, B, and C, and, stand on one foot, then maybe, just maybe, I’ll help you out.” Vile Xi-den was washing his hands of the matter, plain and simple.

And, it goes without saying, what country or leader would count on the U.S. to have its back, in desperate times, as long as Xi-den and his puppetmasters/cabal is running things? No one.

What kind of transparent dope talks to a foreign leader under siege and duress, in desperate need of aid, like this?

Sociopaths have no problem at all doing things like this.

The irony is surreal.

Epitaph for Ghani’s government: Here lies another bloody fool who trusted the USA.

Well at least he made out like a bandit and is living comfortably in the US with American taxpayer dollars.