The Jews and rabbis made AOC change her Iron Dome vote to present and supposedly made her cry on the House floor. 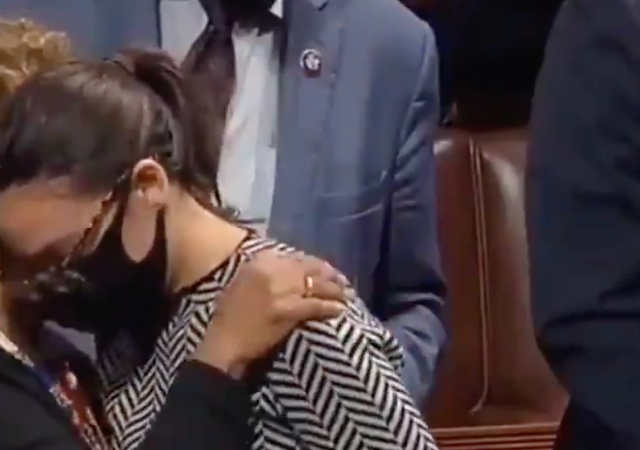 Rep. Alexandria Ocasio-Cortez (D-NY) appeared to cry on the House floor after the House passed funding for Israel’s Iron Dome.

AOC also changed her vote to “present.” Her office did not explain why she changed it.

I didn’t write about it because the video shows she’s upset, but it’s hard to tell if she’s actually crying.

But The New York Times piece on the vote sounded more like an editorial as writer Catie Edmondson inserted commentary that one can interpret as anti-Semitic.

What are we doing here, NYT? pic.twitter.com/5OKtF5IYPn

The Jews and Rabbis made AOC change her vote to present.

“The tableau underscored how wrenching the vote was for even outspoken progressives, who have been caught between their principles and the still powerful pro-Israel voices in their party.”

The NYT edited out the part Edmondson should have never put in the article.

Did the NYT even acknowledge the correction? No. It only noted the final total correction in the article.

Either Edmondson is ignorant to AOC’s views on Israel or..does Edmondson have something she wants to admit? She could have even left it at “influential lobbyists” because we all know they exist. But why on earth would she include rabbis?

Who on this planet would think rabbis and Jews could persuade AOC to do anything, especially something good for Israel?

Caught between their principles and their…rabbis? Are the rabbis being mean to the Squad? Did AOC switch her vote because she was afraid she'd get in trouble and miss Shabbos Party? She was supposed to be the ima this week! pic.twitter.com/5KfAiQyyH9

.@nytimes frames the #IronDome vote as pitting "principles"—-the honorable goal of Israeli civilians getting murdered by Hamas—and the raw naked power of the evil Jew Lobby. Including rabbis! It's that bad!https://t.co/8IPj5rTw4X pic.twitter.com/gYjb6lXR7E

The Pravda Times is so vile. Note the propaganda reference to the allegedly nefarious “pro-Israel lobby.” A logical and obvious question is why the “pro-Israel lobby” is allegedly more nefarious than the unabashedly pro-Muslim terrorist/supremacist lobby (e.g., CAIR and a plethora of Dhimmi-crat lobbying groups, adjunct advocacy groups and think tanks) that perennially whitewashes, rationalizes, excuses and otherwise enables Muslim terrorists’ violence, supremacism, totalitarianism, misogyny and belligerence against non-Muslims?

Recall that the Pravda Times pulled a viciously brazen, Jew-hating stunt, back when narcissist-incompetent-dunce, Obama, was in office, marketing his farcical capitulation/give-away to Iran (laughably termed a “deal”). The Dhimmi-crat media lackeys all dutifully and furiously toiled, 24/7, to carry water for Obama’s propaganda talking points regarding his cruddy capitulation, vilifying American Jews, Israeli Jews and others for possessing the temerity to express totally legitimate concerns and pose legitimate questions regarding the Iranian regime’s oft-expressed desire to commit genocide against Israeli Jews, by wiping the country “off the map.” The despicable Pravda Times printed a column listing sundry New York Congressional Representatives, with a column denoting whether the rep opposed or supported the Iran capitulation, and, another column denoting whether the rep was Jewish. You can’t make this stuff up.

It’s principled now to be against a purely self-defense system?

Chick cries easy, don’t she?
Maybe she could use some anti-depressants.
Oh, but then she might go all spree-shooter on the rest of the House.
(Jack Benny voice): “I’m thinking it over!”

Maybe the US should stop funding the Palestinian terrorists and there would be less need for the Iron Dome. Reduce aid to both Palestine and Israel. Heck, reduce foreign aid to every country. Teach them to stand on their own two feet.

From what I have heard of Israel, they don’t need to be taught. They need to decide to unleash. Personally, I have often wondered if the World at Large shouldn’t just embargo and isolate the whole of the Middle East and tell them to have at it and let us know when there is The Last One Standing. Israel would either cease to exist or would come out on top.

I feel the same way about places like Afghanistan. We will never be able to stop amputations, genital mutilation, or public executions.

The best we can do is repeal Hart-Celler and return to the times of immigrants that are Western in culture, and have either skills or education in fields that will benefit our nation. We did fine with that before 1965, we can again.

Nobody ever repeals anything. One of the top ten rules of modern politics.
One of the smartest recent examples of statesmanship was when the opposition forced a sunset clause into the “Assault Weapons” “Ban.” Otherwise, we’d never have been rid of that, either. And notice that it was so obviously-to-everyone ineffective at anything except gun-owner harassment that nobody has seriously tried to re-pass it since.
Not unlike craploads of other modern legislation… but they weren’t smart enough to jam sunset clauses into those, so we will have to endure them forever.

If they reported the truth the first time it wouldn’t have to be edited. You don’t have to edit the truth.

AOC is not crying on the house floor

Why the hell are you giving that twit any publicity

Yet Jewish voters will still vote overwhelmingly for a political party that hates them. This is a nothing issue.

It follows along with the disproportionate percentage of Jews favoring disarming the populace.

The Jooozzz! It’s always the Jooozzz! What a frigging load of codswallop. If I were a journalist working for the NYT, I’d tell my mother I played the piano in a whorehouse. That’s a more respectable job.

As for AOC crying on the floor of the House–the little vixen carries a bottle of onion juice so she can cry on command. The lady is ugly clear to the bone–although I’ll admit the facade is kinda cute.

If you’re into horses.

Kinda hard to tell the front from the back.

Just look at the emanations and penumbras. You will soon tell.

Of course, she’s upset! More Jews will live because we helped protect them and, as is typically the case with anti-Semites, she’s against that!

She thinks we’re violating the Palestinians’ and Arabs’ right to murder Jews.

Ah, the basis for a new sequel to “Species”.

Cosplay for a potential Senate run, about as genuine as her visit to a parking lot fence. The d/progressive are not hiding their disdain for Jewish voters. It’s in the open and the message is clear; you are not valued and they must break into fake histrionics when they tolerate your existence in their party. It wasn’t as if AOC voted for funding, she altered her previously cast no to present and faked tears from the ‘pain’.

AOC is a lousy actress. Even if she were a good actress, it would be disgusting to see her crying just because Iron Dome will prevent Hamas from killing more children.

I’d say she’s full of sh-t, but sh-t would’t even bother with her (unless it was a tax cheat).