Meanwhile, as he gets booster shot, Biden indicates that a “vast majority” of Americans must be vaccinated before we return back to a normal life. 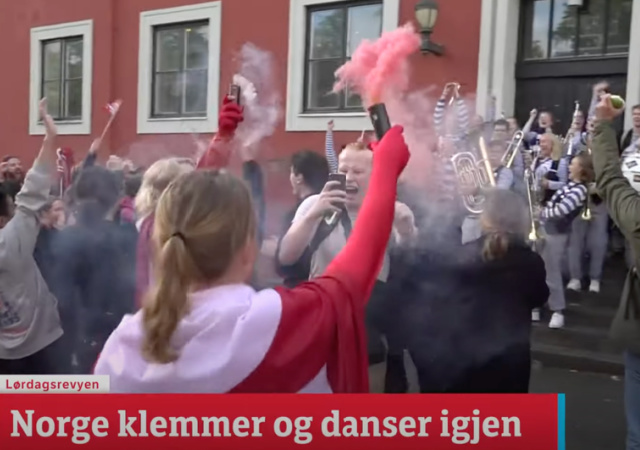 Norway is the latest country to accent the endemic status of COVID-19 and return to everyday living and working patterns. The Norwegians are celebrating like Vikings who have just concluded a spectacularly successful raid.

Norway has lifted all lockdown restrictions with less than 24 hours notice, sparking rowdy celebrations, with mass brawls and revellers passing out in nightclub queues after 561 days of restrictions came to an end.

The Norwegian government abruptly announced on Friday it was going to lift the remaining social distancing requirements on Saturday at 4pm, meaning that nightclubs could open and restaurants and bars could fill to capacity.

‘It has been 561 days since we introduced the toughest measures in Norway in peacetime,’ Prime Minister Erna Solberg told a news conference. ‘Now the time has come to return to a normal daily life.’

The PM’s unexpected unlocking kicked off boozy celebrations the following afternoon which lasted late into Saturday night, with an impromptu rave in Stavanger, a mass brawl in Tønsberg and no less than 50 fights reported to police in Oslo.

As a bonus, there are no vaccine passports either.

Police said unrest was reported in several places, including in the southern city of Bergen and the central city of Trondheim, but the situation was the worst in Oslo.

Long lines were seen outside Oslo’s nightclubs, bars and restaurants late Saturday and police registered at least 50 fights and disturbances during the night. Neither vaccination status certificates nor negative test results are required to enter such venues in Norway.

Of course, the Centers for Disease Control and Prevention (CDC) was not impressed with this approach.

The Centers for Disease Control and Prevention urged Americans to “avoid travel” to Norway and Bulgaria on Monday, citing a “very high level of COVID-19,” but most Americans aren’t allowed to visit Norway anyway.

On Saturday, Norway opened its borders to citizens from the European Union, the European Economic Area and a handful of other countries on its purple list – currently New Zealand, Saudi Arabia, Singapore and Taiwan – as well as residents of the United Kingdom and Switzerland. These travelers will not have to quarantine or undergo testing if they have been fully vaccinated or can prove that they had been infected and recovered from the coronavirus within the past six months.

Unfortunately, while getting his booster shot, Biden indicates that a “vast majority” of Americans will have to be vaccinated before we return to a normal life.

Wow. This could wake up a lot of people. Biden was asked how many people need to be vaccinated for us to go back to normal and he said 97%-98%. It’s out in the open now. We’re NEVER going back to normal with Joe in office. What science says we need 97% for herd immunity? pic.twitter.com/dTfAkSxUFQ

I think…look…I think we get the vast majority like what is going on in some industries and some schools…something like 97 to 98 percent. I think we’re getting awful close. But I’m not a scientist. One thing for certain, a quarter of the country cannot go unvaccinated.

Clearly, he is not a scientist. Perhaps he should call Norway and borrow some.

Covid 19 lockdowns will last as long as most temporary taxes.

I was looking for the inevitable cross-cultural chart, documenting (I would bet) that Norway did not flatten their curve any more than anyone else did.

No herd immunity is possible with non-sterilizing vaccines or while providing selection pressure (any type of vaccination) that results in variants capable of evading vaccine-induced immunity. Mass vaccination was a mistake of the first magnitude, and the results were predicted a year ago by experts who warned it was dangerous to attempt to vaccinate our way out of a pandemic.

I met a man with herd immunity and asked him how it impacted his life. He said, “I used to be bothered by herds, even small ones would make me break out and I would have trouble breathing. But now I’m able to be around really big herds, even mingle with them, without it bothering me in the least.”

Sounds like he has herd denial. The herd is definitely going to be bothering him.

I find this joke extra funny, because truth beats fiction. As a kid, my wife was allergic (hives) to almost all animals. As a teen, she had a cat. Late 20s, we had adopted a dog and she remained allergic only to horses. In middle age, we bought a ranch with horses and burros. She lost her allergy to all but one, and then only when grooming him below the knees, or getting slobbered on. Now that’s some herd immunity. And she sailed through COVID asymptomatically, as did our oldest.

Thanks henry. That made my day.

Clearly, he is not a scientist, but clearly he has a honorary #&$$*))ass degree from the University of Science, with emphasis on syllogistic logarithms.

The Norse haven’t celebrated that much since the raid on the north coast of England in 895.

Unfortunately, the town sources those smoke bombs wholesale from the Wuhan Institute of Hilarity.

What was gained by this totalitarian lockdown?

It gave them a reason to celebrate when it was lifted.