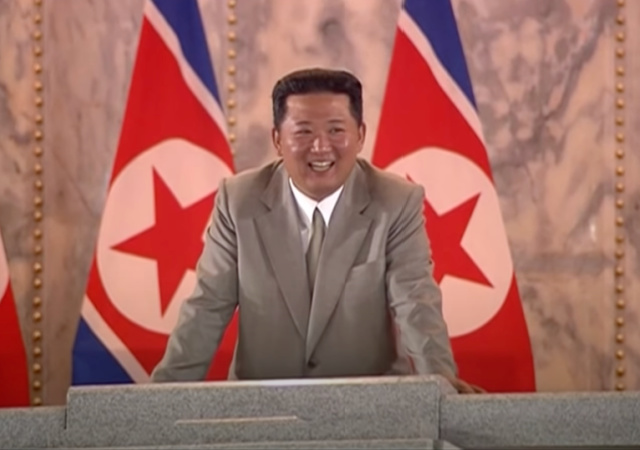 Rocket Man is at it again!

It is the first time North Korea has tested anything in months.

The development of the long-range cruise missile, a strategic weapon of great significance in meeting the key target of the five-year plan for the development of the defence science and the weapon system set forth at the 8th Congress of the Party, has been pushed forward according to the scientific and reliable weapon system development process for the past two years and, in this course, detailed tests of missile parts, scores of engine ground thrust tests, various flight tests, control and guidance tests, warhead power tests, etc. were conducted with success.

The development of this weapon system that has been powerfully pushed forward as a crucial work under the special concern of the Party Central Committee holds strategic significance of possessing another effective deterrence means for more reliably guaranteeing the security of our state and strongly containing the military maneuvers of the hostile forces against the DPRK.

The test flights were successfully held.

The launched long-range cruise missiles traveled for 7 580 seconds along an oval and pattern-8 flight orbits in the air above the territorial land and waters of the DPRK and hit targets 1 500 km away.

The test launches showed that the technical indices such as the thrust power of the newly developed turbine-blast engine, the missiles’ navigation control and the end guided hit accuracy by the combined guided mode met the requirements of designs.

In all, the efficiency and practicality of the weapon system operation was confirmed to be excellent.

Talks between the U.S. and North Korea collapsed in 2019 after a summit between former President Donald Trump and dictator Kim.

Kim has rejected invitations for talks with Biden. He wants D.C. to end all of its “hostile” policies.

The South Korean military has not confirmed any activity. The Yonhap News Agency in Seoul reported the missile test.

Dr. Jeffrey Lewis from Middlebury Institute has a fascinating Twitter thread about this.

North Korea tested a 1500 km-range cruise missile, which is capable of delivering a nuclear or conventional warhead against targets throughout South Korea and Japan. A short thread. https://t.co/2BivABm3mR

At the time, Kim's remark caused a lot of us to reassess some launchers we saw at the October 2020 and January 2021 parades. The system tested looks a bit different from the one in the parade. One difference of several: The system tested today had five canisters instead of four. pic.twitter.com/9cwfcjM9TR

Kim Yo Jong was direct. She described the US-ROK exercises as having an "aggressive nature as they are a war rehearsal and preliminary nuclear war exercise" said and that they would "counter the US on the principle of power for power …"https://t.co/QmTPOLlegm

A an intermediate-range land-attack cruise missile is a pretty serious capability for North Korea. This is another system that is designed to fly under missile defense radars or around them.

For some reason, it's always very hard to get people to take cruise missile proliferation seriously. Well, here we are! Maybe this will do it? Dennis Gormley passed away recently, but if he were with us he'd say "I told you so."https://t.co/UHQkTstVmd

Thanks again Dictator Dementia. Every nut job on the planet wants to take a shot now.

It is easier to believe Kim than it is to believe Biden, Fauci, Harris, CNN et al, any Democrat, RINOs, …

Kim is not ar war with is.

The othera are. And they mean business.

I dunno. If this site supported surveys, I’d post one asking, “Who has more credibility with you — Kim Jong Un or Joe Biden?” But I’m not sure what the results would even mean.

Okay, show us. Hit Wuhan with one as proof, otherwise you fail.

Which CNN broadcaster are you referencing?

Wow it’s almost like they think a demented idiotic pussy is in charge of the US and that the generals are cowards.

I had a conversation with someone (and this is someone you’ve possibly heard of) who is a close personal friend of former and current generals and other high rankers about what is going on right now- and why they aren’t pushing back harder (at least from our viewpoint). The starting point of the conversation is why more aren’t quitting like the one marine. The conversation went on to what the other generals are doing/not doing.

I can’t articulate the full picture, but a significant portion of it can be described as follows: ANY idiot in the oval office can be advised to avoid the mistakes Joe has made. But not Joe Biden.

“ANY idiot in the oval office can be advised to avoid the mistakes Joe has made. But not Joe Biden.”

I hear what your acquaintance is saying, but at the end of the day the generals saluted, said “Yes, sir!” and perpetuated the screw up.

I seem to remember seniors in PDT’s government who flat out refused to do what President Trump ordered them to do. Hmmm. Why is that not happening now?

The science is settled: the 2020 election was a coup.

A Junta runs our country – no different than any other flavor of organized crime.

The junta is supported by a controlled media.

The important point here is that they are testing a Cruise Missile. Not a ICBM.

Speculation was that the ICBM they were testing before was built upon a limited number of engines that they had salvaged from a Ukrainian bone yard. Emphasis on cruise missiles suggests that was correct. And, that they have few ICBM missiles left (if any).

Talk, talk, talk. Show us some action, RocketMan! Take out Biden’s Delaware compound and knock out the White House, both in the same hour.