The Minnesota Freedom Fund was supposed to bail out protesters and rioters after George Floyd’s death. Now they bail out anyone, including alleged domestic abusers. 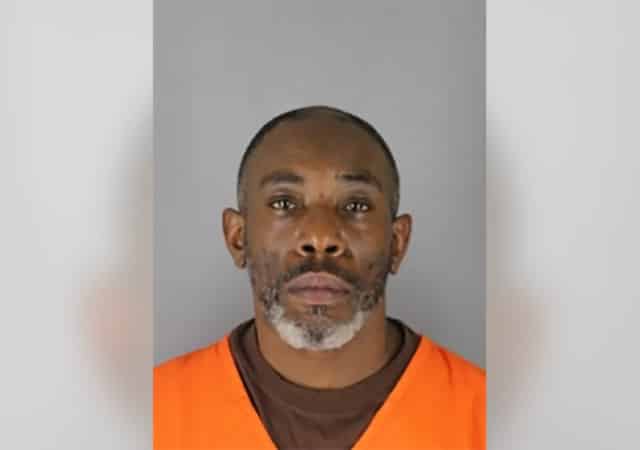 Do you guys remember the Minnesota Freedom Fund (MFF) group formed after George Floyd’s death? It was supposed to bail out those who protested and rioted in Minneapolis after he died.

Controversy has surrounded the group since its formation. It bails out people without any consideration to anyone. It even bailed out an alleged domestic abuser.

Then-Sen. Kamala Harris loved to hype up the group.

Now MFF is in trouble again. An alleged domestic abuser it bailed out is now charged with second-degree murder.

Surveillance video reportedly showed Ortiz, in a blue BMW, and Howard, in a white Volvo, “get into a road rage incident” on the ramp entering the interstate.

Ortiz could be seen getting out of his vehicle and approaching Howard’s vehicle. Ortiz then collapsed and Howard could be seen driving away. Ortiz got back into his vehicle, drove down the ramp and subsequently crashed, surveillance video showed.

Investigators spoke with that passenger who drove the Volvo away from the gas station. The passenger told investigators Ortiz allegedly punched Howard before Howard allegedly fired a shot and left the scene.

When investigators interviewed him, Howard admitted to getting into a road rage incident with Ortiz but initially claimed nothing happened. When investigators prompted Howard with the surveillance video, Howard claimed there was yet another passenger in the Volvo who shot Ortiz from the back seat. Investigators reported Howard was unable to provide identifying information about this additional passenger.

Lovely. I understand why the group exists. But maybe choose other people to bail out?

MNFF responded to Howard’s arrest but deleted the tweets. However, the internet is forever. 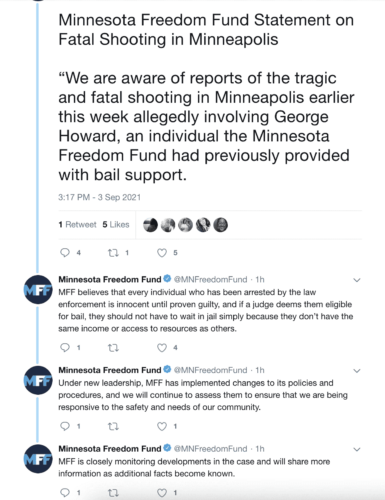 MFF’s new leadership wants to change its policies. It received $35 million following Floyd’s death. But once you donate you cannot tell them how to apply your money.

On August 9, FOX9 reported the group used the money to bail out people like Howard instead of those protesting and rioting in Floyd’s name.

It bailed out “a suspect who shot at police, a woman accused of killing a friend, and a twice convicted sex offender.”

Greg Lewin, the interim executive director of the fund, said the group is all about the system, not the crime. He admitted he doesn’t “even look at a charge” when he bails out a person.

Lewin bragged about how a clerk told him, “We hate it when you bail out these sex offenders.”

Innocent before proven guilty. I get it. I like it. It’s how it should be in a civilized society.

But when person after person you bail out commits another crime, usually more heinous than the one they previously committed, maybe you should rethink things.

IMO they faced an influx of cash contributions which they lacked the organizational structure to manage. Everyone who was anyone in d/progressive circles was shoveling contributions to them to burnish their woke credentials and bow to the virtue signaling mob.

“It was supposed to bail out those who protested and rioted in Minneapolis after he died.”

We do not know that was its real purpose. I suggest it is to release criminals so crime increases. I do not believe marketing literature from leftists or carnivals. Look at the patterns and the actual behavior and you will see consistency. Never listen to the words of a leftist unless you want to be a mark in a con game. Leftists always lie.

These politicians always want the cop to lose their qualified immunity. I think it’s time we took it from politicians so when they screw up they don’t get a pass either.

So it’s time these groups were pursuing as accomplices to these killings. Start making them personally liable for each and every death that’s resulted from their actions.

Do what? Why would you think providing bail makes one an accessory? A better idea would be doing the difficult work of electing members of the State Legislature who will bring bail laws into line with reality.

Then continuing the hard work of keeping them in office. Then electing a Gov who will sign the legislation. Then working to elect or appoint Judges who exercise common sense and not a leftist ideology where everyone accused of a crime is a victim of society.

If Willie Horton had a son, he’d look just like this dirtbag.

Well that would be an improvement over Obama’s son.

Do try to confuse me with facts.

Kamala Harris is a clueless, desperate hack. She’s capable of anything stupid and malicious.

Without her bitch act or cackles – or the value of her sexual services – she is a vaccuous fool.

Even with those things she is a vaccuous fool.

Technically speaking, she is vacuu-ous (sp.)

In her case, appearances aren’t deceiving.

Is it wrong to hope some of these fine upstanding citizens abscond so the fund loses the money?

The beauty of the mechanism is that it doesn’t matter. Rich wokesters donate to the fund, and consider their donations a sunk cost. They don’t expect to get a return, or a refund, or even to have their principal conserved. The perps can abscond without losing a penny, provided they can outrun the bounty hunters (and you know they all think they can). The fund would like to have their money back to spend on another perp, of course, but if they don’t, well, they just tap more rich wokesters. Win/win/win. The losers are us.

Showing the perp’s picture. How racist can you get?!?

This guy is the black face of white consequentialism (thank you Hollywood).