If schools can’t make your kids pray to Jesus, then they can’t make them pray to the Aztec gods of human sacrifice in the name of dismantling oppressive white supremacy, either. That’s the claim being put forth in the Californians for Equal Rights Foundation new lawsuit against the California Board of Education. 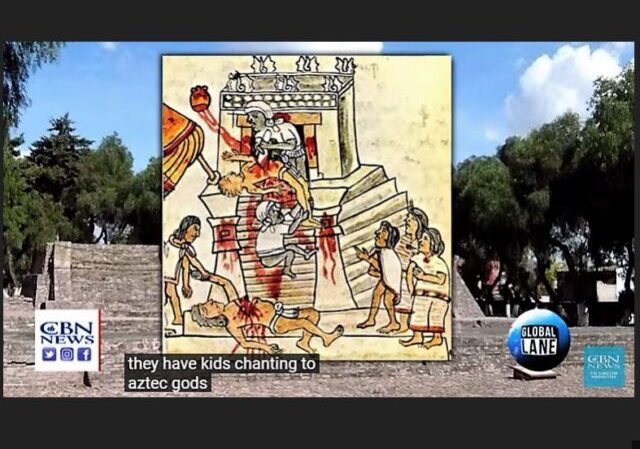 If schools can’t make your kids pray to Jesus, then they can’t make them pray to the Aztec gods of human sacrifice in the name of dismantling oppressive white supremacy, either.

That’s the claim being put forth in the Californians for Equal Rights Foundation new lawsuit against the California Board of Education. Spearheaded by Wenyuan Wu, who led the successful ballot measure against Proposition 16 (racial preferences) in California last year, alongside the Thomas More Society, the lawsuit argues that California’s newly passed Ethnic Studies Model Curriculum (ESMC) violates the Establishment Clause of both the California and United States Constitutions that ban government aid of religion.

The ESMC has been highly controversial, even among liberals and moderates sympathetic to minority uplift, for several years. Other authors and myself have written extensively on the topic elsewhere, but the gist is as follows: various racially-based groups and activists have been lobbying for years to make Ethnic Studies a high school graduation requirement in the state of California. Union del Barrio, a self-described “Marxist revolutionary” group, is one of them, having worked with the original authors of the ESMC to draft a curriculum they believe will abolish the American political system, capitalism, borders, and Whiteness, and replace them with an indigenous socialist utopia they call “Nuestra America.

After the California Legislature passed a bill requiring the CDE to create an Ethnic Studies Model Curriculum, Union del Barrio members and affiliates were handpicked to help draft the resources. The state Board of Education approved a final curriculum in March of this year, which remains highly influenced by Union del Barrio.

One of the most radical elements of the model curriculum, and the subject of Wu’s lawsuit, is the inclusion of chants to multiple Aztec gods. Purportedly included to encourage peace and unity, the chants are recommended for students and teachers to perform together in the classroom.

The curriculum includes the “In Lak Ech Affirmation,” in which students chant to the Aztec god Tezkatlipoka (traditionally associated with human sacrifice and ritual cannibalism). They also chant to other gods, including Quetzalcoatl, to gain a “revolutionary spirit.” The affirmations implicitly tie pagan indigenous religion to the creation of a neo-Marxist “critical consciousness” that teaches students to see the world through a Marxist, oppressed-oppressor lens. Asking children to even voluntarily chant to these gods, even for fun and games, is a violation of the Establishment Clause prohibiting even the encouragement of prayer to various deities in the classroom.

Wu’s complaint further centers around the fact that these chants are not being presented objectively or for purely educational purposes. It would be one thing to teach students the facts regarding how pre-Columbian American societies lived and worshiped. But it is something else entirely to coerce students into acting out ancient religious rituals. The method in which the curriculum approaches these affirmations is not in the spirit of secular education, but that of prayer and religious belief.

By law, the government cannot mandate public prayer or explicitly support any particular religion. Can you imagine the uproar if the state Board of Education required students to pray to Jesus, ask for the intercession of the Virgin Mary, or pray towards Mecca during school?

Beyond the clear violation of the Establishment Clause, the affirmations create a situation in which students could easily be socially ostracized or pressured by teachers to engage in behavior that conflicts with their personal values. Students have a right to be free from this coercion, and parents have the right to inculcate their own values within their families.

Furthermore, ordinary teachers should not be required to become radical activists. Their primary purpose is to instruct our youth and form them into productive, well-educated members of society, not indoctrinate them into “critical consciousness” via pagan prayers.

I spoke with a Physical Education schoolteacher from the Santa Barbara Unified School District who expressed serious concerns about the new curriculum. Beyond sharing many of the concerns already outlined in this article, she also mentioned a teacher training in which Ethnic Studies activist Artnelson Concordia actually made the teachers at her school perform an Aztec chant. She described the experience as “cultish.” Teachers were unwilling to speak up against Concordia, resulting in the entire room of educators praying to pagan gods that demand human blood.

As shocking as the Aztec chants are, they are only the tip of the iceberg when it comes to the radical material found in the ESMC.  As Ethnic Studies is perhaps on its way to becoming a graduation requirement in California, ordinary Americans should support the lawsuit against the California Department of Education because a victory will reverberate in other states where similar efforts are underway. Make your voice heard, and do not sit idly by.

We’d be better off to just build a wall on the California border with Arizona and Nevada. There’s nobody left in California worth trying to save, and their refugees are polluting the rest of the western US. We need to treat them like Haitians – ship them back where they came from. Or, we could just ship the entire population to New Zealand, Australia or China where they could enjoy the same kind of autocratic government they seem to prefer, and then we could repopulate the state with sane people who could appreciate it.

Make ‘me play by their own rules!

“Encouraging” school children to engage in Islamic prayer has happened a number of times already. I found references for separate instances in 2010, 2014, and 2015 in less than a minute of looking. Each time, the schools at most “apologized” for overstepping bounds. In one instance that I remember hearing about, but couldn’t find the reference on, the boys were lead in the Islam affirmation of faith, which, according to Islamic tradition and law counts as a conversion subjecting them to the rules of Islam, including the penalties for heresy.

Back around 2003 or 2004 I was on a field assignment that involved a lot of the schools in the Los Angeles Unified School District. In one classroom, I saw this Let’s Pretend muslim stuff going on. The kid dressed up as some sort of “leader” was quite obviously a retarded child mainstreamed into a regular classroom. Fairness, you know!

Anyway, there is all of these chants and mumblings going on, and this poor kid looked so confused and scared.

What is ANY of this sort of thing doing in ANY classroom? I have old fashioned views about many things, including the idea that schools are for math, reading, writing, language, civics (not social studies), and some grounding in cultural things like art and music.

On that last part: if some “reverend”, “community leader”, or “mullah” complains about “western”, or “white” culture dominating the arts and music, there is a one word reply: “tough!”.

The right needs to expand their Lawfare. Take this proposal do a ‘search and replace’ for Jesus, make it a graduation requirement in a red state and force the d/progressive to fight against the idea of establishing a religion requirement in public schools. Worst case they win and create a circuit split which advances the ball, potentially, to SCOTUS.

Does their Aztec religion plan include sacrificing students to Tlaloc to make the rains come?

Well I’m sure they’re all “pro-choice,” so yes.

(In case you can’t do the math, that’s not even a converging series.)

“Minority uplift” is just dumbing things down. Now in its sixth decade of work bringing America down.

Plenty of “minorities “ do just fine. The others likely would as well if the “programs” for them went away.

It would be interesting to see the reaction if some in the room would recite the Apostles’ Creed instead. Let them challenge it.
.

A variation on that theme: various Christian groups are demanding a return of prayer in the schools.

I wonder how much “this is NOT what we meant!” will be heard when some teacher puts the prayers on rotation among the students, and little Achmed recites something from the Koran, little Sammy does “hear, o Israel”, or Apu does something in a Hindu tradition?

Education and religion are inextricably intertwined. There is no such thing as religious neutrality in education. All education is based on some conception of “the good”. This is a religious function.

As long as schools are being run by government entities, Government will be involved in religious indoctrination. The only question is “whose religion”.

Get the children out now. Demand that funding follow students rather than institutions. Keep government out of curriculum decisions.

“All education is based on some conception of “the good”. This is a religious function.”

I disagree. The concept of “the good” as taught in a government school is based on government policy and law. What that law is based on is a subject of dispute, but at least it’s not based on anything teachers make up.

Atheist George Smith makes a very good case that the “classical liberal” concept of freedom/liberty descends directly from the historical “accident” that Europe after the Roman Empire developed a tradition of the State and the Church being distinct entities (two masters), with the inevitable tensions that entails; as opposed to the monolithic far eastern tradition of the church being defined by the state, or the Muslim tradition of the state being defined by the church. Europeans encountering issues where neither side cared, or both sides disagreed, had to make personal choices, and this was where the seeds of personal liberty took root.