The woman in the picture is not thrilled the LA Times used a deceiving picture of her: “Are you covering for racists?” 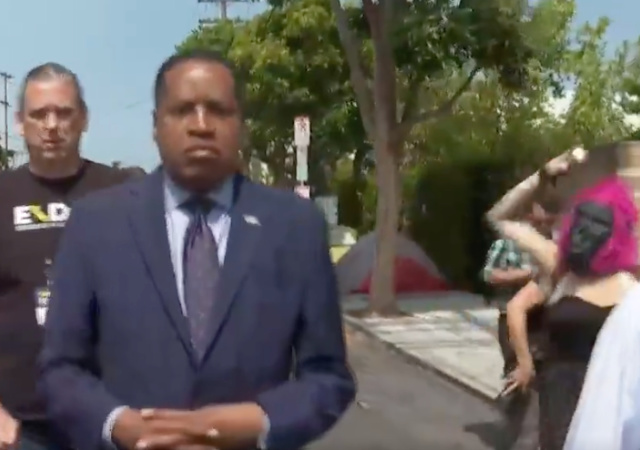 The publication used a photo that makes it look like Elder is slapping a woman instead of a picture from the attack.

The headline made it sound like Elder had a part in the attack: “LAPD is investigating altercation at Venice homeless encampment.”

The woman in the picture scorched the LA Times.

Want to know how evil the U.S. mainstream media is? Read this. pic.twitter.com/t6PnQeo5Sw

Yesterday @larryelder was my guest. We were attacked by a group yelling racial slurs, a white woman in a gorilla mask threw eggs. Yet @latimes finds a deceiving pic of us about to hug to confuse the story- a HATE CRIME was committed against a black man running for Governor of CA pic.twitter.com/RJxm2rmDiw

Disgusting. California might recall Democrat Gov. Gavin Newsom. If the state succeeds it will have another election. Elder could become California’s first black governor if he wins that election.

But it’s okay. He’s a race traitor because blacks cannot be a Republican, right? The mainstream media is so disgusting.

“This is completely absurd,” communications director Ying Ma told the DCNF. “Larry went to give a supporter a hug and the LAT used a photo taken at an angle that made it appear as if he was hitting her.”

“Perhaps you should ask them,” she responded, when asked why the LA Times would use the misleading photo.

Just when you think they can’t stoop lower…

When will Democrats wake up – the Dem party has been hijacked by terrorists.

It’s maddening: so many of them just don’t get it. They’re like friggin zombies.

I love Bob Hope – that clip is a classic.

They really are NPCs.

And where else have you ever seen a white person throwing eggs at a black person? While wearing a black gorilla mask?

All kinds of racial sensitivity training and then when someone comes along who really needs it nobody cares.

Saw a poll headline from Politico, Newsome is going to pull it out.
The fix is being gas lighted or wishful thinking ?

I really hope I am wrong and we can vote our way out of this problem. I think our elections are rigged.

That is why I say the threat of 2A is our only hope. Let them howl when it happens. They can howl louder behind bars.

Unfortunately, US elections are rigged. We will never again have a free election. That is why the Dems are acting like they don’t care if people know the truth. They know that they can’t lose.

If ‘voting machines’ are involved, forget it.

He knows the fix is in.

That is a mighty tough argument to overcome for anyone challenging the Communists.

This morning’s East Bay Times has a front page article about a new poll showing Newsom with a huge lead, and has it in the bag. As you get to the end of the article you find it was an online poll. LOL.

They think (probably correctly) that Republicans don’t trust the mail in voting and will show up big on Tuesday.

My guess is this poll coming out on the weekend is designed to suppress that from happening.

The LA Times building is way past scheduled for a “mostly peaceful protest.”

Or, a mostly peaceful urban renewal.

Or mostly “ignore that rag”.

Such sleazy, greasy, dishonest, vile and despicable propaganda tactics. But, what else would we expect from the shameless and morally bankrupt Dhimmi-crat media lackeys? They take their profession ethos and cues from communist propaganda organs.

All’s fair in love and war.

Anyone here who doens’t get we’re at war is no less ignorant than the democrat zombies we criticize.

You are correct. They are actually doing what they said Trump “would” do, given the chance.

I like Larry Elder. But he is running in the People’s Democratic Republic of California. He has as much chance of winning the recall are you or I do of defeating Kim Jong-un in a North Korean election.

With that said, he is helping to expose the complete lunacy of the lunatic left. His very run does this. The left in this country needs to be destroyed as it was in Europe in the 80s when I was there. We left some unfinished business here.

Since sane people are fleeing California, Newsome will probably win.

I hope those voters get everything they deserve.

The big wyestion: after he survives the recall, what new delights has he in store for California.

What could he accomplish? He’s a lame duck from day one with the communists holding every other office state-wide.

I think that it truly is gruesome,
That there’s this here guv’nor Newsome.
His smile’s a big smirk,
His ways do not work,
And with Kameltoe–a twosome!

Add Biden – put their heads together – and it will still be a twosome.

It’s plausible, but not probable. Modern jurisprudence advises that he be sentenced to a decade of hard labor, perhaps isolation until he repudiates violence against unarmed women and diversity [dogma] (e.g. sexism… genderism? – feminine attributes), inequity, and exclusion.

I’m hopeful the CA recall will be successful and a Larry is the next Governor. That would be great. I’m also a realist and I’m watching CA and VA. In VA we’re called the “Old Dominion” state. Not the reassurance I’m looking for.

The Democrat Propaganda Ministry is more evil than Pravda ever was