“[Harris] is placing blame on agents to deflect because she and Biden are not going to change how they are handling this.” 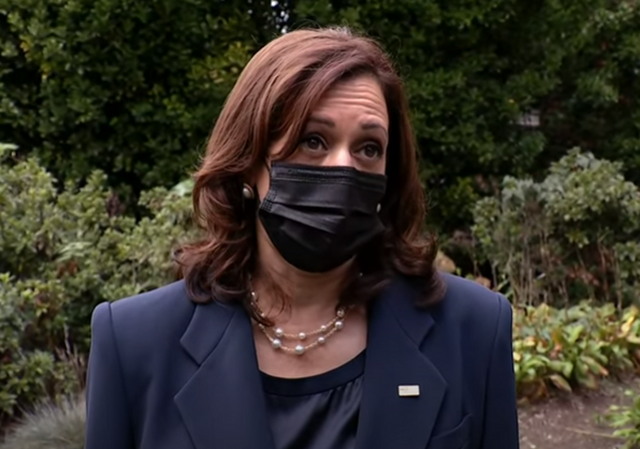 Democrats and the media have been silent for days about the appalling situation in Del Rio, Texas, where over 10,000 illegal border-crossers have been packed under a bridge.

It was only when a completely false narrative about Border Patrol agents using whips on migrants from Haiti that journalists and Democrats finally spoke up.

Kamala Harris, who is supposedly in charge of the situation at the border, but has said nothing for weeks, is now advancing this false story.

In this report by Brett Samuels of The Hill, Harris doesn’t mention whips, but the implication is clear. Harris is faulting the Border Patrol for the “horrible” treatment of the migrants:

Vice President Harris on Tuesday condemned the treatment of Haitian migrants at the southern border after images circulated appearing to show Border Patrol agents on horseback grabbing individuals seeking to enter the U.S.

“What I saw depicted, those individuals on horseback treating human beings the way they were was horrible,” Harris told reporters after an event to promote the White House’s economic agenda.

“I fully support what is happening right now, which is a thorough investigation into what is going on there. But human beings should never be treated that way, and I’m deeply troubled about it,” she said.

The Department of Homeland Security (DHS) earlier Tuesday announced it is investigating the treatment of Haitian migrants by Customs and Border Protection agents after video and images surfaced of the agents on horseback chasing down migrants at the southern border.

“DHS does not tolerate the abuse of migrants in our custody and we take these allegations very seriously,” the department said in a statement on Twitter. “We are committed to processing migrants in a safe, orderly, and humane way. We can and must do this in a way that ensures the safety and dignity of migrants.”

The audio of this video isn’t great, so turn it up or use headphones:

Peter Hasson of FOX News reports that Border Patrol agents are “furious” over the way Harris framed the issue:

"She is placing blame on agents to deflect because she and Biden are not going to change how they are handling this."

"It just proves what absolute idiots they are." https://t.co/Yra7AZ2fg6

Border Patrol agents who spoke to Fox News were angered by the pile-on from the administration, and accused it of trying to deflect from its inability to control the border.

“This whole situation is blowing up and even liberals are turning on this administration,” one agent told Fox News. “[Harris] is placing blame on agents to deflect because she and Biden are not going to change how they are handling this.”

Another source was more blunt, saying that the outrage “just proves what absolute idiots they are.”

“With basic knowledge and two brain cells, anyone knows those agents use split reins. They do use them as a whip, on their horses,” the agent said. “This helps get a quicker response from the horse to move out when needed, especially when the horse may be hesitant with groups of people or other animals.”

“Again it is clear that those ‘in charge,’ a term that is disgusting to use, have no clue about our operations and frankly operate by ignorance and unhinged emotions,” the agent said.

Again, Democrats and the media said nothing for days as this turned into a humanitarian crisis. It was only when they found a (completely false) narrative they felt fit their political cause that they said anything.

I'm still in awe12,000 people were kept in squalor conditions, sitting in their own shit, in makeshift tents, in 100 degree heat for 4 days and our media completely ignored it, until they could use one photo to scream "how inhumane" at the top fo their blue check lungs. Frauds. https://t.co/CDmCEzFvXo

What’s to investigate? They ain’t here anymore. Read the next story down.

They were hit so hard with the reins they flew all the way to Laredo.

Kamala is confused. She heard some talk about whips and it peeked her interest. “Whips? Really? Count me in! Look into it! I want a piece of that!?

USA IS NO LONGER A FREE COUNTRY

The media is controlled and censors what the rulers do not want the people to know. Then they push a narrative – no matter how disconnected to reality.

Our founding fathers must be rolling over in disgust at this and in the complacency of the people. We The People are being fooled by these ruling con-artists into losing the little liberty that remains in America.

Editors of the 15 largest media organizations and the owners of those organizations control this country with their comrades in the DNC and the establishment Rs. They decided that they can best hold power by destroying the middle class and instigating a race war. China and Russia are delighted to pull strings behind the scenes.

What happened to the country I grew up in ? My country ?

What happened to the country I grew up in ?

It’s the story of the frog. If the :frog is put suddenly into boiling water, it will jump out, but if the frog is put into tepid water which is then brought to a boil slowly, it will not perceive the danger and will be cooked to death.

Stick a fork in. He’s done.

We gave it to the GOP.

What is especially infuriating is that the agents on horseback in the video will almost certainly be fired and prosecuted. If an investigation exonerates them the Justice Department will swoop in with charges of its own.

The Biden* junta has two goals: (1) divert attention from the bad economic news and Afghanistan debacle, and (2) terrorize the remaining Border Patrol agents into refusing to do their jobs, thus erasing the existence of the southern border.

Speaking of someone who needs to be horsewhipped…

It’s irritating as all Hell that this zombie story is still staggering. I mean, we could put a stake through its heart (pictures from the front AND the back of the “whipping” photo showing that the BPO was grabbing the shirt and the reign was floating free) and I even doubt that could kill it.

This will go down into history, just like, “Hands up, don’t shoot!” with about the same veracity.

The false narratives pushed by Progressives seems to live forever. The stories that push against the narrative seems to be lost in a day.

This is not a free country. We have political prisoners. We have a controlled media.

The despicable Sheldon Whitehouse is STILL pushing the “Kavanaugh is a rapist” narrative.

Governor Abbott, do your job!’n

Best way to become President is for Abbott to take charge in a way that Biden refuses to do. All the governors together has as much power – or more – than the President. Time to Act.

I suppose Harris sould be considered an authority on occurrences on the border, her having visited there once in the past 8 months. She is the least qualified, most useless VP in the history of the country, and because she is such an ego maniac doesn”t realize she is a laughing stock.

Hmmm. Who.knew parrots could be sluts, too.

Speaking of dumb and useless:

Where in the World Is Carmen Sandiego? She and Rona were last seen helping Hunter Biden sterilize used needles.

Yet nothing on why they say we can’t close that border.

The lock fell off and Hunter Biden has it.

He used it to lock in his profits from his art sales.

The vile Dhimmi-crat apparatchiks sowing racial discord, resentment and contrived, fallacious victimhood narratives, at every opportunity. As predictable and as immutable behavior as a rooster crowing at sunrise.

Maybe they need to issue ICE agents some reins to protect themselves.

Could we whip Cammy until she goes to the border? Hey, I bet Willie has whipped her.

” I bet Willie has whipped her.”

I won’t be taking any bets on that.

Wait until somebody tells her who’s in charge.

“’This whole situation is blowing up and even liberals are turning on this administration,’ one agent told Fox News. ‘[Harris] is placing blame on agents to deflect because she and Biden are not going to change how they are handling this.’

Another source was more blunt, saying that the outrage ‘just proves what absolute idiots they are.’”

I disagree with the above. They aren’t absolute idiots. They know what will play well in America’s newsrooms, editorial boards, and faculty lounges. Not with the millions of Americans who’ve ever sat a horse who know you can’t whip Haitians with your reins without your horse doing some crazy s***, Or stopping, looking at you, and saying, “You want me to do what?”

Seriously. Maybe I’m just not a good horseman. But I can’t imagine trying to whip a Haitian with my reins AND maintain control of my horse without a rodeo breaking out.

It just doesn’t matter to these liars if this story flies. They want a friendly judge to declare that the only way the Biden/Harris admin can atone for its sins is to send ships to Haiti and embark the entire population, destination U.S.

Ok. I’m not a good horseman. But I’ve occasionally tricked horses into thinking I know what I’m doing.

“They want a friendly judge to declare that the only way the Biden/Harris admin can atone for its sins is to send ships to Haiti and embark the entire population, destination U.S.”

“We owe Haitians the right thing of allowing them to seek asylum here.”
In the extended clip, she explains we owe this to them as a western hemisphere neighbor.
Really?
Don’t their other elebenty-seben hemisphere neighbors “owe” them anything?
Why is it just us?

Weird, I was told she was in charge of the border.