Israeli prison official: “The fugitives have together been responsible for the deaths of dozens of Israelis” 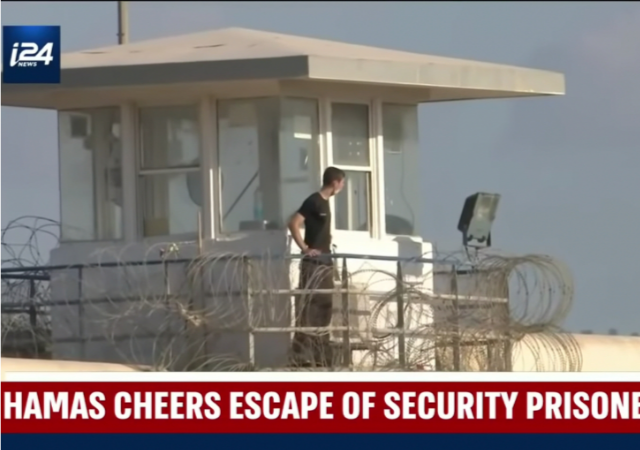 The Israeli police and security services have launched a massive search for six Palestinian terrorists who escaped from a high-security prison.

On Monday evening, six terrorists, including five members of the Palestinian Islamic Jihad and a high-profile terror operative from PLO-Fatah’s al-Aqsa Martyr’s Brigade, escaped through a tunnel that began from their cell. These convicted terrorists have blood on their hands. “The fugitives have together been responsible for the deaths of dozens of Israelis,” The Jerusalem Post noted.

The escape from the Israeli maximum security prison appears to have been meticulously planned, and the fugitives reportedly had help from outside. “It’s clear that they did not do it by digging, but rather lifted a cover and used the space in their cell,” a senior Israeli prison official said.

The Times of Israel reported the terrorist prison break:

Large numbers of police forces were called to the area around Gilboa Prison, located northwest of Beit She’an, near the Sea of Galilee, and were searching for the six fugitives with the help of drones and helicopters. The military and Shin Bet were also helping search for the suspects, and checkpoints were put up in the area.

Four of the six fugitives were in jail for life in connection with deadly attacks against Israelis; the fifth — a notorious commander in Fatah’s Al-Aqsa Martyrs Brigade terror group, Zakaria Zubeidi — was in prison while on trial for two dozen crimes, including attempted murder. Another was held in administrative detention. All six were considered highly dangerous.

Gaza-based Hamas called it a “day of joy.” The Palestinian Islamic Jihad called the prison break by some of its most notorious terror operatives “a great heroic act.” The ‘moderate’ Fatah, which controls the Palestinian Authority, hailed the “tunnel of freedom” that helped one of its top masterminds escape Israeli prison.

The Israeli TV channel i24News reported the celebrations among Palestinians over the escape:

Palestinian groups celebrated the escape of six inmates from the Gilboa high security prison in northern Israel on Monday evening, calling the escape “heroic” and urging Palestinian civilians to help the convicts to continue to evade Israeli authorities.

In cities of the West Bank and Gaza, Palestinians honked their horns, waved flags and handed out candy to mark the occasion.

“This is a great heroic act, which will cause a severe shock to the Israeli security system,” said Daoud Shehab, spokesman for Palestinian Islamic Jihad: the Gazan organization to which five out of the six escapees are affiliated.

Hundreds of supporters gathered in Gaza, and militants sent incendiary balloons across the border into Israel in support of escaped prisoners. Israeli authorities said three fires were started by the balloons, but were quickly extinguished.

Fawzi Barhoum, spokesman for the Hamas movement that rules Gaza, said the escape shows “that the struggle for the liberation of the occupier is continuous and extensive, inside and outside prisons.”

Hamas officials have urged Palestinians to provide assistance to the escapees by ensuring that further escapes will take place. Husam Badran, a senior Hamas official, called the day “a day of joy and pride, when the Palestinians hold their heads up high.”

The Fatah party of Palestinian Authority President Mahmoud Abbas also hailed the escape. An official Twitter account posted photos and videos of Fatah’s most famous escapee, Zakaria Zubeidi, including with Abbas, and hailed what he called the “tunnel of freedom.”

Residents of the West Bank town of Beita celebrate the escape of six militants early Monday from an Israeli prison. pic.twitter.com/Sur2iDk98w

The Jerusalem Post reported details of the manhunt underway to catch the terrorists:

Police, the Shin Bet (Israel Security Agency), Border Police and troops from two IDF companies as well as Special Forces are taking part in the manhunt, and have placed some 200 roadblocks throughout the country to catch the escapees. Security forces are also utilizing special units in the search involving dogs and aerial support.

“Our goal is to catch and arrest them – as long as there is a possibility that they are in Israel,” he said.

The IDF Spokesperson’s Unit said that troops in the West Bank have been alerted to the escape and are on high alert.

Amid this large-scale manhunt, some news reports suggest that the terrorists may have succeeded in fleeing the country. “It is believed that by now, the terrorists are deep within territory belonging to the Palestinian Authority, and that they are likely to make their way from there to Jordan,” the Israeli broadcaster Arutz Sheva reported.

Just like fellow muslims did in New York on 9/11. We should know where their hearts are .by now.

Terrorists belong in the highest security prison, it is called a grave.

Tell that to the Israeli prosecutors, who announced several years ago that if the government asked them to consider capital charges against terrorists they would refuse. The government can’t order them to do anything.

perhaps it’s long past time that we stopped looking at murder thru the European Union’s lens: in the U.S.A., Britain, Israel, and other liberal, civilized countries

You can’t get useful intel from a corpse.

You get intel before you bring charges, not after. By the time the guy is convicted and your up to sentencing you’ve already got all you’re going to get.

The reason Israel hasn’t executed anyone since Eichmann isn’t the need for intel, it’s leftist “ethics” on the part of the prosecutors and the judges. They don’t care what the law is, to them European liberal values override the law.

true, however you can be pretty damned certain that an executed terrorist will never harm anyone else

My tinfoil hat tells me that Israel is more competent than this.
Within a month, we’ll discover that Israel helped dig the tunnel, all six of the men were chipped, and homing munitions are all ready for dispatch just as soon as the men have had time to get into position to “light up” their high-ranking comrades.

If only, but no. They are not nearly competent enough for that.

If a criminal is convicted of murder, they deserve a death sentence.