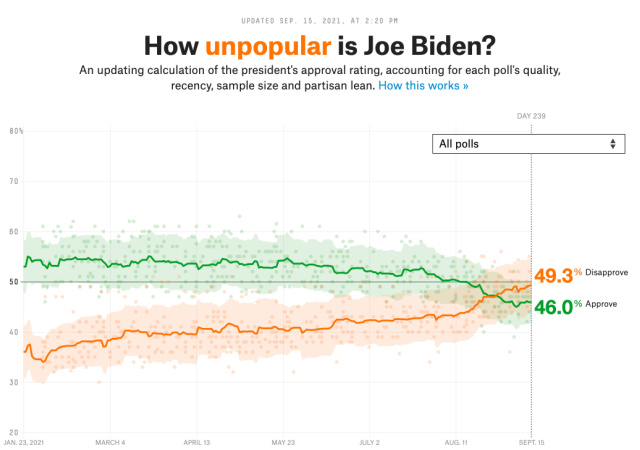 Biden continues to sink in polls. FiveThirtyEight combined all of them to find that 49.3% of people disapprove of Biden.

But a recent The Economist/YouGov poll, Biden’s overall approval rating is at 39%.

My first reaction was: why so high? It should be something like 2%, if that.

My second reaction was: it’s about time.

My third reaction was: so what? Biden can do a lot of damage anyway. After all, no one is about to remove him unless his approval falls down way below that and polls indicate it will really really hurt Democrats in Congress in 2022 and Democrats figure that they can’t cheat enough to overcome that effect. They also have to figure out who would be best to replace him, and how to go about making that happen if it’s not Kamala Harris.

Only those or other practical considerations might get the Democrats to activate a Biden-ectomy, and if so it will most likely be done not through impeachment but through the more face-saving 25th Amendment or forceful arm-twisting of Biden to effect a resignation for health reasons.

However, looking at those poll numbers we also see the following (approval/disapproval numbers in that order):

Who are these supposed GOP members who still approve of Biden? As Stephen Green writes: “I don’t know how Biden managed to get a positive nod of approval from 9% of GOP voters, unless The Economist/YouGov oversampled the Bill Kristol household.”

The numbers indicate to me that “white men no degree” are quite savvy. Whereas “white women with degree” – a group of which I happen to be a card-carrying member – are at best gullible and/or uninformed. Note also that black voters are not as keen on Biden as black voters usually are on Democratic presidents, and Hispanic voters really aren’t all that fond of Biden. Independents have soured on him, although a lot of them were fooled at the time of the election and probably are in some ways most responsible for placing him in office because many of them constitute the all-important swing voters.

But how does all of this translate in terms of votes? Leaving aside for a moment the real possibility of fraud in elections, does disapproval of Biden mean that people now regret their votes for Biden – and even more importantly, will it mean they will be less likely to vote for Democrats in 2022 and 2024?

A Zogby poll taken in August indicates that one in five 2020 Biden voters say they regret their vote. In addition, that poll was taken from 8/5 to 8/13, which was before the full disaster of the Afghanistan withdrawal had unfolded. I cannot imagine that event enhanced most people’s feeling of satisfaction with their 2020 Biden vote.

“I don’t know how Biden managed to get a positive nod of approval from 9% of GOP voters, unless The Economist/YouGov oversampled the Bill Kristol household.”

I would also suspect that the Bush clan was over-sampled as well.

And the Romney and McCain lovers.

And McConnell and Romney and Collins and…

Part of the problem here is the perpetual symmetry failure in the graph — that 5-10% of useless Americans who, if you surveyed them after a nuclear holocaust about their feelings on the imminent extinction of humanity, would still be unable to commit to being either “fur er agin’ it.”

McConnell is a good guy imho.

Exactly. They official don’t care about approval ratings anymore, because they know they can just cheat to victory.

The ONLY thing that matters at this point is approval from The Right People, who support him 100%.

At least we have some internals here. That being said the sources are hard left learning so we know the numbers are in fact worse.

Biden has no floor because he never really got 81 million votes. And, there are NO Joe Biden super fans at all.

And this is from a group of pollsters that largely ‘lean Dem’. Where ‘lean’ means they love Comrade Biden and are willing to rig their polling a bit to help him out. Like by oversampling Dems, a little or a lot.

And with a Dem-media propaganda complex that has been in overdrive trying to protect President Alzheimer’s and convince the clueless that everything bad is still the fault of Trump and his supporters.

Who are these supposed GOP members who still approve of Biden?

We call those “GOP members” RINOS. Republicans In Name Only. And they infest the Republican Party like rats infest a cargo vessel.

Weirdly, the vast majority of them seem to hold elective office. Among the rank and file, RINO behavior is far less common than it is in congress.

>> Actually they ate right about the 20+% of people who are just sheep and deserve whatever they get.

I’ve met exactly one RINO regular guy in my life. He called himself a Republican but voted for Obama twice.

He was from NY and of course thought he was right about everything.

On the other hand, his choices were… what?
Daddy Bush and Mittens Romney?
Enough to make me want to vote Cool Moose Party instead.

They also have to figure out who would be best to replace him, and how to go about making that happen if it’s not Kamala Harris.

If they want to replace Joe Dementia before 2024 they’ll need to replace Harris first.

It would be entertaining to watch them try. I doubt Kneepads Harris would go down without bringing as many of them with her as she can. She ‘worked hard’ to get this far and won’t go quietly into the night.

It will be some scandal related to money, as it was with Spiro Agnew. To most of us, it will seem trivial compared to (just to pick a random example) Hillary’s cattle futures or the Clinton Foundation scam. But, all at once, the entire political-media complex will act as if it is the worst crime in history and will demand her resignation.

The funny part is that she will then almost certainly be replaced by Nancy Pelosi – who is nearly as senile as Joe.

Yeah, she’s got the worn knee pads to show for it too.

BIDEN Administration represents the ABORTION of DEMOCRACY and LIBERTY.

What a crazy world? Biden’s honey moon is over, but Obama is still on his.

Obama was a big deal for just about all black folks. It didn’t matter if he was aligned with the Cuban Communist Party.

The “White women w/degree” group tends to lean left because they want the government to take over all of their responsibilities so they can “live their best lives”. They’re just a bunch of parasites.

They are often the ones with useless degrees that reflect their politics rather than knowledge. They are merely continuing their useless range of thought…that is as ignorant as a New Guinea mountain woman, but with less skill and more hatred.

not all of them

I think Biden could get 1 vote, Jill’s, and still win. The fraud is open and unabashed and the GOP and Courts, including SCOTUS, clearly approve. Because they are in the hands of the deep state. I remember a case in Hawaii, where years later a judge admitted he ruled the way he did was because the entire court system was run by a union, and he would have been driven from the bench in a week if he ruled otherwise.

Did you expect differently of the imbecilic POS.

So just like Obama, and I suspect just like Obama his re-election will have a great deal more to do with what/who we put up than Joe Biden. If we put up tax cuts for billionaires, reducing the benefits enjoyed by the working class and jacking up the military budget as if aliens are invading we will lose.

I see lots of similarities to Carter. Weak and ineffective.