The leftist urge is always to control, silence, oppress, and suppress. 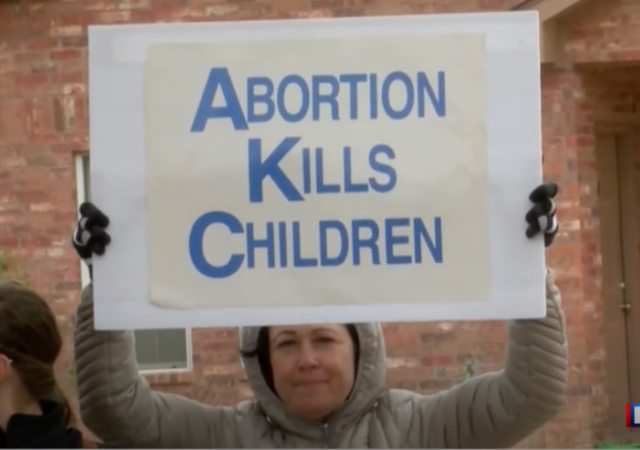 The leftie meltdown over the Texas “heartbeat” law and the Supreme Court’s inability—on procedural grounds not on the merits—to intervene is ignorant, hysterical, and hyperbolic.  These perpetually outraged people are exhausting. And ridiculous.

Anyway, the ignorance of the law and of the Supremes’ decision appears to have resulted in the deplatforming of a Texas pro-life tip website.  GoDaddy gave the site 24 hours to find another host.

The Texas Right to Life group will have to find a new hosting provider for its website that encourages people to report violations of the state’s restrictive new anti-abortion law.

GoDaddy now says that the website has less than 24 hours to find a new hosting provider. “Last night we informed prolifewhistleblower.com they have violated GoDaddy’s terms of service and have 24 hours to move to a different provider,” GoDaddy told Ars in a statement.

. . . . GoDaddy told Ars that “the site violated multiple provisions, including, but not limited to, Section 5.2 of our terms of service.” That section is the one that prohibits sites from using GoDaddy to “collect or harvest… non-public or personally identifiable information” without people’s prior written consent.

Honestly, this seems pretty legit to me. But how many leftie sites does GoDaddy apply this policy to? And yes, that matters, for a policy to be a policy and not a weapon, it must be applied fairly and across the board.

And it’s not just GoDaddy, Digital Ocean apparently hosted the site for a few hours before also removing the right to life group’s website. They now appear to be hosted by Epix, but the site is not accessible as of this writing.

Update at 6:15 pm ET: Texas Right to Life responded to our inquiry, saying that its “IT team is already in [the] process of transferring our assets to another provider and we’ll have the site restored within 24-48 hours.”

“We will not be silenced,” the group also said. “If anti-lifers want to take our website down, we’ll put it back up. No one can keep us from telling the truth. No one can stop us from saving lives. We are not afraid of the mob. We will not back down.”

Update at 9:45 pm ET: The website went offline briefly but is now back. Its new hosting provider, Digital Ocean, also has rules against violating people’s privacy, including one that bans “[c]ontent that… is intended to harass, abuse or invade the privacy of any individual.”

While the abortion whistleblower site points to Digital Ocean name servers, its domain registrar is Epik, which has served controversial platforms such as Gab, Parler, and 8chan.

Update at 12:35 am ET on September 4: Digital Ocean has apparently cut off hosting service, as the anti-abortion website is now using Epik for its name servers and as its domain registrar.

I’m not a fan of “snitch” sites, and I had a great deal to say about Obama’s “flag the fishy” website when it was run out of the White House and later about AttackWatch and its various incarnations.

These ridiculous endeavors were cancelled by their owners in the face of severe mockery and pushback, not by their web hosts, and this is an important distinction.

I may not like the Texas pro-life abortion snitch site, but it is (or should be) up to them to shut it down (in the face of severe mockery and pushback), not to some leftist pro-abortion activist web host.

The leftist urge is always to control, silence, oppress, and suppress. That is not good for a free and open society . . . as they well know.

I think you may have misdiagnosed the leftist urge. It seems to me that their real urge is to punish. To claim to be better than the offender du hour.

The offense doesn’t even matter. All that matters is that they have someone to belittle, bully, and make an example of.

We need an entire economy running in parallel.

After 12 year relationship with GoDaddy, I dumped them four months ago when they started this BS, and moved to EPIK. Enough is enough.

A lower court just stayed the Supreme Court. Texas law on hold despite Supremes. Might cause harm to abortionists. .

How can a lower court stay a higher one?

It didn’t. Alaskabob is misreporting the facts.

A Texas district court judge issued a temporary restraining order against a specific set of parties, forbidding them to sue a specific defendant until a hearing on the 13th.

This has nothing to do with the Supreme Court’s decision, does not contradict it in any way,

Here is the actual document.

Well, no. That not only cannot but did not happen.

Huh?! What are you on about now?

This is correct, thank you Milhouse. Please everyone read the prof’s post about the Supremes’ ruling. Nothing anyone (besides Milhouse) is saying here makes any sense.

Having no more information the the two previous comments….. The lower court (a District Court or a state court) may have received an application for a stay that Identifies some action allowed by the new law, or possibly stimulated by the law, that can be deemed irredeemable… say physical injury or death, from someone who thinks the law gives them license to do so. The court involved decided to stay the law until this particular issue can be adequately examined.

This is one scenario that the initial appeal to the Supreme Court lacked, (irredeemable to legal harm to someone or something) causing the SC to decline to act, at this point. Depending on whether this new action will generate enough of a case to again, properly involve the SC, is unknown. Only time, and details, will tell.

Releasing a posse with no sheriff to do your enforcement for you is not an a stable arrangement, if you’re planning on having a system of law in the future.

Cancel culture is no better either, also a system of private enforcement but without bothering to have a law.

Mr. Hardin, I am going to be kinda with you on this. Ms. Slippers and Mr. Milhouse, what do you belive the current state of our country is? This is a simple question that should not require a complicated answer.

You really need to read rhhardin ‘s comment again. And again. And so on, until you fully understand what he said. If you still agree once you grasp his point, that’s fine, but at least work to that “aha” moment.

As to your question, I’m not answering you because you can’t comprehend basic sentences and points. Not exactly inspiring, right?

I mean you no disrespect ma’am

This made me laugh
🙂

Not only do I think I understand it, I don’t understand why you originally took issue with it. He’s talking about the unintended consequences of a government having brownshirts and Karens to perform law enforcement for them. Report your neighbor.

In my wheelhouse, it’s if you see anyone carrying a gun, call the cops. It can and does happen.

There is a whole lot of projection and scientific illiteracy in this article.

Do tell. Or you do you just make vague, unsubstantiated comments for fun? How, specifically, am I engaging in a “whole lot of projection” in this piece? I’m really eager to find out what you think I think! What fun!

There I have done exactly what you did an unsubstantiated lie. One jackass to another using insults instead of arguments is the sign of a non-existent mind.

If GoDaddy drops you, they are doing you a favor. They are the very worst that you can find. They should hire some technical people.

I just shot off an email to 3 clients offering to move them to another host for their websites my consultancy manages for them. By signing up to another besides GoDaddy, they’ll save about 30% in the first 3 years. Agree that GoDaddy is not very good in the shared hosting services (not dedicated server space), and they nickel and dime you for every added feature that others offer. If those 3 clients weren’t legacy GoDaddy customers, I would have made this suggestion earlier. Now I’m motivated to do it.

My question on this whole thing is about the precedents the law is setting. As I understand it, private citizens who have no standing and have not been harmed by the abortion provider and staff can now, under this law, sue them. So they can face lawsuit after lawsuit after lawsuit from perfect strangers and have no recourse to recover the costs even if the lawsuits are dismissed? Do I have that right? So, if this precedent is set and holds up, how can the Left use this against the Right farther down the line? And is that really a wise can of worms to open?

1. The persons sued first have to break the law. In this case by contributing to an abortion after a fetal heartbeat is detected, which is currently illegal in Texas.

2. They can only be successfully sued one time per illegal abortion.

3. The left largely controls our legal system so, yeah, there’s worms all over the floor.

If they killed your child they have harmed you, and the law permits you to sue them.

The question to ask when this happens is “Where is my state house member and why isn’t he working to deplatform (in this case GoDaddy but in other cases other companies).

Corporate America respects one thing only and it is no longer money (You can’t boycott a united corporate America you will starve in a few weeks) it is power and we need to start wielding every single bit of power we have.

So screw them, they want to behave like tyrants lets put the taxes up on them, lets add some new public square regulations and declare them public utilities and regulate them accordingly.

Do you feel it is horrible that Verizon can’t do this? If not why should GoDaddy be all0wed to?