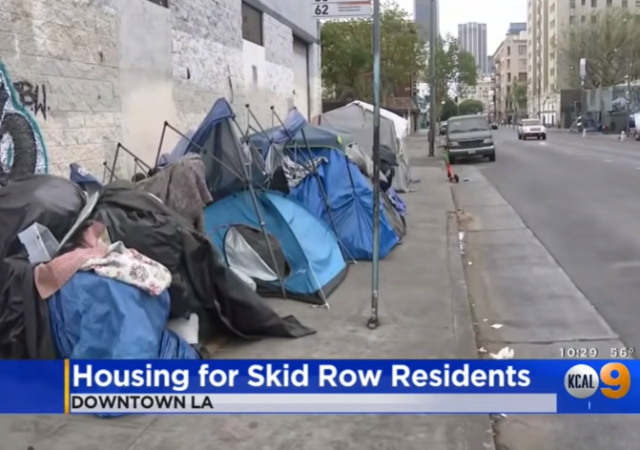 A coalition of groups has sued the city and county of Los Angeles, California, to force the housing of homeless people living on the notorious stretch known as Skid Row.

A federal judge ordered the city to act, but the 9th U.S. Court of Appeals has just overturned the order.

The homeless problem in Los Angeles and other cities was a driving factor in the failed effort to recall California Governor Gavin Newsom.

The 9th U.S. Court of Appeals on Thursday overturned a federal judge’s sweeping order that required the city and county of Los Angeles to quickly find shelter for all homeless people living on downtown’s Skid Row.

The appeals court found extensive error by U.S. District Court Judge David O. Carter, who is overseeing a major lawsuit about the problem of homelessness in Los Angeles.

The appeals court found that the plaintiffs lacked standing to bring most of their claims in the lawsuit and that Carter based his preliminary injunction on claims and theories that were not made by the plaintiffs.

Carter issued the 110-page order in late April that slammed local officials’ inability to restrain the unprecedented growth of homelessness that has seen encampments spread into nearly every neighborhood in the region.

The order gave the city and county 180 days to house Skid Row homeless and to audit any spending related to the crisis of people living on the streets.

The lawsuit was brought by a coalition that includes business and property owners, landlords and others who allege that inaction by the city and county on the problem has created a dangerous environment.

The good news is that all is not lost.

Ethan Ward reports at the LAist:

Elizabeth Mitchell, an attorney with Spertus, Landes & Umhofer, representing the L.A. Alliance for Human Rights, said the ruling was vacated “in the best possible way” because it was done so on procedural grounds, which can be quickly addressed.

“We’ll be filing an amended complaint in the next few weeks and we will be right back in Judge Carter’s court,” she said. “I think the reports or talk that this is a bigger deal or that the alliance case is over is absolutely false and couldn’t be further from the truth.”

Mitchell said the alliance would have welcomed a negotiated settlement with the city and county, and only filed the motion when it became clear any possible agreement was going nowhere.

“The city, I believe, is trying to get there, but the county needs to engage with real offers that will help solve this crisis,” she said, adding that they could have fixed things a year ago.

The homeless problem in California is clearly out of control, and the same could be said for other American cities.

They HAVE shelter. They don’t want to use it because most of the shelters have strict no-drugs rules.

They’re junkies that like living on the streets. I am so sick of this bullshit of pretending they aren’t druggies constantly searching for their next hi and whining about ‘OMG they’re just down on their luck’. A handful, maybe, but those are the ones that go to shelters, look for jobs, and get back on their feet.

Exactly right! I was a beat cop on Oahu and we tried to get the homeless off the beaches in West Oahu with little success. I asked one homeless guy once and he told me there were too many rules.

The thing that sucks is that many of the beaches in West Oahu are overrun by homeless meaning that the taxpayers don’t get to enjoy them. A while back homeless tried to take over Ala Moana Park next to Waikiki. Now THAT didn’t work! Location, location, location. You can do it in Waianae and Maili, but no do it in Waikiki, brah!

Wait. What about white privilege, You mean to tell me that white skin don’t do shit to prevent white people from experiencing poverty.

Eric Garcetti should be forced to live on the street, on skid row, for the rest of his life.

That would be justice.

the vagrant problem can be broken down into a simple acronym:

Crazies: there is now, thanks to stupid judges and brain dead “activists” a right to be mentally ill. you can’t force them to get care, take their meds, or anything else, so they wind up on the streets. figure them to be maybe 40% of the herd.

Addicts: they won’t get clean until they decide they want to get clean, so they live on the streets and stay high. they are somewhere around 30% of the problem.

Tramps: why got to w*rk, hold down a j*b, pay taxes, bills, etc, when you can live on the street and spend everyday doing as you please? if it gets too hot or too cold, you check in for a few days, then go back out. it’s a helluva gig, if you don’t mind some inconveniences. figure them to be 20% of the total problem.

Out of luck: good people who have bad things happen to them. this is the ONLY part of the population that accepts help, gets into programs and gets off the street. they are maybe 10% of the total population.

I think there is probably a significant overlap between the crazies, addicts, and tramps groups.

The judge should demand a membership list for all the plaintiffs, then order each member to house at least one homeless person.

I say clean them out , take them to DC and leave them there.
We don’t owe them anything amd if fact they spit on our generosity

I get your point … but don’t we owe something to ourselves? Sure … we’ve tried all sorts of things … thrown money at the problem … etc etc … and little of it has seemed to help. Yet there they are … humans living like dogs that are cared about by almost no one. IMO … we should have enough humanity to keep trying to fix the problem and find a way that works … rather than washing our hands of it. We won’t be able to help everyone but we can do better than we have.

What you mean we, white man?
“We” is what Progressives talk about when they want to solve a problem THEIR way with YOUR money.
Patriots talk about “what *I* did about the problem (and you could do the same if you weren’t all talk).”

To those who have posted negative or hateful comments on the homeless. Imagine having a brother , sister , aunt , uncle , mother , father that has severe mental issues and that has been rejected by their family? Think about how that would feel if that were you? Alone and rejected and living out in the street , begging for money or food. Just because some not all of the homeless are addicts , junkies or alcoholics does not make them less human. If those who refuse servcies or going to a shelter they must provide where and how they will provide for themselves and where they willl live? Most of the homeless are mentally ill and have given up on themselves. It does not make it better than the City of Los Angeles which has taxed the fuck out of every resident in this city has promised to resolve the problem but did not. Eric Garcetti has failed as a mayor and he cannot leave the city fast enough. Instead of spewing try being part of the solution by volunteering or out spoken on how this fucking city council will get these people off the street?

ldiaznew56–I think your premise fails. “Imagine having a brother , sister , aunt , uncle , mother , father that has severe mental issues and that has been rejected by their family?”
So, going with YOUR premise, I have this imaginary relative that has been rejected by the rest of the family. I guess I gotta step up and help this relative–otherwise I’m rejecting the relative just like the rest of my irresponsible family.

I know people who are in that situation and believe me, it is a hopeless task. Have you ever known anyone whose brains are permanently scrambled on meth? There is no rehab. They will steal from you, lie to you, get violent,…. They will destroy you. They need to be institutionalized.

These are people who made very bad choices in life and will make them over and over again getting the chance. Get over feeling sorry for them. Tough love will not help either. You cannot help them. But they WILL destroy you if you let them. That’s just the way it is.

What a ridiculous hypothetical.
If I have a brother, sister, etc., who has been “rejected by their family,” then that would already include me, wouldn’t it? Then I would know what reason I had for rejecting them, and probably wouldn’t change it. Like, perhaps, tough love after being stabbed in the back three or more times.
If you (as in, not me) decide to help them, then that makes you an enabler. Are you comfortable with that? If you want to p* your money down a black hole to enable my deadbeat relative, I guess it’s your money.
People “down on their luck” should be taken care of BY their families, or friends (if no family). If the person is “not all there,” somebody who cares can arrange a conservatorship.
If nobody in your family or friends cares whether you live or die, perhaps you need to re-evaluate your life. You may just be the one at fault.

My thinking is their first explanation was they were going to deport them, ( doubt they planned that anyway and that the invaders tossed away IDs was going to thwart that anyway) but now they gyned up that cock-a-mania story of whipping the invaders it’s that’s not who we are, they can all stay now for being so mean.

I think you’re in the wrong thread. We’re talking about the (predominantly) citizen homeless, not illegals.

The death rate among the homeless is very high and getting worse. Considering that LA provides needles and even drugs to them, maybe the plan is to help them kill themselves in the most conspicuous places. To shame us. The shame belongs with the government and their land developer partners that attract them to the LA in the first place and then use them for political/business advantage.

Perhaps the homeless can replace the baby/fetal carcasses in planned parent/hood clinics? Oh, the irony of life renewed in abortion chambers.

Antihistamines and azithromycin as a treatment for COVID-19 on primary health care – A retrospective observational study in elderly patients
via market-ticker.org

Between March and April 2020, 84 elderly patients with suspected COVID-19 living in two nursing homes of Yepes, Toledo (Spain) were treated early with antihistamines (dexchlorpheniramine, cetirizine or loratadine), adding azithromycin in the 25 symptomatic cases. The outcomes are retrospectively reported. The primary endpoint is the fatality rate of COVID-19. The secondary endpoints are the hospital and ICU admission rates. Endpoints were compared with the official Spanish rates for the elderly. The mean age of our population was 85 and 48% were over 80 years old. No hospital admissions, deaths, nor adverse drug effects were reported in our patient population. By the end of June, 100% of the residents had positive serology for COVID-19. Although clinical trials are needed to determine the efficacy of both drugs in the treatment of COVID-19, this analysis suggests that primary care diagnosis and treatment with antihistamines, plus azithromycin in selected cases, may treat COVID-19 and prevent progression to severe disease in elderly patients.

Not so novel. People are either immune, resistant, or recover with early, affordable, safe therapeutic treatments. Planned parent/hood was excess deaths forced by Choice.