The budget increase comes as Chicago has its deadliest year since 1996. 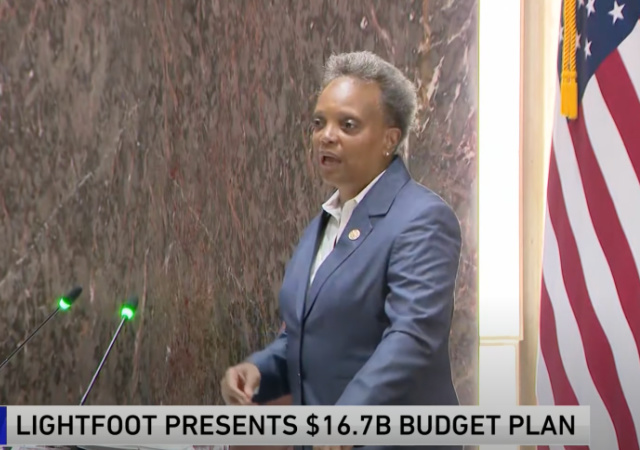 Chicago Mayor Lori Lightfoot’s $16 billion 2022 budget includes $1.9 billion for the police due to rising violence in an already violent city.

That is $2 billion more than the 2021 budget. The far-left is going to go nuts on Lightfoot.

The budget also includes $3.4 million for an oversight board for the department. The mayor wants to provide more resources to “officers suffering from traumatic experiences while on duty.”

Lightfoot has tried to play both sides on the police funding debate since George Floyd’s death in May 2020. For example, in October 2020, Chicago CBS discovered Lightfoot’s budget proposal included slashing $59 million from the police.

However, Lightfoot said the city would achieve it “by not filling hundreds of vacant jobs in the department.”

But Lightfoot made a stronger stance to support the department after two men murdered Officer Ella French and injured her partner in August. She promised the police budget would increase.

The mayor now wants to fill those vacant positions with resources from the city. She did not provide details for the 1,066 slots. 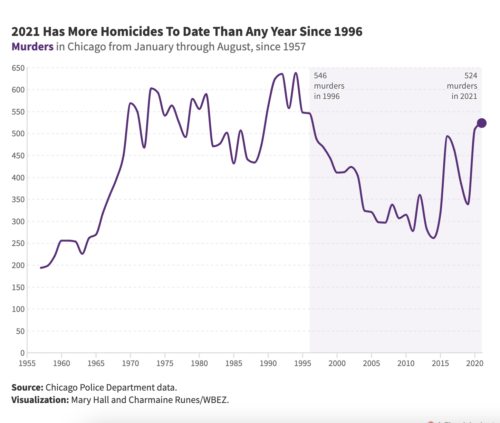 It’s not getting any better. This past weekend, 56 were shot and nine died.

Five were killed over four hours.

Over Labor Day weekend, eight children under 17 were shot. A four-year-old died after he was shot while getting a haircut in the living room. Overall, 67 people were shot that weekend.

In other budget news, Lightfoot will use $385 million in federal relief funds along with $299 million in savings to fill in the $733 million budget gap.

Lightfoot said this keeps the city from passing new taxes or massive fee increases on citizens. They will face “modest” property tax increases.

The original Mayor Daley always wanted larger funded programs because it was easier to conceal money skimmed from the program. Mayor Lightfoot learned from him.

I thought they were defunding the police and paying criminals not to kill each other.

The people who put this moron in office (if you think she was honestly elected, I have a “Barack Hussein Obama” (or whoever he really is) to sell you) didn’t expect even her to be so appallingly stupid so soon. Same with puppet-president Biden.

A bag limit, and, following the DC precedent, a novel apology for self-defense. They’re not criminals… criminal-criminals, but rather forward-thinking social influencers and pioneers of modern jurisprudence.

Fox Butterfield is mystified. How can violent crime be on the rise when the police are being defunded?

As always not too much but way too little mugging mayhem murder malarkey in Det Phil Balto Chi DC NYC etc. As per contemporary standards.

Afghanistan is still safer than Chicago. Think about that for a moment.

The Windy City has not seen so much violence since 1996, which had 796 murders.

It’s worse. The Near North Side, home to the Mag Mile, the Gold Coast, and most restaurants, nightclubs, and hotels has already seen 6 murders, dozens of shootings, and almost too many to count muggings and robberies at gun point.

This was unheard of in the part of the city in 1996. This was formerly one of the safest areas in the city, if not the safest. This is where almost all hotels used by tourists are located,

LA and NY are no different. But then, Lightfoot is the Triumverate of Stupid the left put in place in NY, LA and Chicago.

And we let them. Say: WHERE THE HELL IS THE GOP ON ANY OF THIS? WHERE IS GOP CHAIRWOMAN RONA ROMNEY HIDING??

Demos-cracy is aborted in darkness, but the bodies are discovered in plain sight. Once you elect to abort for social progress and other light and politically congruent (“=”) causes, there is only the masque of privacy that prevents accountability. Basically, under the established Pro-Choice religion, just do it, if you can get away with it. That’s where women and men’s dignity and agency are denied, and human life is reduced to a negotiable asset. A coalition of willing RNC and DNC should look forward, not backward, and mitigate this progress.

Good luck trying to stuff that genie back into the bottle. Once the social contract is broken, and violent crime is lionized as “mostly peaceful protests”, it is near impossible to restore what was lost.

I also wonder if violent crime is higher than what has already been reported. The police have been severely diminished by the ACAB insanity, so how many victims of rapes, robberies, and assaults no longer bother to report the crimes?

They’ll cut down crime by locking up enough bad people and increasing patrols. But the apple of Chicago has rotted from within, just like the left’s America.

“Chicago had 524 murders in 2021 by the end of August.”
****
Chicago PD numbers homicide numbers are low; murders on interstate in Chicago not counted, some are kept in murder investigation category, late deaths are added after the years ends, etc. Most accurate number is considered to be the running “score” kept by heyjackass.com. Latest homicide number is 612…39 more than this date 2020.

“The mayor now wants to fill those vacant positions with resources from the city.“.

Making the dubious assumption that the funding will, in fact, be returned to the the police there is still a problem. The 1066 empty slots, almost all sworn officers, are increasing at an increasing rate due to retirements and resignations. There is no rush of cops or wanna-be cops to Chicago to fill them. The tide is going the other way. Who in their right mind would sign up to be a cop in Chicago today?

To use the past, pluperfect, subjunctive: They are scrod.

“Chicago Mayor Lori Lightfoot’s $16 billion 2022 budget includes $1.9 billion for the police due to rising violence in an already violent city. That is $2 billion more than the 2021 budget.”

Not unless the 2021 budget actually required police to pay $100M to the city.
Is it time to go long on taillight manufacturers?

I don’t think she’ll face any criticism at all because she’s a gay black leftist of ambiguous gender features.

Besides, defunders didn’t really want to defund right… that was the whole backtrack wasn’t it? They just want to send it elsewhere to “social programs”, so this “police budget” will spend more on fake police stuff than real police resources. Then, hundreds more murders will occur and someone else can be blamed since they didn’t defund the police after all.

“In other budget news, Lightfoot will use $385 million in federal relief funds along with $299 million in savings to fill in the $733 million budget gap.”

Does she have anyone that can do math on staff? Those numbers don’t add up…I know that 50 million or so is pocket change for wasteful politicians but someone’s gonna get a little more cutting, and it probably won’t be social welfare or CRT initiatives.

It’s not an accounting error, but rather income inequality, which is sometimes a straw man argument, other times em-pathetic extortion, and other times a sociopolitical career with “benefits”.

I was assured this person was supremely qualified for this job given her sex, dark skin, and desire to sleep with other women.

How does a little four year old getting a haircut in his living room end up being shot?? What kind of SICK SOCIETY allows that to happen so often that most people say “that’s just Chicago being Chicago”?? Where is black lives matter on all these black on black murders?? Oh yeah, blm only applies if another race is involved!

You realy have to ask?
They’re luxuriating at the same lounge as GOP chair Rona Romney. We can’t find her either.

Will she send the bill to Indiana? You know where all the evil guns are purchased by merchants of death and then transported to Chicago where their very presence corrupts the previously angelic, law abiding residents?

Lightfoot is a total fool without any common sense and should have never been elected Mayor! Can’t the people of Chicago elect a law and order Mayor and Police Chief?

No, because Chicago is a Leftist fiefdom and the people have absolutely no voice in who rules over them.

She was elected because her opposition-Toni Preckwinkle-was even worse. Hard to believe I’m sure but these are the same voters who elected Kimm Fox.