If you have any information, please call the Riverside Police Department’s Property Crimes Unit at 951-353-7955. 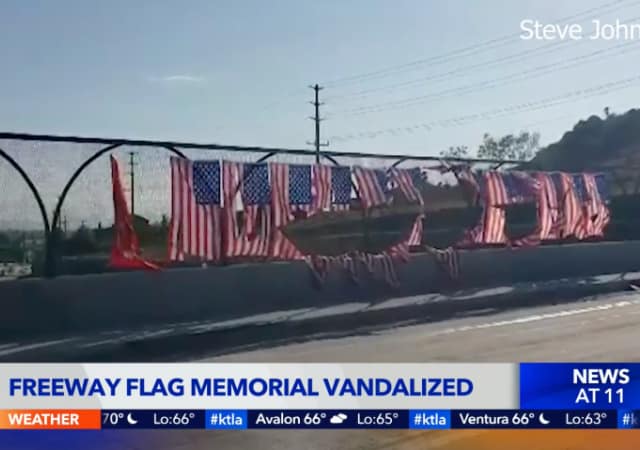 In California, the Riverside Police Department said someone vandalized 13 American flags and one Marine Corps flag honoring the fallen soldiers in the Kabul terrorist attack.

“Sometime yesterday, an observant citizen noticed the flags appeared to be damaged and it was reported to the police,” the department wrote on Facebook. “At this point, we don’t have any suspect description but it’s obvious the flags were intentionally damaged.”

Three Marines from Southern California died in the attack:

The others murdered in Kabul:

Of course they were. We live in hell right now

Unfortunately I think it will get worse before it gets better

And boy are they insane

Anyone surprised? Didn’t think so. Just look at who they elect.

Wise up Romey … ya want better people elected … get ’em on the friggin’ ballot. In CA each ballot is a bloody liberal freak show. We want better leadership but good leaders are rarely on the ballot here.

Somebody with a policy disagreement is making a statement “You can’t count on me to go along.”

It’s aimed at false patriotism and false piety, not the soldiers.

The left is crazy enough as it is. There’s no reason for the right to join them with bad readings of their own.

The right may want to say, No, that’s real patriotism and piety. The left doesn’t agree. That’s what the disagreement is about.

Being self-righteous about your own political position isn’t a great idea.

“May the righteous indignation of God crush out the proud and the unholy” – Erik Satie, in a performance direction

Flags torn – rhardin : “it’s a policy disagreement”. Sir, I don’t how you come that conclusion. That was a malevolent act of disrespect.

Aimed at “false patriotism”? Somebody posts flags to honor 13 who gave their all and that action can be interpreted as “false” patriotism? If showing respect for the fallen is “false” I’d hate to see where the line is that says “this is false and this is sincere.

By that logic, going to a National Cemetary and knocking over headstones is just another example of “policy disagreements aimed at false patriotism.

And being disgusted, upset, outraged, stunned, mortified or any other emote showing disapproval is “self-righteousness about my political position”

What it is … is a feeling of abject disappointment that can ONLY be felt by those who have served, because it tears at us in a way the 99% who never served will never feel.

You may INTELLECTUALLY understand the cost of the sacrifice – but you can never understand it deep deep deep into your heart and soul, the way the vet feels it.

Will say this – spare me your drivel.

We don’t know who did it – or why. Maybe we should wait until the perp(s) are caught before assigning motives.

“Maybe we should wait until the perp(s) are caught before assigning motives.”

Oh … you mean like they do to everyone on the right …

The flags were replaced and those were damaged. The Dems are against the flag as it has been found the flag does instill TRUE patriotism and traditional American values… both NOT Dem feelings.

Some guy just got several months in the slammer for burning a black lives matter flag. It wasn’t his property, the logic goes.

We’re in a civil war. Are we all getting it it?

There is an undeclared war against America.
We are losing.
Our children and grandchildren will suffer the consequences if we don’t step up.

Sad to say, but we’ve lost a good part of the nation forever. Our grandchildren won’t live the free and prosperous lives we did. Nor will our children.

That’s IF we stay a union of 50 states. If we secede, we and our progenity have a chance at a great life and a great future.

I see no other solution.
Build a big, beautiful wall.

Direct employ … I doubt it. But democrat … likely.

Who would do such a terrible thing? That’s as disgraceful as it gets!

Guys, we live in a world of opportunistic expression. One where folks were eating tide pods for internet hugs and kisses not too long ago.

Please place the Flag in a location that is not open to some rando desecrating it. Sadly these folks exist and don’t give a hoot about respecting norms.