“I just could not believe how ignorant she seemed to be.” 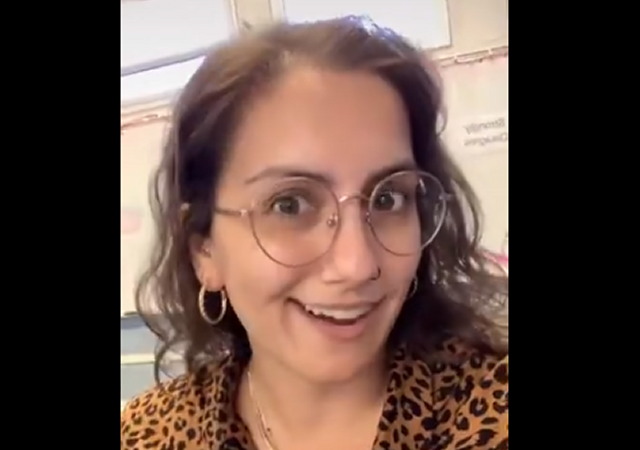 This is an update to a story we ran two days ago. This teacher needs to rethink her profession.

There are just over 160 students at Back Bay/Monte Vista High School, a small alternative education high school in Orange County. But one teacher’s video about how she handles the Pledge of Allegiance in her classroom is making waves far outside the school’s walls.

The sign for the high school was surrounded by dozens of small American flags on Monday, looking like a Memorial Day display. All of the red, white and blue was in response to a TikTok video posted by teacher Kristan Pitzen.

She tells her students they can stand or sit, say the words or not, during their daily announcements and Pledge of Allegiance.

“So my class decided to stand and not say the words… totally fine,” Pitzen says in her viral video about her approach to the Pledge.

She goes on to explain that there is no American flag in the room where she teaches.

“It used to be there, but I took it down during COVID because it made me uncomfortable,” she says in the video. But one day, a student commented on the lack of flag.

“But my kid today goes, ‘Hey, it’s kind of weird that we just stand and we say it to nothing,'” Pitzen said, adding that she told the student she is working on finding it.

“In the meantime, I do have a flag you can pledge your allegiance to. And he looks around and goes… oh that one?”

Pitzen then pans across her classroom to a pride flag tacked to the wall.

Early Monday morning, a small rally was held in front of the school as people gathered to show support for the American flag.

“Just super disgusted,” parent Stephanie Cox said in reaction to the video. “I just could not believe how ignorant she seemed to be.”

Outraged parents have been asking the Newport Mesa Unified School District to discipline Pitzen. They responded, in part: “Showing respect for our nation’s flag is a value that we instill in our students and an expectation of our employees. The teacher is no longer in the classroom.”

Mark this day on your calendar: Anti-American government employee gets cancelled for anti-Americanism. This may be my first mark on this year’s calendar.

Pull her teaching certificate. That will prevent her from teaching in other states as well.

Good riddance. Let’s hope she gets fired, but I doubt the union would allow it.

I miss “moral turpitude” clauses.
Today, they’re probably still in there, except you have to commit them.

Does “no longer in the classroom” actualy mean she has been fired from the school system, or is she still on the payroll with or without student contact?

My guess would be that she has been moved over to the School Policies Group. It’s impossible that the school admin didn’t know this about her. They’re complicit, they’re cool with her agenda, they have no problem with her promoting it. Only when the parents threatened their happy little coterie did they bother to bestir themselves.

Nice username. 🙂
Preferred the Mustang, myself, but yours was a great machine, too.