“As I have said all along, my belief whether or not to receive a vaccine is a personal decision, not something an overreaching government has the power to impose on an individual.” 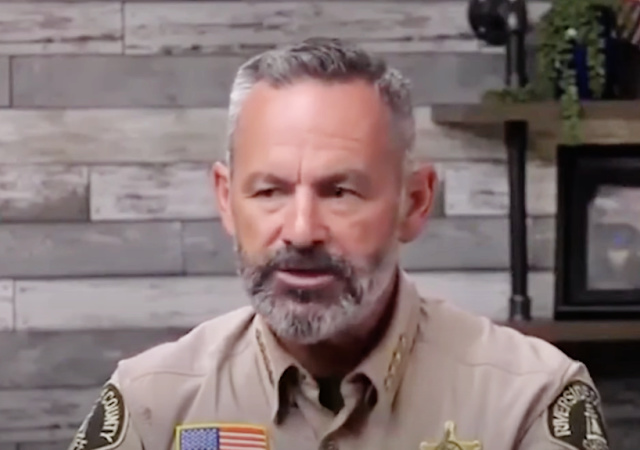 It seems Bianco did not word his original statement well. On Tuesday, he clarified that he will not force his employees not assigned to the jails to have a vaccine.

Bianco warned his department on Monday that a local newspaper planned to publish a story on the latest podcast from the department. He said a reporter would “use cherry picked statements from supposed health experts in an attempt to paint me and the Sheriff’s Department in a negative light.”

Bianco did not name the reporter or newspaper: “This is nothing but sensationalism trying to gain readership and further divide us as Americans.”

“Over the past couple of weeks, the idea of forced vaccination has caused much concern across the entire country,” wrote Bianco. ” There is absolutely nothing in my podcast that was incorrect or irresponsible. It is factual and common sense based.

“To repeat the context of the podcast, I will not enforce the vaccine mandate on Sheriff’s Department employees.”

Bianco reminded everyone that he is also “the last line of defense from tyrannical government overreach.”

“The government has no ability and no authority to mandate your health choices,” asserted Bianco. “As your Sheriff I have an obligation to guard your liberty and freedom.”

Bianco stressed he is not anti-vaccine. He is “anti-vaccine for me.” The Bianco family had COVID last winter.

How about a dose of truth: “That decision should be made in consultation with your doctor after discussing the potential benefit and the potential negative side effects.”

I’m thinking Bianco should have included a lot of facts in this statement into his original statement. Then again, the rest of the media could actually listen to the short podcast.

Bianco wrote another letter to his department after the local newspaper ran the story about the podcast. The reporter claimed Bianco is not following “state mandates which require COVID-19 vaccinations or regular testing of employees assigned to our jails.”

“Nothing could be further from the truth,” continued Biano. “We have extensive internal protocols and regulations which follow the state order requiring employees to either voluntarily report their vaccination status; obtain either a religious or medical exemption; or they will be required to be tested regularly in compliance with state regulations. These protocols have been in place before the state-imposed deadline.”

My podcast was broadcasted to specifically address the concerns of my employees and was aired AFTER the state mandates had been already implemented with our jail personnel. My employees wanted to know if I was going to voluntarily and unilaterally implement these same requirements for all other employees within the department, not just those employees assigned to the jails. There is no law or mandate for all employees to receive a vaccine, so therefore I will not go beyond what the state requires. As I have said all along, my belief whether or not to receive a vaccine is a personal decision, not something an overreaching government has the power to impose on an individual.

Bianco claimed the reporter never brought up the jail protocols or asked if he has complied with the mandates. The reporter also said he “didn’t address the state mandate for jail employees.”

“That is because they were already being followed!” exclaimed Bianco. “Instead, they chose to leave this very important detail out of their article and assumed inaccurate information by intentionally omitting factual information.”

More reporters would be respected if they tried to inform people instead of intentionally misinforming them. They have traded their respect for clicks and hate.

Today there are very few actual journalists, instead we have hordes of propagandists posing as journalists.

Even that lefty Cronkite was better than this present crowd.

WHEREAS the State of [Those-States-With-Balls] finds that there is a pre-existing right to bodily autonomy;

WHEREAS Covid-19 is a clear threat to the public, which must be balanced with that pre-existing right;

WHEREAS the actual risk from Covid-19 is highly-stratified and inconsistent from one person to another;

Whether by force, or choice through misinformation or disinformation, shared/shifted responsibility is a violation of human and civil rights.