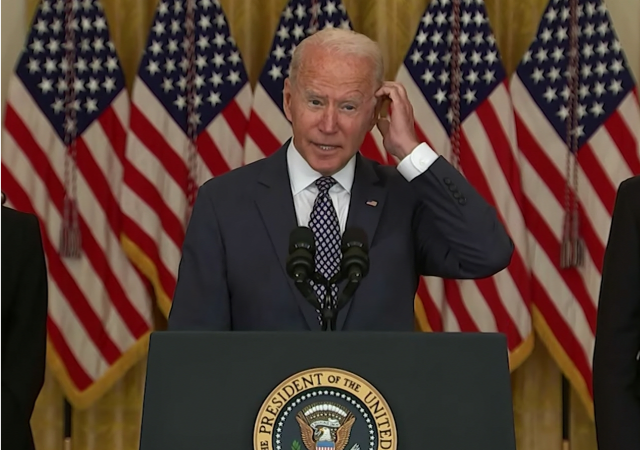 The Afghanistan withdrawal was a disaster, but it may also have been the gush of water that broke the dam for Joe Biden and his party. Biden’s job approval is in free fall, and that is bad news for Democrats in 2022.

Republicans were already favored to take back the House, but the Senate is more in play with each passing day.

The most important predictor of a party’s performance in a midterm is the president’s job approval rating. So, for example, the years where the president’s party has gained ground in the House during a midterm election have been years where the president has been exceptionally popular. The 1998 midterms occurred against the backdrop of a massive economic boom and an unpopular impeachment attempt from Republicans, while the 2002 midterms occurred while George W. Bush was still enjoying his post-9/11 bounce. Both presidents enjoyed approval ratings in the mid-60s on Election Day.

While we don’t have polling data for FDR in 1934, one can imagine that his job approval was likely well into the 70s. One the other hand, abysmal elections for parties in power have occurred when the president was generally unpopular: Witness 1994, 2010, and 2018. Thus, the trend in President Biden’s job approval has to be concerning for Democrats:

But Democrats’ chances of holding the Senate were slated to drop off quickly if the president’s job approval fell any further. At 50%, they would be expected to break even, but would lose control about one time out of four. At 49% job approval, the Senate is considered 50-50.

You can almost hear the sound of a car crash here (via RCP): 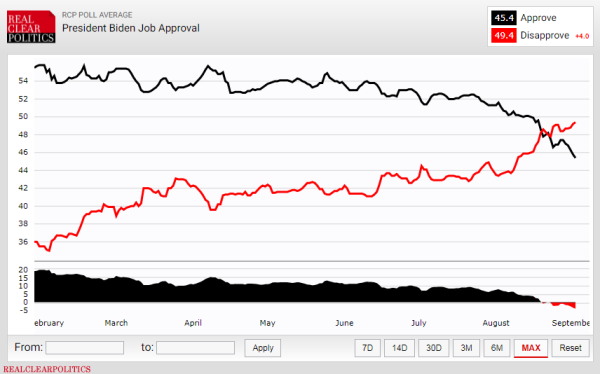 In the new NPR/PBS NewsHour/Marist Poll, Biden has dropped six points in a month:

– Americans who strongly disapprove of Biden’s performance jumped from 30% in August to 41% in this poll.

A new Rasmussen poll finds 52% of voters want Biden to resign and 60% want him impeached:

The worst part for Biden and Democrats is that the crisis in Afghanistan is ongoing. They are better armed than they were when we went in in 2001, and there are hundreds of Americans still trapped there. It’s scary to think of what could happen.

Abortion could turn voters away from republicans pretty fast though. Texas is a bad portent for what republicans would do if they got in. Voting democrat for protection from it is likely.

Except you are missing the fact most Americans are pro life…
And what exactly have the Dems done that isn’t literally causing most Americans to be absolutely terrified of their future!?! Every single thing they have done is wrecking absolute destruction….but yah…stick with…’I’m going to vote for the lunatic communist America hating Democrat who is destroying America and views US citizens with contempt because I’m upset some woman may have to kill her baby sooner”…geesh

TX did not ban abortion. It just put significant limitations on it.
Most Americans are fine with limitations.
Few Americans want abortion with no limits -even up to day of birth.
> Infanticide is not a winning policy – but some Dems still push for it.

They did two things, worst of all finding a structural flaw in the legal system that the supreme court apparently doesn’t know how to avoid, so it’s open season on any constitutional right at all until they do.

Second, the time limit is way too short. If you have irregular periods you won’t know your pregnant in time.

Also bad naming, it’s not a heartbeat. There’s no heart. I wrote a time sharing system once that had what everybody called a heartbeat once a second when the panel lights flashed bright as it looked for something to do. It only needed a law against turning it off.

“My guess is that people will vote their political predeliction and if they overturn Roe it will hurt the Republical cause in the political situation because it will take people who are relatively conservative market oriented on economic affairs and more liberal on social affairs like abortion and force them to choose between their two principles and most people will vote their moral principles before their economic principles so I think it will be a rough time for Republicans under these circumstances.”

Sure. The American economy is in free fall, the southern border is in chaos with thousands of Wuflu-infected illegals and MS-13 gangsters being bused all over the country at taxpayer expense every day, inflation is soaring, the Taliban are back in power with almost $100B in free military equipment gifted to them by the Biden* junta, hundreds of American citizens are now Taliban hostages in Afghanistan, major American cities are killing zones thanks to “defund the police”, the violent domestic terrorist groups BLM and Antifa enjoy quasi-legal status and government protection in deep-blue hellholes like Portland, the neo-Nazi CRT is being forced onto tens of thousands of schoolchildren, the voting systems in blue cities and states is a Third World joke – nope, none of those issues matter more to Americans than protecting the right to grind human babies into hamburger.

All they have to do is put lipstick on it an call it an historic success like they did for Afghanistan withdrawal.

If the American people keep Democrats in under such conditions, they deserve what they get. I’ll believe the GOP or conservative independents have a chance when my deep indigo and dreadfully gerrymandered state throws out most of its Congressional delegation and both Senators.

I find your (and the article writer’s) naive belief that the elections will be honest enough to matter amusing….. if you’re three years old.

Yes protecting the vulnerable is a bad look for Republicans and protecting murderers will catapult Democrats to massive victory. Is that what you’re saying?

If you think the average American is “ok” with sucking the brains out of viable, human babies, and then going around “tweeting” and “shouting” your abortion, then you are moronic fucking lunatic, like the rest of the proggies. Fuck off, baby killer.

Half of women are pro-life.

The people most likely to vote Democrat solely to “protect” abortion are already Democrat voters. And I think the swing voters who are swamped with all of the Democrats’ disasters are not going to forget all that just because Texas restricts abortions.

Normal people don’t base their votes on any one issue. You’re dreaming if you think a law that provides weak protection for babies who are detectably alive is going to switch a significant numbers of votes.

RH, you are a real son of a bitch. Stealing ice cream combs from young octogenarians and fucking free speech.

But, but…..what about Biden’s “historic airlift?”

Kinda like FDR praising the Navy for cleanup after Pearl Harbor. And blaming Hoover for the whole thing to boot.

That airlift that would not have been necessary if the pedophile-in-chief were not a complete and utter retard?

I fear for multiple dramatic & violent actions in “celebration” of the upcoming September 11th anniversary – here in our great nation, in Afghanistan, and elsewhere in the world where Americans can be targeted.

This nation’s “leaders” SHOULD be protecting Americans against such events. Regardless, we should all be vigilant in protecting ourselves and our families.

I do NOT want such actions to occur. But if they do, I can imagine even the more-dense voters may finally turn away in horror against these evil + incompetent Democrats.

Though that might mean the @FBI would have to reassign some of “special” agents away from their crack Garage-door Rope-Pull Task Force. I know, it’s an urgent matter of #RulingClass priorities yet to be decided.

Sorry, but the crack Garage-door Rope-Pull Task Force is unavailable because it has already been reassigned.
The Feds Are Trying to Understand Why McDonald’s Ice Cream Machines Always Seem Broken

“Biden’s job approval is in free fall, and that is bad news for Democrats in 2022.”

CNN reports an emergency order has just been submitted for 50 million more absentee ballots. China’s xi jinping said he will get on it right away.

I don’t think Xi needed to be told, nor do I think he takes orders from Biden. Just the opposite.

I think that “order” was more like a requisition than a command. Payment to follow in 30 days or less.

Those Chinese are so good at servicing and anticipating the needs of America’s consumers that they will pre-fill the ballots, too!

A. We live in a country where 43% are complete morons; or,

B. The pollsters are manipulating polls to try to show more support for Biden.
_____

I do not believe polls anymore because the media play so many games.

My guess is that the true support for Biden is less than 12%.

I’ve seen some of the polls samplings are D+14🤡🌎

IIRC, even after the fall of the Soviet Union about 35-40% of the population longed for a return to the good old days of communist rule.

Democrats will just mobilize their cheating game. Watch for some of the most corrupt Senate races since, well the last time Democrats ran.

Biden has become in very short order, a turd in the Democrat Party punchbowl.

Let’s see what happens, if anything, after the Maricopa audit report is released. Let’s see if the GOPe ignores it.

Don’t worry…they will just manufacture a crisis with the help of the media and have Joe come to the rescue and bravely solve this fake crisis just in time for midterms!

“Republicans were already favored to take back the House, but the Senate is more in play with each passing day.”

I’m still of the opinion that the easiest way to take back the Senate is to promote Kamala out of the tiebreaker chair and into the Oval Office. It’s not like the people puppeting Biden will suddenly get more competent just because the puppet changes, and anything she does on her own initiative is almost guaranteed to be even less competent than they are.

Hey Dems, you gonna need a bigger fraud than 2020.

Or a different one. Hopefully enough folks are wise to the multiple ways the 2020 election was impacted and will be alert for a repeat in their communities.

You borrowed that Hand job title from Fifth Column.