“Barb Feige, executive director of the Tree of Life, said that Biden did not visit the synagogue in the nearly three years since the anti-Semitic attack.” 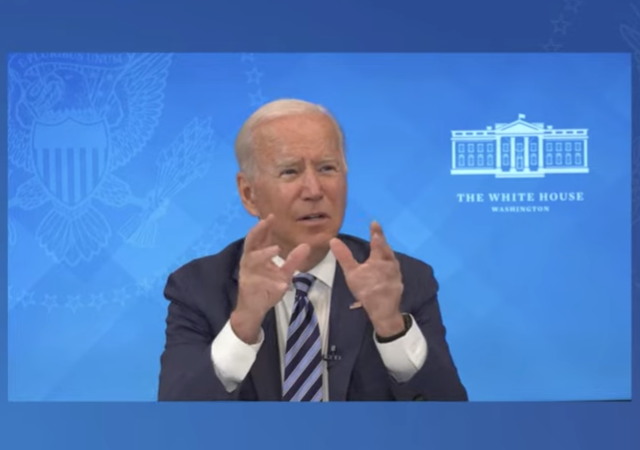 During a discussion with Jewish leaders on Thursday, Joe Biden talked about visiting the Tree of Life synagogue in Pittsburgh, which was the site of mass murder in 2018.

Biden is known for tall tales, and leaders from the synagogue are saying there is no record of his visit.

President Biden on Thursday told Jewish leaders that he spent time at the Tree of Life synagogue in Pittsburgh after the October 2018 mass murder of 11 people there — but the synagogue told The Post he never visited.

“I remember spending time at the, you know, going to the, you know, the Tree of Life synagogue, speaking with them,” Biden said in a 16-minute virtual address ahead of the Jewish holidays Rosh Hashanah and Yom Kippur.

Barb Feige, executive director of the Tree of Life, said that Biden did not visit the synagogue in the nearly three years since the anti-Semitic attack.

In a phone interview, Feige, executive director since July 2019, said firmly that “no” Biden didn’t visit, even before taking office when he had a lower public profile as a former vice president and then-Democratic presidential candidate.

The White House did not immediately respond to requests for comment.

Then-President Donald Trump visited the Tree of Life three days after the worst anti-Jewish hate crime in US history. Trump was joined by prominent Jewish members of his administration, including his daughter Ivanka Trump, his son-in-law Jared Kushner and Treasury Secretary Steve Mnuchin.

Notice how Biden talks about “hate” without ever addressing the poisonous anti-Semitism from certain members of his own party like Rep. Rashida Tlaib and Rep. Ilhan Omar.

And who knows what Biden is thinking about when it comes to this supposed visit. He is prone to telling stories that are partially true or not true at all. He has been doing it for years.

Our “president” is pathological

Was that before or after he visited Mandela at Robben Island?… Tree of Life synagogue disputes Joe Biden's claim he visited https://t.co/W8jQT1bYab

Biden fabricated this story too? How on earth can he make this up, about Tree of Life of all places? What’s wrong with him? And the press lets him get away with it, so he’ll keep doing it. https://t.co/lW6VYwMpMM

He also said he visited Mandela in prison in South Africa.

HE SAYS WHAT HE THINKS PEOPLE WANT TO HEAR
– TRUE POLITICIAN

It seems that to know where one visited one would first need to know where one is at any moment in time. I suggest that this is an unfair test for Joe as it appears to be beyond his capability. However, he was qualified to be the Democrat POTUS candidate.

Sorry, it was actually a Doubletree Hotel in Vicksburg. Never mind.

There is also no record of his being raised in a Welsh colliery, but this what happens when you elect an alcoholic fabulist.

Or, he drinks Fabuloso.

Biden, who came out of the civil rights movement: “If you don’t vote for me, you ain’t Jewish.”

So did he lie, or was he just delusional? Maybe and instead of or?

Maybe he should replace Kamala with Brian Williams as VP, Then could both claim (in unison) to be in places they never were. Double down on the lies.

To round out the foreign policy experience, the Biden Harris Administration should add Hillary Clinton, who came under fire in Bosnia, and Senator Richard Blumenthal, who served faithfully in Vietnam.

Just wait for it. Given the trends of things, contradicting the Beloved Leader when he is claiming to have done something good will become an imprisonable offense. In a special prison.

Oh my……Biden making up a story about something he did that turns out to be absolutely false. This lying leftist tool has been doing that long before he had Alzheimers. This is something leftists do regularly, but of course the media will completely ignore it…were it Trump making that up, it would run front and center on CNN and MSNBC for days. One of my favorites is Hillary Clinton landing in Bosnia in 1996 and saying ‘we ran with our heads down, under heavy sniper fire’. Of course, those with her reported no such thing happened, and that was confirmed. Leftists are all prolific liars, but never get called on it as the media refuses to portray them in a negative way….which might hurt their reelection chances.

Joe is so out of it, he thinks he needs to chase the Jewish vote he already has.

He is virtue signaling and chasing moral high ground. (He will get there when Sisyphus gets his rock to the top of the hill.) These are games that the libs like to play, even after their actual behavior indicates a depraved moral standing.

Maybe Joe’s mental issues are the end stages of Sisyphus?

Pure virtue signalliing. Had every intention of going. Equal to going. C’mon, man.