“I know you’ve never faced those choices, nor have you ever been pregnant. But for women out there who have faced those choices — this is an incredibly difficult thing. The President believes their rights should be respected,” press secretary Jen Psaki told a male reporter Thursday. 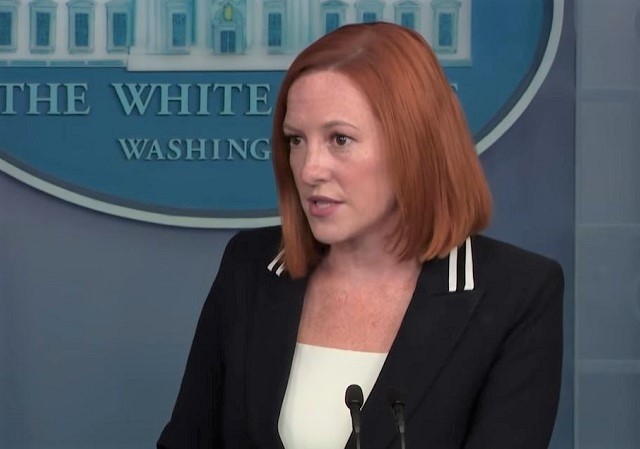 As we reported yesterday, the U.S. Supreme Court in a 5-4 ruling refused to halt the Texas Fetal Heartbeat law on procedural grounds, which predictably sent the Usual Suspects on the left into fits of apoplectic rage.

Some, like “Squad” leader Rep. Alexandria Ocasio-Cortez, proclaimed that the ruling was the equivalent of overturning Roe v. Wade (it wasn’t), while others, like Dolly Parton’s rabidly left-wing sister Stella Parton, declared in a bizarre Twitter thread that “women in America are being treated worse than women in Afghanistan.”

Jensen: “And following up on the Texas law, why does the President support abortion when his own Catholic faith teaches abortion is morally wrong?”

Jensen: “Why does the President — who does he believe, then, should look out for the unborn child?”

Watch Psaki use her female privilege below to snap at Jensen for asking the question a lot of people, including Catholics, would like a straight answer to:

EWTN's @OwenTJensen: "Why does [Biden] support abortion when his own Catholic faith teaches abortion is morally wrong?"

Psaki: "He believes…it's a women's right. It's a woman's body & it's her choice… I know you've never faced those choices, nor have you ever been pregnant." pic.twitter.com/EcagHX0BTJ

First of all, let’s call out Psaki’s answer for what it was: sexist. Needless to say, she would not have given the same snide retort had a female reporter asked the same question. Her answer also assumes that all women would agree with her. That is definitely not the case as millions of women in this country are pro-life.

Secondly and perhaps even more interesting was how the White House has apparently abandoned the use of the term “birthing people” to describe people who can give birth (women). In addition to Psaki’s remarks, the term wasn’t in Biden’s official statement on the SCOTUS ruling, either:

Conspicuous lack of “birthing people” in Biden’s statement. Funny how that works. Women only get to be women when it suits his agenda. pic.twitter.com/YUoLIHXoAL

If you’ll recall, a few months ago it was noted that the term appeared in Biden’s budget:

This is woke, anti-science nonsense. pic.twitter.com/42atcoe11s

Here’s how the administration defended its use of the term at the time:

During a congressional hearing Wednesday, Deputy Director of the Office of Management and Budget (OMB) Shalanda Young defended the 2021 Biden budget proposal’s redefinition of mothers as “birthing people.”

Republican Representative Jason Smith, a top-ranking member on the House Budget Committee, noted that the replacement of the word “mother” for the gender-ambiguous phrase, in reference to funding maternal health care, was unprecedented for a budget plan.

“The budget requests $26 million to reduce maternal mortality and eliminate race-based disparities in outcomes among ‘birthing people.’” Smith said. “This is a shift from recent budgets that referred to maternal health issues as women’s issues. I’ve never heard the term before, can you explain what it means?”

“There are certain people who do not have gender identities that apply to female and male, so we think our language needs to be more inclusive on how we deal with complex issues,” Young responded.

Fast forward three months, and – conveniently – “birthing people” is now out and “women” are back in, for this administration and for so-called “women’s rights groups”:

Out: Birthing person In: Women pic.twitter.com/QwVDcOH6Mq

Amazing how quick the “pregnant people” stuff goes out the window the second there’s a political point to score pic.twitter.com/3L7l35pakS

It’s hard to know what to be more offended about here – that women continue to be used and manipulated like pawns by Democrats to suit their political purposes or the fact Psaki assumed Owen Jensen’s gender. Decisions, decisions… (hey, it’s their rules, right?).

No, it’s a Birthing Person’s Choice.

Men are Birth People Too.

So Abortion is NOT a women’s health issue.

Welcome to the new world – where women’s right are diluted more and more every day. Men can also now plat women’s sports and take all the medals. But it’s all fine – notice no feminists are marching with Pussy Hats – like they did when Trump was elected. Nope. As long as its WOKE – it’s all okay.

I would think that the ones that are born would be called birth people since it’s their birthday. And the ones that give birth are birthers.

Actually, they call them breeders. Birthers are people who don’t believe Obama was born in the USA.

How do you know that?

I’m waiting for someone to throw a pie in her face.

Logic, reason, and rationality are racist and oppressive tools of ‘white supremacy’ and ‘systemic racism’ and the Patriarchy.

Which makes being logically consistent racist and misogynistic, too

What matters are feelings and emotions and ‘lived experiences’ and ‘personal truths’.

Logic, Reason and Rationality are how you advance a society and a civilization.

I think we are starting to understand better why Asia and Europe were (and are) so much further advanced than other regions of the world.

Only dummies would advocate against Logic, Reason and Rationality. So, why are we all listening to the dummies? How did they get to be in charge?

“ So, why are we all listening to the dummies? How did they get to be in charge?”

I bet you read that in “Voting for Dummies”

Received in email 2 days ago:
“I voted Democrat last time. I’ll do it again next time.”

Regardless of what damage has been done in the last 2 weeks, what may be done in the next few years, who is running on either side, no idea what the platforms will be, this is the “logic” of those voters.

Famous last words when the country is a smoldering ruin will be “But I voted my way.”

These emotions need to elb and flow a lot….

If the reporter had his shit together he would have responded:

1) Did you just assume my gender?
2) Are you now going on record that trans women aren’t real women?
3) Is there any of this Nurse Ratched grade horseshit that comes out of your mouth that even YOU believe?

Psaki laid out the WH position that we can only comment and question those things that we have personal experience in. That’s going to painful as that framework is repeatedly stuck where the sun don’t shine until she and the WH recant.

Biden has no personal experience in most things – never run a business for example. Yet he makes decisions that impact millions.

Maybe he should only decide on ice cream, Corn-Pop and other things he has actual person experience doing.

So hard to take these fools seriously because of things like this. Unserious people pretending to be serious.

You don’t just get to control the narrative anymore leftists.

Sounds pretty sexist to assume that men have no say in the life of their unborn child.

A conspicuous lack of questions asking if “my body my choice” applies to covid vaccines.

No, that only applies to situations where killing unborn babies is involved.

Wait, so now men can’t be pregnant? That’s going to disappoint a lot of man-bun-wearing beta soy boys out there.

LMAO. These people really are lunatics aren’t they?

HAHAHA. Oh we are in for it soon my fellow citizens.

Keep your powder dry and your Mike Liddel pillows close. 🙁

What in the living fuck are these Democrats talking about now? Birthing people? I give up.

Somehow irony is too ironic. If only birth capable persons can validly comment on killing unborn babies, what about at the mentals who identify as vaginally capable?

No, there will be no answer. These luntics simply need to be physically removed from society.

There simply is no other answer to this lunacy.

“ Zeus snatched the fetus and sewed it in his thigh.”

Nobody’s snatching fetuses created by acts of intercrural sex, and sewing them into the bodies of these women.

And when it happens, this snatching, this sewing, none of these women is man enough to unsnatch at their own expense. The want jenpsaki to pay the surgeon.

And jen doesn’t have the money.

Democrate: HOW DARE YOU RIP BABIES FR THE ARMS OF THEIR MOTHERS AT THE SOUTHERN BORDER!!

Also Democrats: HOW DARR YOU STOP US FROM RIPPING BABIES FROM THE WOMBS OF BIRTHING PARENTS!!

So where does NOB (National Organization of Birthers) stand on this?