A look at the sacrifice of Major LeRoy W. Homer Jr., and the choices made by Lt. Gen. Marc Sasseville and Heather Penney on that terrible day. 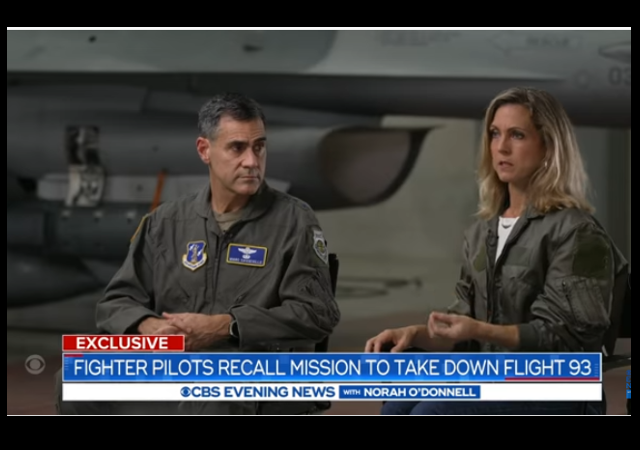 As we reflect upon the 20th anniversary of the September 11 attacks on this country, I am sure many of us recall exactly where we were and how we spent that day.

At the time, I was six months pregnant with my son. I recall the phone call that woke me up, watching the TV long enough to understand the gravity of the situation, then staying away from the news for the remainder of the week so that I wouldn’t stress myself (given my condition).

Little did I realize that my child would be heading to the United States Air Force Academy (USAFA) and plan on a career of military service to this nation. As we marked the 20th anniversary, I wanted to share a few items about some of the U.S. Air Force heroes of 9-11.

To begin with, USAFA has a Cadet Exemplar Program, in which each Academy class honors and identifies with a past military giant, alive or dead. For my son’s class of 2024, which is comprised of children born close to this date, it is fitting that the exemplar chosen is LeRoy W. Homer Jr.

Major Homer, a USAFA graduate from the Class of 1987, was the First Officer of United Airlines Flight 93. Flight 93 was hijacked as part of the September 11 attacks and crashed into a field near Shanksville, Pennsylvania. Evidence suggests that he, as well as Captain Jason M. Dahl, struggled valiantly with the terrorists and that Dahl rigged the autopilot so it would not  function before succumbing to an attack.

Her story is her search to understand the last seconds of her husband’s life, to cope with his mindless death and to put his murder at the hands of Osama bin Laden’s air pirates in what she believes is the proper context.

“Essentially the battle — the fight against terrorism — started in the cockpit. It started with Jason and LeRoy,” Homer told The Canadian Press in an interview.

“It was a combination between passengers and crew, but it started in the cockpit.”

The story of Flight 93 became one of the few straws for Americans to grasp while in a sea of raw shock. A passenger revolt forced the airliner down before it could reach the terrorists’ intended target of Washington, D.C.

Homer wants everyone to know what she believes: her husband LeRoy and Capt. Jason Dahl launched the resistance against Al Qaeda’s suicide squads even if they were cut down before the final confrontation.

The second item is an interview with two U.S. Air National Guard fighter pilots, who set out on a suicide mission when they scrambled without ammunition to stop Flight 93.

Lt. Gen. Marc Sasseville and Heather Penney ‘knew immediately, as soon as we saw the images, that we needed to protect and defend,’ Penney told CBS.

In no time the pilots took it upon themselves to take off in their F-16s at Andrews Air Force Base in Maryland and set out on a kamikaze mission to take down United Flight 93 – the rogue plane they knew was flying low and not communicating with air traffic control.

Flight 93 departed from Newark, New Jersey, around 9.30am and was scheduled to land in San Francisco. Forty-six minutes into the flight hijackers took control of the Boeing 757 and turned the plane around to head toward Washington.

The pilots planned on flying their F-16 into Flight 93. ‘Our only choice was going to be to ram the airliner,’ Penney told CBS, adding that Sasseville took the cockpit ‘to aim at the terrorists’ and she ‘would take the tail’.

‘Sass and I fully expected to intercept Flight 93 and take it down,’ Penney said. ‘I genuinely believed that was going to be the last time I took off. If we did it right, this would be it.’

We are blessed to have so many exceptional men and women willing to serve and sacrifice for this nation.

Hit the top of something with the bottom of your airplane so you can eject afterwards. At least everybody but the last guy can do that. Tail surfaces would be a great target.

Why were the F-16 fighters unarmed? Was this some kind of policy?

I have had the pleasure of meeting Lt. Gen. Marc Sasseville. On 9-11, his second mission was to escort Air Force One back to Washington D.C. By that time, air to air missiles had been loaded on to his F-16. See https://www.ngaus.org/magazine/conversation-lt-gen-marc-h-sasseville