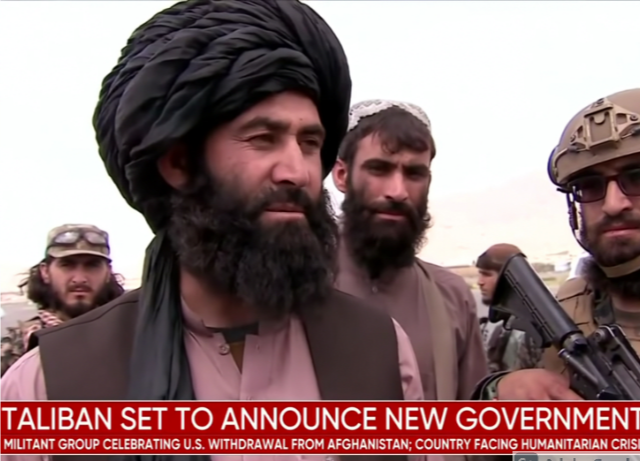 Islamic terrorist group Al Qaeda congratulated its ally Taliban for the “historic victory” in Afghanistan and called for worldwide jihad.

In a statement released on Wednesday, al Qaeda urged the “Muslims masses” to “prepare for the next stage” of jihad to establish Islamic rule from Arab North Africa to the Middle East.

In light of the weak U.S. leadership on the international stage under President Joe Biden, the terrorist group gave a call to intensify jihad in Yemen, Indian Kashmir, and Palestine — a reference to Israel, al Qaeda’s official statement said.

Al-Qaeda has welcomed the “historic victory” of the Taliban in Afghanistan following the withdrawal of US troops, and urged followers to respect the group’s authority.

Al-Qaeda’s leaders praised the Taliban for its “humiliating defeat” of America and proclaimed Afghanistan, where the US fought a 20-year-war, the “graveyard” of Western imperialism.

“This victory demonstrates what the Islamic nation is capable of when it unites (and) proves that the way of jihad is the only way,” the group said in its first official statement on the developments in Afghanistan. (…)

“It’s time for you to prepare for the next stage of the struggle. This historic victory will open way for Muslim masses to achieve liberation from despotic rule of tyrants who have been imposed by the West on Islamic World,” the group’s first official statement on the developments in Afghanistan.

The call for jihad in India’s neighborhood alarmed New Delhi. “While US President Joe Biden claimed victory in Afghanistan after what he called decimating of Al Qaeda and killing of their leader Osama bin Laden, the Al Qaeda statement shows the group is alive and kicking in Afghanistan,” commented the leading Indian newspaper Hindustan Times.

Taliban’s sweeping victory over the Afghan military has encouraged Islamic terrorist groups all over the world. The Gaza-based terrorist group Hamas has also welcomed the Taliban victory.

The Narendra Modi government has noted with concern the statement issued by Taliban affiliate Al Qaeda on Tuesday praising the Sunni Pashtun US-designated terrorist group for humiliating and defeating American forces and then expelling them from Afghanistan and virtually exhorting the Islamist forces to launch global jihad to liberate Palestine, Islamic Magreb, Somalia, Yemen and Kashmir from the enemies of Islam. (…)

On Tuesday, Al Qaeda called on the Taliban to “liberate” Kashmir, Palestine, Yemen and other “Islamic lands” just as they liberated Afghanistan from the US occupation. In a message congratulating the Taliban, the terrorist group said that the victory of insurgents in Afghanistan demonstrated what the Islamic nation is capable of, adding that “jihad is the only way” towards “victory and empowerment”.

While President Biden is patting his own back and celebrating his Afghanistan withdrawal’s extraordinary success, the Taliban is building its regime based on the Iranian model.

“The Taliban are preparing to set out their new Islamic government imminently, naming Sheikh Haibatullah Akhundzada, the insurgency’s top religious leader, as the country’s supreme authority, according to a Taliban official,” The New York Times reported on Wednesday.

The Bloomberg News reported the formation of the Taliban regime:

The Taliban and other Afghan leaders have reached a “consensus” on the formation of a new government and cabinet under the leadership of the group’s top spiritual leader, and an announcement could come in a few days, an official said.

Taliban supreme commander Haibatullah Akhundzada will be the top leader of any governing council, Bilal Karimi, a member of the group’s cultural commission said. Mullah Abdul Ghani Baradar, one of Akhundzada’s three deputies and the main public face of the Taliban, is likely to be in charge of the daily functioning of the government.

By modeling its Islamic Emirate on the Iranian theocracy, the Sunni jihadist group Taliban paying homage to the Shia Mullah regime. Many top al Qaeda operatives, including the group’s second-in-command Abdullah Ahmed Abdullah, were harbored by Iran after U.S. troops entered Afghanistan.

Reports indicate that U.S. weapons and armor that fell into the hands of the Taliban have been spotted in Iran. Following the hasty withdrawal organized by the Biden White House, an estimated $85 billion worth of American military equipment could have come into the Taliban’s possession.

An Iranian Telegram channel that covers military stories has released these "exclusive" images that purportedly show humvees and other military vehicles spotted on the Semnan-Garmsar road in #Iran.

What I am certain of is that those are humvees and that is an Iranian road. pic.twitter.com/QoSnTH5oT0

It is not only a matter of U.S. military hardware falling into the hands of Iran and other international jihadi groups. The weapons cache captured by the Taliban includes state-of-the-art military technology, such as drones, aircraft, and communications gear. Iran, which has deep military ties to China and Russia, may end up acquiring these technologies.

They are parading all of our military equipment in public, clad in our military’s uniforms. Why aren’t we destroying it? Forget about “over the horizon” phony operations where we won’t even name the two “high level” Al Qaeda terrorists we purportedly killed. Destroy that equipment now while we still can! I don’t care how many of the terrorist larva and queen bees get killed. That’s the defense’s concern, I am talking about OFFENSE!

Then let’s take back Bagram. This isn’t complicated. We are just determined to lose in the worst possible way and then lying to American citizenry where we are expected to “move on” past this like “our” side is trying to make us “move on” about the stolen 2020 elections.

The stupidity is all around us, even on “our” side.

They OBVIOUSLY want the Taliban to have those weapons.

Not two days after we left in shame — Biden people already are talking about potential collaboration with Taliban. What ?

And as reported on LI and elsewhere, head of CIA met with Taliban leaders in August. Why?

Something smells. It smells like Biden made some kind of alliance with Taliban.

I know it’s hard to believe – sounds like playing with fire – but that’s how Biden/Obama think. Just like when Obama enabled ISIS to take form and grow. He thought ISIS could be used against Syria. Then ISIS started cutting off heads of Americans and Europeans. When will Biden and the idiots running America learn that religious fanatics have their own agenda – and they will not just do what we say or what we want.

To kill the chinese and russians.

As I have commented in other threads, the weaponry was left there so the the Taliban may do something our next Neocon president doesn’t like. Then, it will be time to send our most healthy and intelligent breeding stock to be chopped to pieces. Our population will be replaced with 2-digit IQs from south f the border, and anywhere from average to highly intelligent, fast-breeding people of a religion hostile to the nation and its principles.

This is the continuation to the Arab Spring where Zuckerberg flew to Egypt to teach the terrorists how to use Facebook to coordinate their operations. We need to arrest the Masters of the Universe. It’s like stopping the Borg, decapitate the machine.

Roger that. This wasn’t some “botched” something or other. This betrayal was enemy action.

Now onto wiping all the “extremists” and others who won’t use the correct pronouns from the US military.

Not only those in the military.

Prepare to be branded ‘American Taliban’. And treated by the regime accordingly.

No, that doesn’t mean pallets of cash will be arriving at your front door. That cash is only for foreign Taliban. ‘American Taliban’ will be treated a bit more harshly.

You mean pallets of my cash that they took from me….or printed to later take from my kids/grandkids.

So when they compare me to the Taliban, does that imply they believe I will win and kick their pronoun-confused-diversity-obsessed asses off the continent?

Do you still think mean tweets are as bad as it gets?

No, I thought Glenn Beck rubbing cheetos on his face was as low as it goes. Cheetos Challenge: Who Can Get Their Face as Orange as Trump’s? Glenn Beck is responsible for all the Orange Man Bad meme and that probably hurt Trump a lot.

And a tone-deaf Ted Cruz handing out teddy bears and soccer balls to illegals crossing the border with Beck before they took the “American Moses” tour with Cruz’ crazy dominionist dad.

There is surely a tragicomic irony to be found in vile Xi-den and his Dhimmi-crat puppeteers/chaperones/handlers/cabal arming the global Muslim terrorist movement — including the perpetrators of the 9/11 Muslim terrorist attacks — with nearly $100 billion worth of U.S.-made weapons and materiel, paid for by American taxpayers, as the occasion of the twentieth anniversary of those attacks approaches.

Will Xi-den’s speechwriters mention this fact, when he gives his scripted remarks at the twentieth anniversary remembrance of the attacks?

At any rate, I expect ugly and vile Muslim supremacists and terrorism supporters, Rashida Tlaib and Ilhan Omar, to finally stop complaining about the amount of annual military aid that the U.S. gives to Israel, now that Xi-den and the Dhimmi-crats have gifted twenty-fold that amount to their terrorist brethren.

Imagine you are a US citizen stranded in Afghanistan, abandoned by Joe Biden, sociopath, and his regime.

Do you feel safe?

It only gets worse from here.

“Calls for Global Jihad”
You own all of this, Democrats.

Calls for Jihad are a declaration of war, we should be giving them what they want, no troops on the ground, just rain fire and brimstone upon them.

Will any Leftist pay heed?
I doubt it.

This is the way Biden wanted it. So did Harris. So did Pelosi. So did Schumer. So did McConnell. So did Paul Ryan.

As for Kevin McCarthy? Who cares about that milquetoast.

If you haven’t read Don Surber’s blog, you should:

Biden wanted to crow that he ended the “forever war” – but he did it by surrendering.

I’m going to have to tread lightly. In my minds eye, so to speak, I’m listening to the beating heart of my Mustang. I’m thinking Ford vs. Ferrari. Ford wins.

What the hell were you people thinking? I leave the country for 20 years, I come back to find you gave everything away. How do I explain this to my nieces and nephews? And it didn’t even take 20 years; you gave it away in a shorter amount of time.

Look, I freely admit my own contribution to this disaster that is Biden. Hey, I was thinking, maybe I shouldn’t be spending all my time in foreign ports. Maybe I should sail this ship back home. I didn’t. My bad. Really, No kidding. I’m wondering how I can face my dad and uncles in the afterlife. I couldn’t stop Biden? Biden?

Damn, I wish I could be in four or five places at once.

I realize I’m not making much sense. Because I’m so angry I can’t see straight.

What do I tell Dan?

I understand we had to leave. I wanted to leave. But tossing up our hands and just surrendering? Forgive the f&&& out of me that was never in my cards.

Tell me. I wanted pay back.

Saying, “F*** it” and diving off a cliff does not constitute a plan. I am evolving one. Give m3e a few. Like I need more than a few..